Arthur Gets Woke For Kids, Has Mr. Ratburn Marry His Husband In A Gay Marriage

PBS Kids decided to drop a bombshell on unsuspecting viewers. During the 22nd season of Arthur, the episode rolled out a sociopolitical shocker: Mr. Ratburn is gay. But the shock drops didn’t end there, PBS decided to push even further… Mr. Ratburn got married to his gay partner.

The news has gone viral online following an article from TVLine.com, which recounts how the moment occurs, writing…

“[…] the gang spots Mr. Ratburn having lunch with an uptight woman (voiced by special guest star Jane Lynch), who tells Mr. Ratburn that he’s “too soft” and needs to “toughen up.” They decide that marrying her will make Mr. Ratburn miserable, which will then make his students miserable, so they set off to nip the nuptials in the bud. Little do they realize, the woman in question is actually Mr. Ratburn’s sister, who just wants the best for his big day.

“Arthur and his gang of mostly recognizable animal friends show up to the wedding ready to object, but when they see who Mr. Ratburn is actually marrying — not to mention how happy the couple appears — they decide not to sabotage their teacher’s big day, after all. […]”

The moment takes place during the middle of the episode, which you can view over on the PBS Kids website. 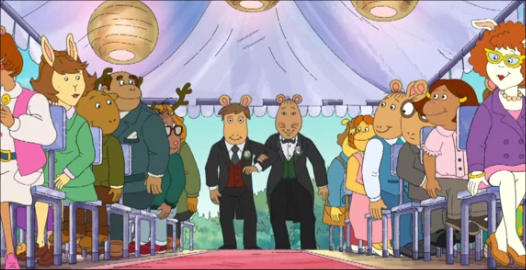 The real shocker? It’s not just a gay marriage by the way, it’s an inter-species gay marriage.

The kids are depicted as responding happily knowing that Mr. Ratburn is marrying another man/rat/etc., than someone they thought was pushy. Even though the show doesn’t really bother to explain why they would be happy Mr. Ratburn was marrying someone that just as well could have been bad for him.

Anyway, most of the comment section on TVLine and people on Twitter are ecstatic about this because they obviously want to inculcate kids with the concepts of gay marriage, drag culture, and transgenderism.

There were a few people who offered pushback against the encroaching of Left-wing sociopolitics taking over kid’s media, with users like Tracer explaining that she was appalled at the show indulging in such topics. 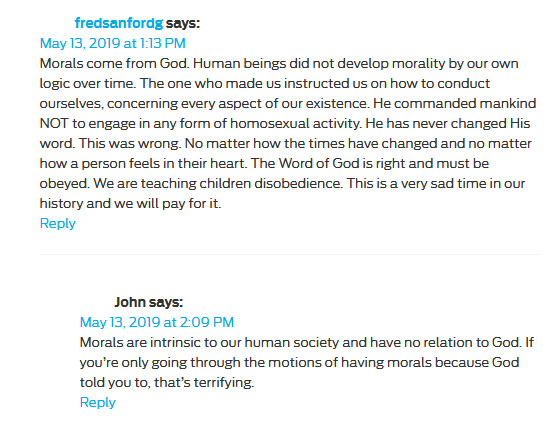 People wanting to prevent kids from being inundated with the kind of overt politicization we see in every other form of media were overwhelmed by the Leftists who justified the show promoting homosexual marriage.

Things took on a completely different flavor on Twitter, where there’s practically zero major pushback or if there is it’s not showing up often in the trends.

Mr. Ratburn managed to go viral on Twitter where a lot of people are patting each other on the back about the news.

This episode was wild too, Arthur and his friends thought he was marrying this pushy woman and tried to break them up only to find out the lady was his sister and Mr. Ratburn was marrying the guy from the chocolate shop they went to earlier in the episode https://t.co/mOXjvjBw34

Mr. Ratburn is trending which is as good a time as any to remind the world that pic.twitter.com/mRtwFBzV8i

Ya’ll still tweeting about GoT when Mr.Ratburn just got married on the season priemere of Arthur smh pic.twitter.com/jUokguYXcr

Mr. Ratburn is the gay icon I never knew I needed pic.twitter.com/wp4o5TLr1p

The media are also unironically championing for pushing sociopolitical messages into kid’s shows, with outlets like Buzzfeed chiming in to further signal boost the message.

“Arthur’s” Mr. Ratburn Came Out As Queer, So I Say Hey, What A Wonderful Kind Of Day! https://t.co/csLGK6cLal

There are a few scattered responses among the throng of support for PBS promoting a gay marriage in a kid’s cartoon. Some people pointed out that this was the sort of thing people complained about when they said that the gay agenda was expanding.

Remember when we were told there was no “gay agenda” and they had no interest in coming after children?

Few people questioned the intent of the move, saying that it seemed like a way for PBS to promote the LGBTQIA agenda, and they didn’t really feel it was natural.

I don’t know bout this. I always question when a show introduces a gay character or haves a already known character comes out as gay because they wanna market to the LGBT to make more money especially after JK Rowling

Others just wanted some kind of sanctity maintained for the shows they grew up with… a sense of honesty and integrity for the original intention of the show: to help kids establish sound, respectable values.

Childhood ruined. What’s next? Rugrats reboot where Stu leaves Didi, and marries Chaz? Jesus fucking christ. Can just ONE thing on this planet go without being politicized for fucks sake?

This isn’t even the first time that Arthur has dabbled in the risque taboos of sexual politics. As pointed out by ThΔt Desert Waff,
‏ there was an episode of Postcards From Buster from back in 2005 or so that was banned for depicting lesbian mothers while Buster was on a trip. The episode received enough backlash to get pulled, as reported by a piece published on January 27th, 2005 by the New York Times.

Of course, the episode managed to make its way around the net, and became something of a legend within the LGBTQ community.

Nevertheless, this has become a common trend in almost every major show these days, especially those aimed at kids. We saw Adventure Time turn Princess Bubblegum into a lesbian, we saw Steven Universe introduce kids to a lesbian wedding, and Netflix’s Voltron went the extra mile to make the main character gay.

This kind of escalation is becoming more and more commonplace, especially for kid’s shows and material aimed at young people. However, those who control the media waves insist that there is no agenda, and that the propaganda that they’ve been feeding you isn’t part of some inculcation campaign to normalize certain controversial themes.

Worse yet is that you’re not even allowed to criticize it lest you be labeled a “bigot” or a “fascist” or a “homophobe” or a “transphobe”. The idea is to diminish any sort of critical thinking levied against what they want your child to watch and what they want you to believe. Dissent is becoming outlawed in the court of public opinion.

(Thanks for the news tip king_6225 and ThyBonesConsumed)