Burger King Ad Gets Grilled For Trying To Get Woke

Apparently making money is something that big corporations just don’t want to do anymore. It must not be hip or trendy to make customers want to buy your product. We’ve seen a recent wave of anti-demographic marketing from companies such as Volkswagen, Johnni Walker, and Gillette, and now Burger King is joining in on the fun by promoting depression-culture to a Left-wing audience that doesn’t really exist.

On May 1st, 2019 Burger King uploaded a video with the hashtag #FeelYourWay, which basically celebrates being suicidal, depressed, degenerate, and forlorn. The short clocks in at just under two minutes, and you can check it out below.

The short features a black kid feeling depressed, a white girl in high school who was called a “skank”, an Asian chick who infers that her boss is sexist, another black kid who was dumped, a Hispanic teenage mom, and a Middle Eastern dude who is stuck living with his family because of student loan debt. Each of them lament their situations in life, and that’s basically how their stories start and end.

The commercial concludes with the message…

It then rattles off the typical hipster lingo-based meals, such as “Yaaas Meal”, “Salty Meal”, “DGAF Meal”, “Blue Meal”, and “Pissed Meal”.

Normal people were not impressed.

The comment section also grilled Burger King for trying to be woke like Gillette, criticizing them for an ad that did little to actually make anyone want to buy the product. 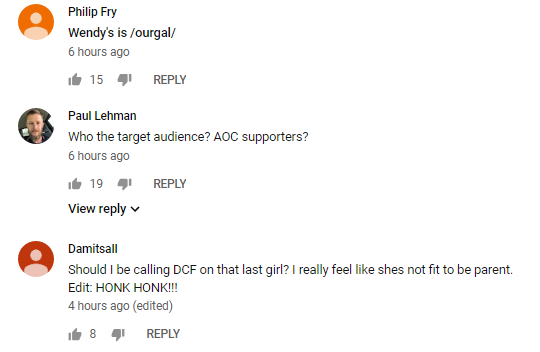 The comment section roasts Burger King more than third-trimester babies from an abortion clinic get roasted at a spirit cooking.

The entire message of the advertisement was that it’s okay to be depressed, degenerate, and in-debt, and that they have meals that support these lifestyle decisions and choices, which seems to be counter to what you would want from your customers. As some of the commenters pointed out, they should be encouraging people to want to buy their product, not veer away from it.

While the political lines aren’t nearly as defined as what Gillette did, which had a very obvious feminist slant to its anti-male message, Burger King is still running propaganda along Leftist lines. The fact that there wasn’t one white male featured in the commercial was quite telling, much less a straight, white male. This was especially glaring for an ad supposedly dealing with depression given that white males made up for 69.67% of suicide deaths in America in 2017, according to the American Foundation for Suicide Prevention. That means there’s a vast under-representation in the ad for the core demographic who makes up majority of suicides and depression in America.

This anti-white messaging from media corporations is another obvious Regressive Left tactic that we’ve seen employed by the media and big tech alike. Headlines are obvious and rampant throughout the entire web decrying and denigrating white males, and any semblance of traditional structure within Western culture.

Burger King joining in on the jostling of straight, white men is corporate suicide.

While the effects may not be immediate, people will remember.

For instance, Gillette thought they were slick, attacking their core consumer demographic. But it backfired, as reported by Law Enforcement Today.

“In North America, Gillette once claimed a 71% market share… but it’s down to 59%, according to Fortune. Startups like Harry’s and Dollar Shave Club are leapfrogging Gillette in the online razor market.”

As noted in the comment section of the Burger King ad, plenty of people have already started ginning up active support for Wendy’s and McDonald’s. Heck, this kind of ad drumming up all sorts of negative feelings from potential customers is the complete opposite of how people reacted to Arby’s waifu ads, which actually managed to get the community involved and producing some interesting artwork out of the campaign. I tend to doubt there’s going to be a lot of productivity coming out of the community on behalf of Burger King’s depressing ad.

Now if the ad’s condemnation manages to go viral – just like it did with Gillette – expect a market share dip over the course of the next several months.

(Thanks for the news tip KillerKap)