I have no idea how popular Five Nights At Freddy’s VR: Help Wanted will be, but it’s the sort of franchise that has garnered strangely large amount of fans due to its weird lore and creepy animatronic cast of characters. Nevertheless, FNAF VR: Help Wanted has a bevy of gameplay walkthroughs up and available to coincide with the game’s release on the HTC Vive, Oculus Rift, and PlayStation VR for the PS4. Gamers in need of help with the latest entry in the horror title can find a few hints right here.

The main objective of the game is to collect as many coins as possible, as well as the cassette tapes, both of which are scattered throughout the different levels. As you collect the tapes and coins, you’ll piece together the story involving the VR game from Fazbear Entertainment, and the mystery animatronic haunting the developers.

YouTuber FusionZGamer was one of the first Youtubers to put together a complete playthrough for the new VR horror game, and you can check out the full Five Nights At Freddy’s VR: Help Wanted gameplay walkthrough below.

Scott Cawthon’s Five Nights At Freddy’s VR starts with a Fazbear Entertainment roller coaster ride that covers the previous events of the past games leading up to the current events.

Dark Rooms is a collection of mini-games from the previous games, while Parts and Services allows you to fix the different animatronics. The trick with Parts and Services is that you have to follow the instructions. If you mess up then it will fail and you’ll have to restart.

You’ll likely want to start with the first game on Night 1 with Five Nights At Freddy’s 1.

At the start of Night 1 you’ll get a message from Scott. On top of the television to the right there’s a coin under the paper. Pick it up to collect the first of three coins in the level.

You’ll need to monitor the cameras for Bonnie, Chica, and Freddy.

The first night isn’t that hard. Just listen for the animatronics coming up on the left or right side of the office, and keep an eye on the cameras so you know when they get close to the office. Just shut the door and turn on the lights to keep them away.

Rinse and repeat until it hits 6:00am.

You’ll need to use the lights to check the hallways because there are blind spots in the hallway.

Use the lights when you don’t see the animatronics in the camera feeds.

If you don’t see them on the camera feeds then it means they’re moving through the blind spots.

The trick with Night 2 is that they move rather quickly so if you see that they’ve moved past the 2A camera then it means they’re on their way to the office.

Remember to conserve your power by focusing on only using the lights.

Night 3 will feature Chica and Bonnie coming down the hallways, while Foxy will move through the party areas.

Now unlike Night 1 and Night 2, you will have a very limited amount of power during Night 3. The thing about Night 3 is that you will automatically start losing power.

So your tactic for Night 3 is to close the doors once you hear movement coming down the hall from the left or the right, and limit the amount of time you spend turning on the lights.

Another thing to keep in mind is that Foxy moves terribly fast when coming down the hall, so once you hear the pitter patter of Foxy, instantly shut the door.

Foxy will typically come from the left and will bang on the door for a while.

Chica, meanwhile, will typically come from the right. If you can’t find Chica on the cameras then it means that Chica is making its way to the office, so prep to shut the door down. You have to limit the amount of times you use the lights to conserve power and make it to 6:00am. 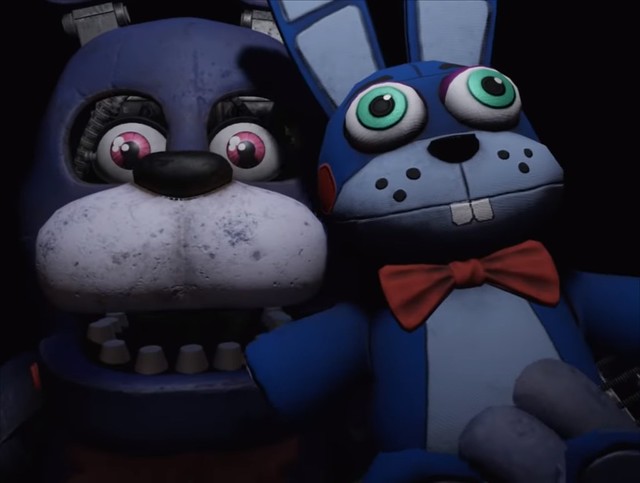 This get exceptionally hard on Night 4.

You’ll have to not only work smart and work fast with monitoring the cameras, but you’ll also have to listen very closely to any kind of movement from the animatronics.

The smart thing to do is to keep the animatrons in view on the cmaera so that they won’t approach you. Once they leave the purview of the cameras you’ll need to listen closely for their footsteps to ensure that you don’t get caught blindsided.

The real trick for Night 4 is limiting your use of the doors by maximizing your use of the cameras to keep an eye on the animatrons. It will be cutting it close but you should have just enough power to make it to 6:00am before everything shuts down on you.

YouTuber Dawko has up a walkthrough of the game as well. At the start of Night 1 for Five Nights at Freddy’s 2 there’s a video tape you can acquire stuffed inside a box on the bottom right corner of the screen.

Now the trick with the music box is that you have to hold down the music box button to recharge the little white circle on the screen that counts down. The circle works as a timer, and if it completely depletes then you’ll get killed.

Just hold down the music button to keep the timer as full as possible. 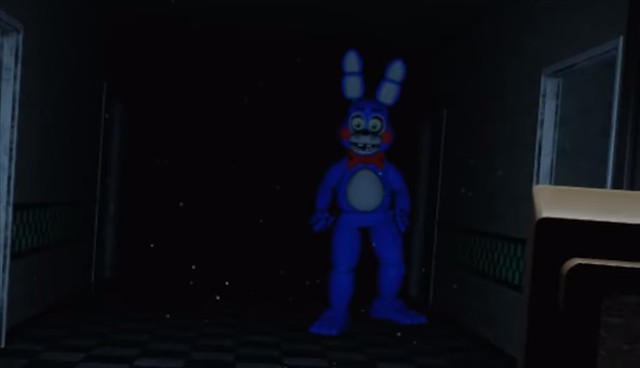 If you do well enough, you’ll be given a prize at the end of the level.

Keep your eyes open for coins. There will be three coins available for each night.

For Night 2 there will be additional animatronics that will come at you.

Foxy will creep on you from the doorways. You’ll hear a sound cue when Foxy appears, so just shine the light on him to make him go away.

You also don’t have to put the mask on until the animatronics get close when they’re coming down the main hallway. 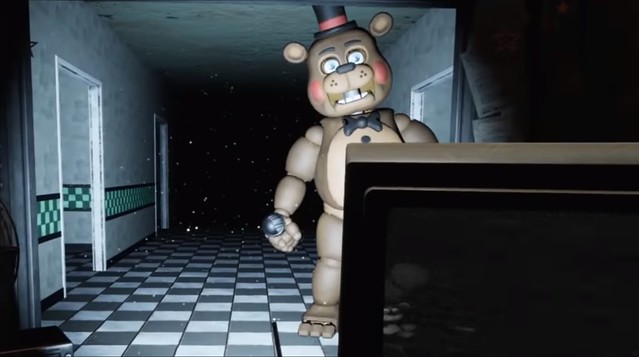 In some ways Five Nights At Freddy’s 2 is actually easier than the first entry, mostly because the mask makes it easy to avoid being pimp-slapped by the robots.

During the third night the funny thing about it is that the phone message from the manager will go all the way up to around 1:30am, so you get spared an hour and a half before they start pestering you.

Once it hits 2:00am, though, things ramp up quickly and dangerously.

Balloon Boy will come out of the events and you ‘ll need to quickly put on the mask. Foxy, Bonnie, and Freddy will also approach you. Be sure to keep the music box playing at all times.

Keep up your tactics up to make it through the third night. 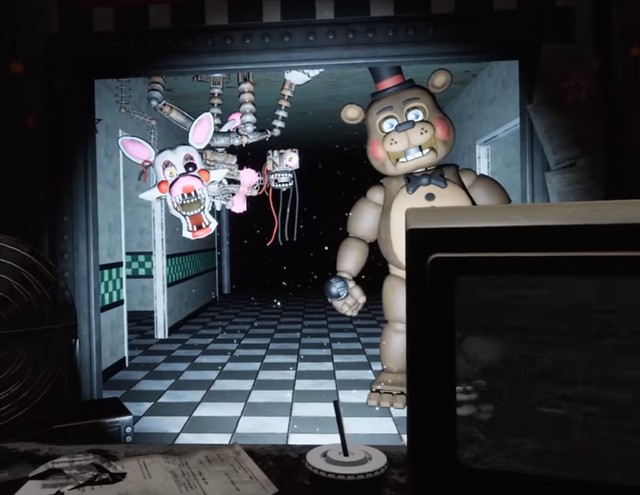 Once again there’s a lengthy phone message from the manager that will spare you an entire hour.

When the phone message ends the animatronics will instantly start harassing you.

They will come down the main hall first and then start terrorizing you from the left and right air vents, followed by a barrage of more terror from Freddy Fazbear.

Just like in the previous nights, keep the music button pressed and only put the mask on when they come down the front hall when they duck under the doorway and come into the office.

Five Nights at Freddy’s 2 isn’t quite as difficult as the others, but it does require a lot of movement and micromanagement.

At the start of the level you’ll find one of the gold coins under the table. There’s also an audio tape behind the recharge station.

You’ll have access to two different cameras, as well as the recharge stations on the left.

You can only have one camera on at a time.

Some of the equipment will fail on you. When there are errors simply highlight the service utility with the flashing error sign and click the “Recharge” button.

Night 1 is pretty easy to get through. There are no animatronics that will come out after you, and it will only give you a taste of what’s to come. 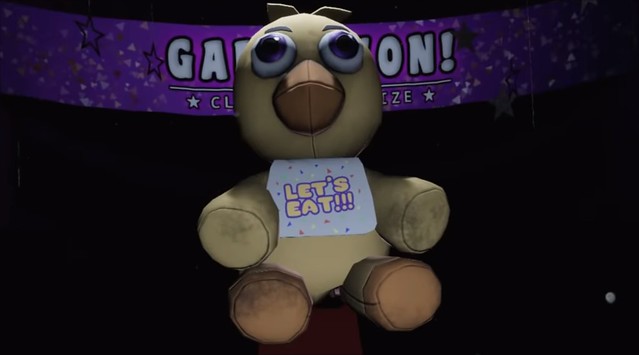 The second night is pretty crazy.

Springtrap will be crawling through the vents and will attempt to get you, along with a dilapidated Freddy Fazbear.

When you see them crawling through the vents you can shut the ventilation shaft door to keep them from getting into the office.

You can use the voice button to keep them lured outside the door.

If you hear the them moving through the ventilation shaft, shut the vent if they get close. However, use the cameras to see where they are. You’re less likely to get aced by the animatronics if they’re moving through the hallways instead of haunting you inside the office or from the vents. 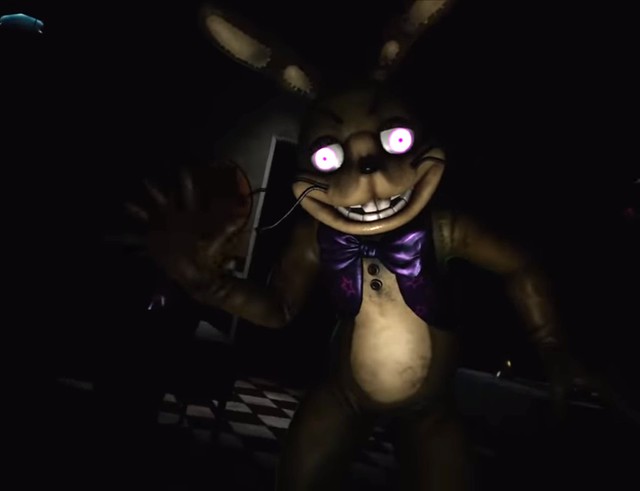 This is actually really easy to complete. However, there are three easy to access coins in the stage.

Proceed to press both the red buttons on the left and right side of the jaw to open up the Bonnie face hatch. Press the button to find out which of the keys are out of tune. Listen for when the sound cue is out of tune and then turn the appropriately colored knob that corresponds with the color cue that sounds out of tune. Once you tune it up properly, press the button to complete that segment.

Proceed to put left and right eye back in and place the face plate back onto the body to complete the level. 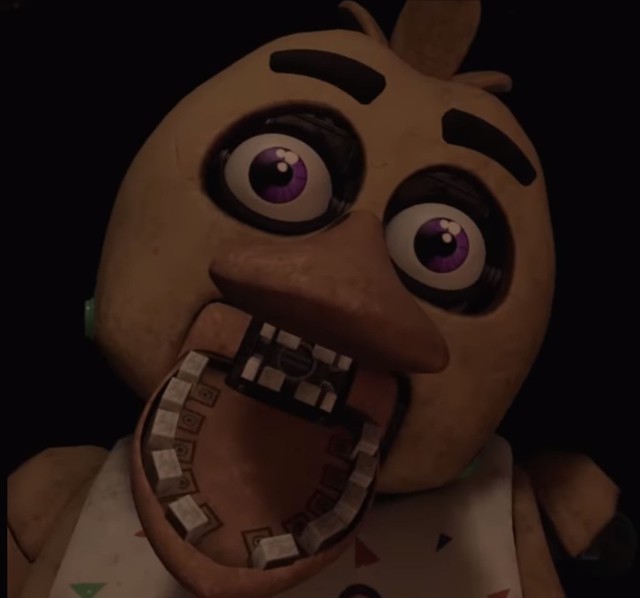 Whatever you do… DO NOT eat the pizza.

You’ll find the first coin is in the trash can. There’s a second coin near the roaches on the left.

The first task is to take all the gross pizza slices and throw them in the trash can.

As the roaches come out, press the button to kill the roaches. Proceed to put Chica’s arm back on and then place the cupcake back into Chica’s hand.