On May 6th, 2019 Kotaku writer Mike Fahey penned a disappointment piece about PQube’s localized version of Red Entertainment’s ‘Mature’ rated visual novel Our World Is Ended for Steam, PS4, and the Nintendo Switch. The piece isn’t just about his disappointment with the game due to it focusing on the kind of content that normal straight males find enticing and entertaining, but he goes one step further by trying to reach out to PQube, Nintendo, and Sony in order to frame an argument for censoring the game on the aformentioned platforms.

It starts like a normal article aimed at a normal gaming audience, describing the sci-fi visual novel’s characters and settings. It’s a futuristic story about a group of designers working on an advanced AR game that glimpses into a potentially dangerous future for the Tokyo-based game developers.

However, Fahey loses focus when he meanders off on criticisms of the game’s characters, specifically the male protagonist who narrates and goes into exquisite detail about his female cohorts, like any normal red-blooded college student might.

The natural state of heterosexual expression depicted in Our World Is Ended was lost on Fahey, who has apparently deigned much of his time and energy worthy only of aberrant fiction, so much so that a normal male character playfully using innuendo to detail the female anatomy came across as a foreign concept to the Kotaku blogger. 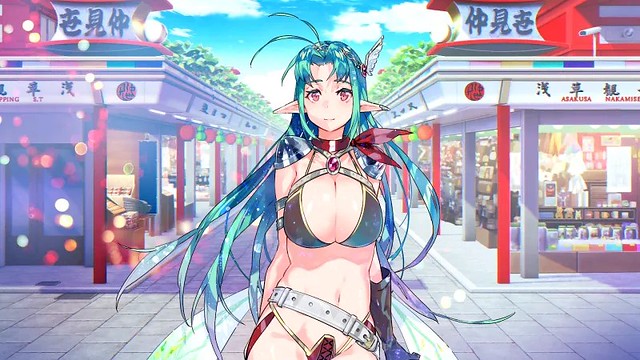 But that was just the appetizer.

Each instance of fan-service or sexual dialogue Fahey encountered in Our World Is Ended chipped away at the blogger’s sanity like a rambunctious child throwing steel ball bearings at a glass scaffold.

Things finally kick into high gear in the second half of the article, where Fahey objects to any sort of tongue-in-cheek gestures involving the character Tatiana, a junior high programming genius from Russia. Fahey’s succinct reaction to his experience with Tatiana was simply…

“I could not handle Tatiana.”

Why? What was so offensive? Well, in his mind Our World Is Ended sexualized the character in ways he found offensive. What sort of sexualization you might ask? Underwear falling out of a suitcase. No, really.

Fahey posted the image from the game that pushed him over the edge, and it was of Tatiana on the ground nearly in tears, accusing the main character of being a pervert while her personal belongings have fallen out onto the ground. 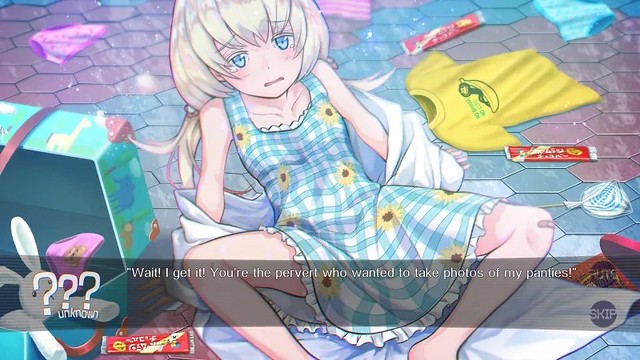 It was at this moment the fragile structure of Fahey’s mind broke.

“We’ve got a child sprawled on the ground. To the left is a case with children’s underwear and a stuffed bunny spilling out. There’s some more underwear scattered about. Off to her right is a lollipop. To top it off, she’s shouting about her panties.

“It’s bad enough that nothing on the game’s official website suggests any sort of overly sexual content. It’s at least rated M for mature by the ESRB, whose description goes into great detail about what’s going on.”

The ESRB page does explain that the game does contain sexual references in dialogue, and that there are is the presence of “some sexual material”. It’s rightly rated ‘M’ for Mature and the ESRB lists that it contains violence, blood, strong language, and… sexual themes.

But warnings, ratings, and actual descriptions to help customers identify what’s in a title wasn’t enough for Fahey.

He needed blood in the water and a victim on which to prey.

He decided to go one step further, contacting PQube about his encounters in Our World Is Ended. The publisher responded to his inquiries with a statement, which read…

“As always, our mission at PQube is to bring games from Asia to the west, taking care to ensure that they align with the original as closely as possible.

“However, we also have a very strong bond with our community and fans and so are always mindful of paying close attention to, and implementing, any feedback.

“Since release we took on board a lot of feedback and have already been reviewing Our World Is Ended to help make improvements to ensure it is as enjoyable as possible to our wider community.”

Hopefully this response to Kotaku doesn’t mean that PQube takes Fahey’s criticisms to heart as a means of censoring a niche game for a niche audience, as it would be a death knell for the game’s sales trajectory due to negative word of mouth, much like what’s happening with Spike Chunsoft and Zanki Zero: The Last Beginning. Many of the people who were intent on buying the game decided against doing so after they discovered the game had been butchered by censorship.

But regardless of what PQube said, Fahey couldn’t simply live with the publisher saying that they were trying to make the game as enjoyable to a “wider community”. Fahey acknowledged that he also contacted Sony and Nintendo about the matter as well, writing…

“I reached out to Nintendo and Sony about Our World Is Ended, passing along a description and several screenshots of Tatiana-related situations, but neither company got back to me in time for publication.”

Nintendo has already stated in the past that they don’t force censorship on third-party publishers or developers, and instead they leave that up to the regional rating boards. Sony, however, has adopted a more fascist-approach to content delivery, forcing censorship on developers and their own gaming audience for content they feel is inappropriate.

While it’s unlikely Nintendo would subjugate themselves to being an attack dog of censorship on behalf of Kotaku, it’s entirely possible that Sony could clip out the legs of PQube from underneath them, since Sony had no qualms about doing that in the past when they banned PQube from releasing Omega Labyrinth Z on the PS4 in the West.

Fahey, however, was proud of essentially being the tattletale for the Schutzstaffel censorship squad.

“Careful trimming could make Our World Is Ended less offensive. It’s murky censorship territory, but I don’t imagine many people complaining about removing the blatant sexualization of a middle schooler from the game.

“Whatever action PQube takes, I am done. Maybe I’ve already seen all of the “racy” interactions the player has with Tatiana, but I’ve seen enough. I will not be finishing Our World Is Ended. I am amazed the game made it onto the PlayStation 4 in North America, let alone the Nintendo Switch. I am a huge proponent of racy console games, but there are limits. This game crossed them.”

Love it when Western journalists call for censorship of games that offend them before then going on to explain that even if those games get censored, they will not actually play them.

They only play these games to find something to be outraged about. pic.twitter.com/WkOPe721nT

Others quickly took this as a means to reach out to PQube and let them know that they should not censor Our World Is Ended, since they would basically be amputating their own sales potential for the sake of a phantom audience.

Fahey was also put on blast by Twitter user fwocvr for having an Etna tattoo on his leg from the game Disgaea. Etna, by the way, is essentially a sexy demon loli. Fahey confirmed that he still has the tattoo. When pressured on how he can be against an innocuous game like Our World Is Ended while sporting a loli tattoo, Fahey prevaricated by saying that the two were different and there was no point in responding.

If you don’t see the difference then there’s no point even responding.

We’ve seen developers do this time and time over again for absolutely no gains whatsoever. Usually heavy censorship leads to poor sales, which is what happened to games like Tokyo Mirage Sessions: #FE, which tanked right out of the gate after word spread about how censored the game was. So all the costs sunk into censoring the game failed to help it reach a wider audience, and it also scuttled any chances of it becoming a sleeper hit among its intended niche audience.

So far PQube has been wise to cater to the kind of demographic that actually buys the kind of games they’re willing to sell. If they hold their guns with Our World Is Ended they might be able to hit the target demographic with flying colors and positive word of mouth, which goes a long way for reputation and sales potential, as opposed to trying to please game journalists who hate fan-service games, gamers, and the companies providing such material.

You can look for Our World Is Ended to launch on May 28th, 2019 on the Steam store for PC, and it’s currently available right now on Nintendo Switch and PS4.

(Thanks for the news tip Animatic and Mikebrand83)