D3 Publisher and Matrix Software’s Omega Labyrinth Life is due out later this year for the Nintendo Switch and the PlayStation 4. However, there are some startling differences between both versions of the game. The PS4 version will simply be known as Labyrinth Life, and the omega symbol has been removed from the title on the PS4, along with a ton of other features.

So basically all of the interactive sequences, the overt fan-service, the ecchi content, and the breast manipulation features are all removed, all gone from the PS4 version. There are still going to be illustrations in the game on the PS4, but the entire “Faint in Agony Flowering” System is gone along with the Oppai Appraisal” System, and they completely altered the “Oppai Rock-Paper-Scissors” System to remove the ability to interact with the boobs.

They also noted that the illustrations of the hot springs will contain more steam on the PS4 version. 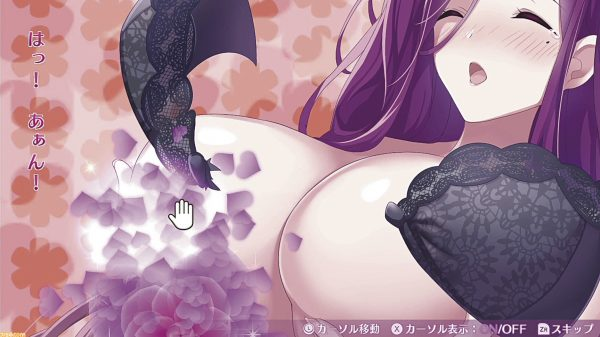 Switch users, however, are able to play rock, paper, scissors using the Joy-Cons to jiggle the girls’ boobs; the hot springs won’t be filled with overt steam; and there are dedicated events on the Switch version featuring interactive touching events, including a specific Pai Touch Action mode where you can touch the illustrations in certain areas and they’ll react to the touch.

The game is shaping up to be quite the “Screw you!” from D3 Publisher to Sony for their creatively oppressive censorship policies ruining a bunch of games. Omega Labyrinth Z got hit really hard last year when Sony forbade PQube from even releasing the game in the West on the PS4, causing PQube some obvious financial duress.

The upcoming Omega Labyrinth Life for the Nintendo Switch and Labyrinth Life for the PS4 are both due out on August 1st in Japan. As you can see, even the logo for the PS4 is censored, showing that not even logos are safe. Hopefully this will be an eye-opener for the typically stubborn Japanese gamers who refuse to give up supporting Sony even though Sony has stabbed the gaming community in the back.

(Thanks for the news tip borrow54 and Voice of Fanservice)