Evil Mojo Games and Hi-Rez Studios held a skin contest for the multiplayer hero shooter game, Paladins. There was one skin that people really liked from Crimean artist Semen Tjumencew called “Impossible Talia”. However, it was disqualified from the contest because back in May of 2018 the artist drew a completely different character from the game as an evil Nazi.

After further investigation into player concerns, the “IMPossible Talia” Talus concept has been removed from Community Skin Contest. In light of this update, we are permitting anyone who already voted to change their vote if they wish.

The link to the Reddit post reveals why the “Impossible Talia” skin was removed from the contest, with Hi-Rez Studios community manager Molly Joseph writing…

“After further investigation into player concerns, the “IMPossible Talia” Talus concept has been removed from Community Skin Contest due to other content by the artist which is inconsistent with Evil Mojo’s values.

“In light of this update, we are permitting anyone who already voted to revisit to change their vote if they wish. If you previously voted for “IMPossible Talia,” you will have to revisit the poll and edit your response to vote for an alternate concept. The polls will still close Wednesday, May 22nd at 6PM ET.”

Obviously the community was left dazed and confused.

You can view the original submissions for “Impossible Talia” over on Semen Tjumencew’s ArtStation page.

But what was the content that was “inconsistent with Evil Mojo’s values”?

Well, it’s mentioned throughout the Reddit thread that it was supposedly an evil Nazi skin rendition of a completely different character that 22-year-old artist Semen Tjumencew drew back in 2018. The original tweet has since been deleted and Google conveniently wiped the cache clean. However, there is still an archive of the tweet in Google Images, which was slow to wipe it from the index. You can view an archive of the image below to see what led to Tjumencew to get disqualified from the contest. 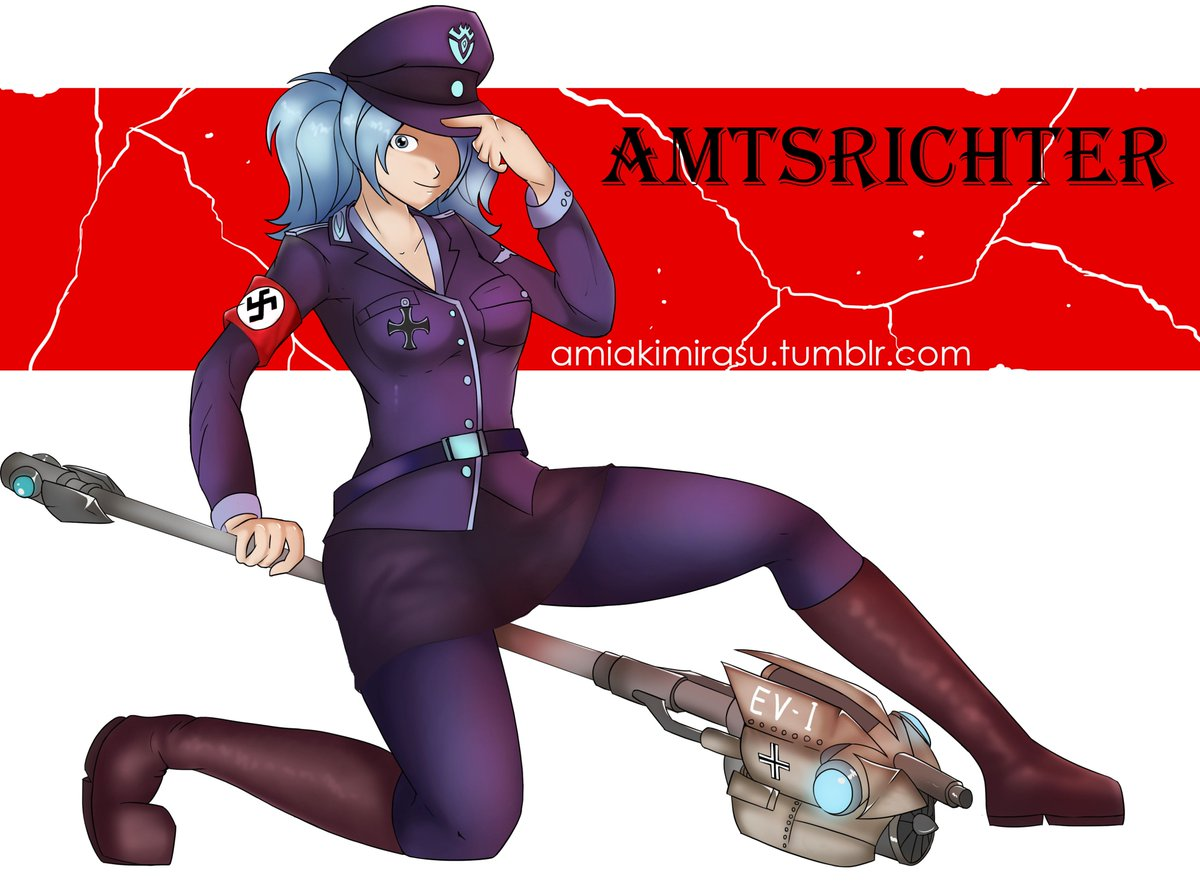 What doesn’t make sense is that Evil Mojo Games is discounting the artist based on the image he tweeted out back in 2018 even though they already knew about the image.

In the original tweet Tjumencew had already tagged the developers into the tweet about the evil Nazi Evie.

The people tagged were all associated with the game. For instance, the official Paladins Twitter account was tagged into the image, along with the community website for the game, and even the general manager and executive producer at Hi-Rez Studios, Chris Larson!

How they missed that I’m not sure. The only explanation is that maybe the former community manager, Alyssa Huskey, didn’t inform them about it before she left back in March of 2019?

Even then, the original tweet with evil Nazi Evie was a year old, so it’s not like it was new.

The real reason the concept art was removed from the contest was actually a lot simpler and more eye-roll worthy than any sort of grand conspiracy.

In the Twitter thread announcing the disqualification of the artist, it’s revealed that various Twitter users had dug through Tjumencew’s profile, dug up the image and complained to Evil Mojo Games about it until they had him removed from the contest.

thanks for listening to community on this one. an artist who finds it okay to draw evie as a literal nazi isnt someone you want associated with your game

Yes, the outrage campaign on Twitter was enough to get Evil Mojo to disqualify the skin.

WAIT PALADINS IS HAVING DRAMA B/C SOMEONE WHOSE FAN SKIN GOT CHOSEN FOR THE CONTEST DREW A DIFFERENT PALADINS CHARACTER IN NAZI GEAR A YEAR AGO?

Tjumencew did respond to the whole controversy by basically giving a middle finger to the people who went out of their way to get him kicked out of the contest due to the old fanart he did from 2018.

And here we go… Fans give you love, support and promotion. But haters trying to put you down by any durty ways. And looks like this time haters win.
“IMPossible Talia” situation really shows me what its ACTUALLY means to be POPULAR. @PaladinsGame @ThunderBrush @HyuugaBB pic.twitter.com/SrcjQEj0SE

Technically, Tjumencew should have been discounted from eligibility right from the start.

Completely unrelated to the Nazi drawing of Evie that Tjumencew drew, he actually never qualified for the contest from the start… if we’re going by Hi-Rez Studios’ own rules.

According to a video posted on May 15th, 2019 by YouTuber Syberbolt, the original skin contest rules for Paladins prohibited those from entering who were in regions where sanctions were in effect.

At the 6:00 minute mark Syberbolt gets into the eligibility of the contest and how Crimea is currently involved in a dispute involving foreign sanctions.

What Syberbolt mentions in the video is correct. If you check the official rules PDF, the eligibility is right there at the top. It reads…

“This Program is open only to individuals residing in the following locations (collectively, the “Eligible Locations”): the United States, Canada (excluding Québec), Latin America, and the Europe, Middle East, and Africa (EMEA) region (excluding Italy). Notwithstanding anything to the contrary herein, participation in the Contest is void where prohibited, including in territories subject to any sanctions programs administered and enforced by the Office of Foreign Assets Control (OFAC) of the U.S. Department of the Treasury.”

Sanctions involving Russia and Crimea are actually still in effect, and have been in effect since 2014. According to a report published on March 5th, 2019 by The Moscow Times, they explicitly wrote…

“U.S. President Donald Trump on Monday extended sanctions against Russia by another year, prolonging punitive measures that were first imposed over Moscow’s annexation of Crimea in 2014. […]

So going by the rules, Tjumencew never should have been eligible from the start, notwithstanding the whole Nazi saga.

Nevertheless, Evil Mojo Games is moving forward with the skin contest for Paladins, only they’ve removed Tjumencew’s “Impossible Talia” from  over on the contest page. Those who voted for it now have to vote for a different skin concept.

(Thanks for the news tip nuhuh)