Tencent (yes the same one that has a high stake in Epic Games), Paramount, Skydance, and 20th Century Fox rolled out the first teaser trailer for Terminator: Dark Fate. I don’t want to call it a mess, but it’s kind of sloppy, very uninspired, and none of the action looks good at all.

A big part of the trailer is focused on the return of James Cameron to the franchise, making it like this will give the film the sort of endearing quality that is a hallmark of the first two flicks. They also tack on Tim Miller’s name as an afterthought, hoping to reel in people who enjoyed the original Deadpool.

The major problem is that none of the action looks good at all. It just looks passe and try-hard and completely uninteresting. Also, all the wire-work and CGI is a complete bust. There is absolutely nothing about that stuff that looks cool. It looks overwrought and under-conceptualized. For instance, what is up with all the flipping and twirling during the fight? Or why not just have a stunt woman climb out of the moving vehicle into the truck bed like they did in Terminator 2? Practical effects with limited wire-work just looks more believable and effective.

Also, the comment section was dead-on bringing out that all the CGI liquid metal stuff is completely boring. There’s nothing scary about it at all. It feels like a cheap ploy rather than something horrific. For instance, the first Terminator was an action-thriller, with the thriller part coming from just how terrifying the original T-800 was. The second film was less scary, but still thrilling in some parts, especially with Brad Fiedel’s theme for the T-1000 played by Robert Patrick.

Here, Gabriel Luna just feels… lame. He’s not intimidating looking, nor is he particularly threatening. I would have preferred if he were a human from the future sent back to the past to protect the Hispanic chick. He looks far more believable as a fragile hero rather than as an unstoppable villain. 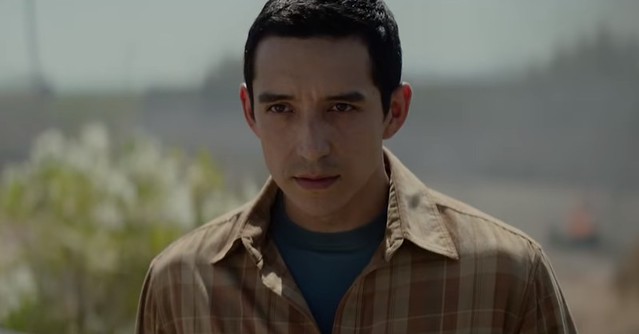 They should have gone with someone much bigger and more threatening. Also, I think they should have stuck with a more mechanical Terminator rather than the whole liquid thing. I just can’t take the whole liquid Terminator seriously. It also renders projectile weapons practically useless, so what’s the point? It makes the action scenes trite, which is what happened in Terminator Genisys where the evil Terminator couldn’t be hurt by blades, bullets, or explosions. It was just pointless to even showcase them shooting him.

Anyway, I could rant all day about what’s wrong with the trailer, and so far I’m not thrilled at all. I’ll still watch it because of Arnold Schwarzenegger but probably on a day during “a sudden, violent, and copious outpouring”.