The non-H visual novel from Katsudou Mangaya, The Key To Home, has officially launched on the Fakku! Storefront for $9.99.

The Key To Home is an all-ages VN, so you won’t be hit with any lewd imagery or sexually explicit content. The story centers around Hiroshi Kuroyanagi, a teacher who ends up getting blackmailed by a Machiavellian student in order to rob the school of its fortune that is supposedly worth tens of millions.

You can get a glimpse at the art and characters with the teaser trailer below from Henteko Doujin.

The Key To Home’s tumultuous journey through the perilous circle of censorship started way back in late 2017, when the Religious Right censorship group NCOSE had managed to incite the original Waifu Holocaust on Steam and the game was caught up in a wave of bans taking place on Valve’s platform.

A poorly worded description of the game coupled with the imagery of the girls led to a knee-jerk reaction from the reviewers at Valve, resulting in them saying that the game was aimed at “pedophiles“.

Later on in 2018 after Valve instituted the adult filters, much to the chagrin of NCOSE, Henteko Doujin tried re-releasing the game on Steam once more, but to no avail.

The second time they tried to release the visual novel they were met with more blockades from Valve. Shortly thereafter, an artist at Valve who joined the company during the acquisition of Campo Santo looked into the bans and reported that the staff who banned the game said that it was “legally grey”, even though The Key To Home had received a ‘T’ for Teen rating. 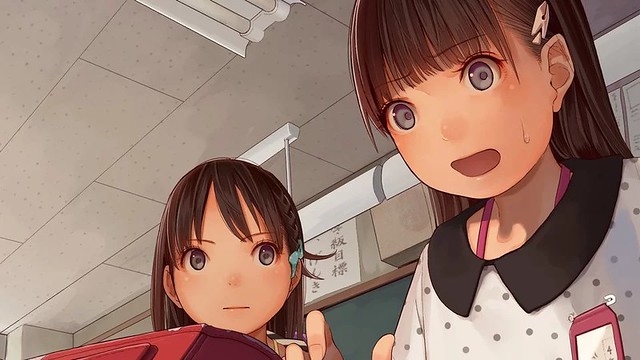 The Key To Home along with a few other visual novels were banned from Steam by product release manager Jason Ruymen and business development associate Arisa Sudangnoi, which led some people to label them as the “rogue employees”. However, it was later discovered that certain reviewers at Valve simply didn’t like certain kinds of visual novels, even when they had no sexual content nor any nudity. We’ve seen a number of all-ages visual novels getting banned from Steam, including My Girlfriend, which was set in college, and Victory Project, which was a political sci-fi thriller.

Anyway, a lot of fans of visual novels were hoping that other digital storefronts would step in to pick up these titles and offer them up for sale. Well, it looks like Fakku!, has stepped up to the plate and has listened to the feedback from the VN community.

If you want to pick up a digital copy of The Key To Home you can do so right now by visiting the Fakku! Store page, where it’s currently available for $9.99.

(Thanks for the news tip Fakku!)