Jordan Peele’s revival of the Twilight Zone isn’t the one you grew up with back in the day. It’s not about thought-provoking political or social commentary wrapped around clever or dangerous ideas. Well that definitely wasn’t the case with the seventh episode of Twilight Zone titled “Not All Men” that aired on May 8th, 2019 on the CBS streaming service.

There are some obvious spoilers ahead, but the gist of the episode is that a meteor shower hits a small town, including its water supply. The men begin acting strange, more volatile, aggressive and violent. At first it seems like the message is that the meteors are making the men “toxic”, but at the end of the episode we find out that the meteors had no effect on the men’s behavior, because a gay male is not acting “toxic” because he chooses not to.

The message was basically that the men were just acting toxic because that’s how most men are.

YouTuber The Amazing Lucas just went on and called a spade a spade, saying that the episode “Not All Men” was “WOKE”, and his audience was in full agreement with him.

“Progressive” Liberals on YouTube were also keen on praising the episode, including GameSpot Universe, who claimed it was one of their favorite episodes. Just looking at the reviewers you can obviously see why, since .

But what’s funny is that their audience wasn’t entirely on board with the whole “toxic masculinity is ruining society” spiel.

The like/dislike bar outlined that a lot of people were not in agreement with the millennial reviewers.

The comment section had some people calling out the show for its absurdity and the message that men are basically naturally toxic.

On less Liberal-themed channels the comments, the comments became even more negative. On BrainPilot’s more apolitical approach to the episode, the commenters were not at all keen on holding back their disgust for the episode. 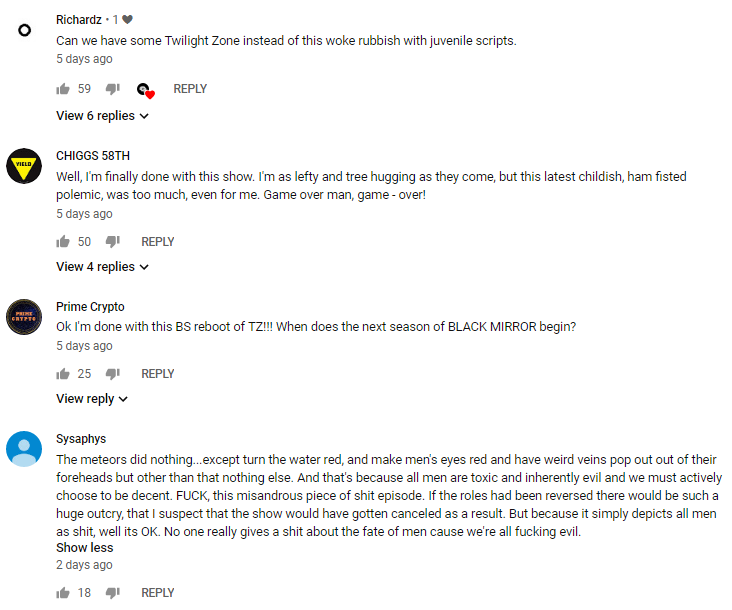 Even more tame channels like Mild Fuzz TV, which tries to cut things down the middle and avoid the controversy associated with the Culture War couldn’t help but become roped into the discussion about the episode as if it were clearly trying to push the Social Justice Warrior agenda down the throats of its viewers.

The hosts reluctantly agree that they did not like the episode for the obvious reasons already listed, basically revealing that even the normies in the Culture War are having their blue pills forcibly taken out of their mouths and crushed right in front of their eyes in the unflinching iron palm of the Intersectional Inquisition.

This is basically more of the same kind of Regressive Left messaging that we’ve seen from those desperately trying to subvert cultural norms in the West. Heck, as is typical with today’s Regressive Left-dominated media, they were praising the episode for exposing “toxic masculinity” in today’s society.

Let’s be perfectly clear here: “Toxic masculinity” is a made-up boogeyman term used to censure men for being men.

This Twilight Zone episode is just one of many that proselytize the SJW agenda, only this time the message was one of being woke and promoting misandry.

(Thanks for the news tip Katsuragi)