Microsoft updated the code of conduct for using Xbox Live with a new Community Standards Page over on the official Xbox website. The updated page went live on May 1st, 2019, outlining the encouragement of safe “trash talk” and discouraging “problematic” content and behavior.

The outlines consist of topics such as:
1. Keep it Legal
2. Do Your Part To Keep Everyone Safe
3. Turn That Spam Into Substance
4. Keep Your Content Clean
5. Fraud Benefits No One
6. Where There Are Limits, There’s A Reason
7. Harmful Behavior Has No Place On Xbox
8. Respect The Rights Of Others
9. Always Respect The Privacy of Others
10. Be A Force For Good, Even When Others Aren’t

If some of those sound reasonable and others sound like “sensitivity training” ushered in by Social Justice Warriors, then you hit the nail on the head. For example, there’s a section telling gamers to be “welcoming and inclusive”. This is not a joke.

“Harassment and hate take many forms, but none have a home on Xbox. To make Xbox Live a place where everyone can hang out, and to prevent people from feeling uncomfortable or unwelcome, we all need to be stewards. This means more than just not harassing other players—it means embracing them. It means saving those unsavory jokes for people you know will enjoy them. It means taking particular care for others while you play, keeping in mind how they might interpret your content.”

They list a number of things you cannot do, which includes:

That’s correct, if you post something that “offends” many other people, you could be facing penalties. Markus “Notch” Persson was on the receiving end of this kind of sanction when Microsoft excluded him from the Minecraft 10th Anniversary celebration because of his anti-SJW opinions, even though he created the game.

They encourage competitive, safe trash talk, and discourage “hate”. They say that “lighthearted banter” is okay, but no negative behavior that’s “personalized” or “disruptive” that might make someone feel “unwelcome” or “unsafe”.

Literally the entire document is filled with SJW-themed buzzwords. It would take a dense retard not to see it. 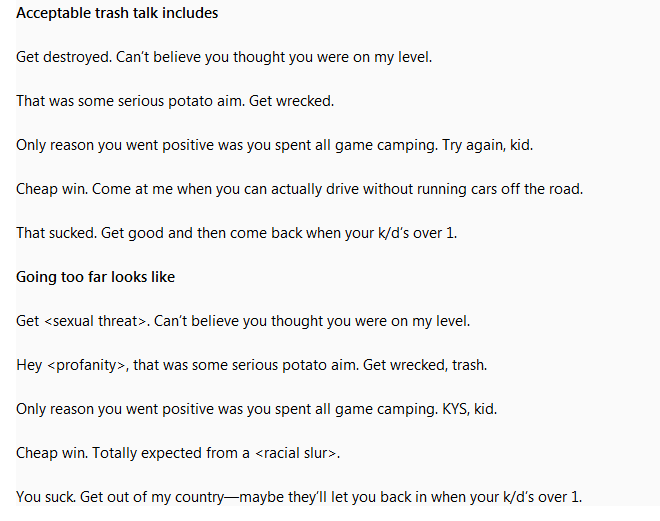 Yes, that’s right… you can’t say “get raped, kid!” because it’s no longer allowed… even in ‘M’ rated games.

Profanity? Nuh uh. Not on Xbox Live. If you use profane words and get reported, you will be suspended.

Basically, everyone has to have safe for work interactions on an ‘E’ rated level even in ‘M’ rated games.

This has been a slowly enforced measure that has encroached AAA games for some time now. Ubisoft has been punishing players for using the same kind of language that the in-game characters use. Yes, you can be suspended or banned from Rainbow Six: Siege for using strong language or slurs, even though the game is rated ‘M’ for Mature… for strong language.

But it’s not just language and images that Microsoft doesn’t want on Xbox Live. If you make “edgy” comments or behave in an “edgy” way, they don’t want you on Xbox Live. They plainly state…

“Xbox Live is your gaming network, but it’s everyone else’s too. We encourage showing off what makes you unique and awesome, but it’s not cool to post something that keeps others from having positive experiences. We aspire to a community where gaming can be enjoyed by all. Problematic content just gets in the way. If you’re looking for a place on the internet to be overly edgy or get that rise out of people, Xbox isn’t the place for you”

It makes sense to limit trolling, and prevent people from inciting real-life violence, doxing, or actual harm, but if you look at what they consider “edgy”, you can see that this has nothing to do with chan-culture edginess. 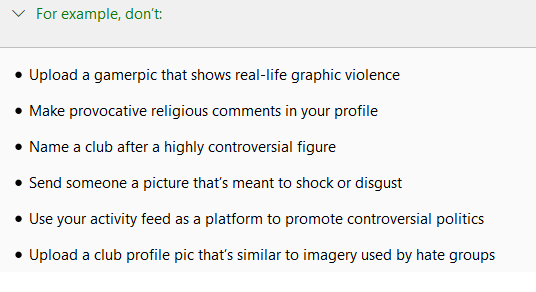 That’s right… “provocative religious comments” are prohibited along with names based on a “controversial figure”.

This puts into perspective the recent ban an Xbox Live user received for a gamertag called “IwillRedPillU”. He was forced to change the name, to which he tried changing it to “Jesus Is Lord”. Microsoft responded with a temporary suspension stating that the name was “inappropriate”.

So Christianity and Christian names are now considered “highly controversial”.

Other prohibited content is the sort of stuff that’s been prohibited for a while now, such as not uploading pornographic or nude images, or sending unsolicited lewd or sexual messages to other players.

There are also other standard rules, such as not selling Xbox Live accounts, or selling gamertags, or trying to defraud the refunds or software policy systems, or pretend to be an employee at Microsoft or for the Xbox Live services. Those have been in place since the inception of Xbox Live.

There are also other in-game content restrictions that seem to veer a little far off the beaten path, especially by prohibiting users from circumventing in-game economies or making use of glitches or game bugs to gain extra monetary means for your character. 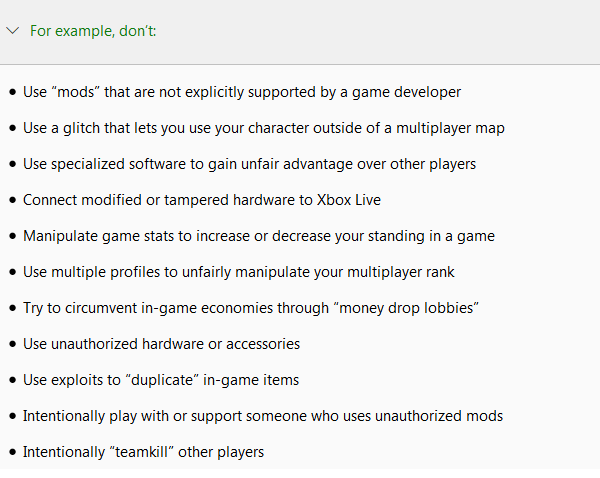 Everything on that list basically means that you can no longer make use of any of the many exploits present in Bethesda’s games such as The Elder Scrolls or Fallout. However, there is a caveat and it’s that they do mention that this is in relation to Xbox Live, writing…

“Since competition is best when it’s fair, a level playing field is one of the most important requirements for gaming. When people cheat, use exploits, or otherwise tamper with hardware or software to gain a competitive advantage, it ruins the experience for everyone. Because of this, cheating, tampering, and the use of exploits is never acceptable on Xbox Live. Like, never.”

But shouldn’t that be up to the game’s developers to police and not Microsoft? If there’s a level glitch that allows you to make a ton of cash in-game, why are players being punished for the developer’s mistake?

Obviously, if someone mods their game and goes around cheating online, then drop the ban-hammers like Augusto Pinochet dropped bad habits from helicopters. Otherwise, the interactions that players take in the game that may or may not be exploitable based on the competency of the developer should stay strictly between the player and the developer.

This is one thing that Valve is usually good at doing; they keep out of most drama involving cheats and exploits unless third-party software is involved, at which point they will VAC ban a user.

Now unlike Sony, Microsoft’s penalties are a lot more lenient. They will restrict your account based on the actions you’ve taken, which means that if you broke a rule relating to sending text or voice messages you’ll be restricted from using the voice or text messaging services. If you engage in inappropriate conduct such as sending game clips or screenshots containing violating material, you could be blocked from using such features.

However, repeat offenders who receive a permanent account suspension will lose access to their games, as laid out at the bottom of the page, where it states…

“We may permanently suspend a profile or device if we can no longer trust it due to a severe violation, or if our attempts to correct repeated negative behaviors are unsuccessful. Under permanent suspension, the owner of the suspended profile forfeits all licenses for games and other content, Gold membership time, and Microsoft account balances.”

None of this is beneficial to the actual end-user, though. What this means is basically that as we move toward the all-digital future, people have to abide by the rules established by authoritarians who adopt the Regressive Left’s policies on interaction and online behavior, and if you violate those standards too often then you will lose access to your account and your games.

(Thanks for the news tip Zach Z)