[Update:] Anime News Network CEO Christophe Macdonald posted a tweet in reply to YouTuber Hero Hei on the evening of June 1st, 2019 indicating that he was wrong about the way the copyright system worked on YouTube and opted to delete his previous tweet on the official Anime News Network Twitter account.

Fake News!
– YT reinstated my vid in accordance with DMCA.
– I deleted my vid after it was reinstated so you would not try and possibly abuse the DMCA again.
– You just gave me the date the strike was issued on, info I greatly needed. Matches the date of your CEOs tweet. Thanks! pic.twitter.com/ydlMdCbN5S

@_Hero_Hei_ I made a mistake and I admit it. I stand by our claim that the video was infringing, but I was completely wrong about the outcome of the dispute. I just saw the notification from YouTube, they sided with you in regards to our DMCA complaint. I deleted @anime tweets.

[Original article:] Anime News Network filed a false copyright strike against YouTuber Hero Hei back in late April, preventing him from livestreaming while the strike was active. Minnesota lawyer Nick Rekieta managed to get involved and help Hero Hei out by filing an appeal on his behalf so the YouTuber wouldn’t have to dox himself to fight the strike. They eventually managed to beat back Anime News Network at the expense of losing the video, however Hero Hei was able to livestream again and no longer had the strike on his channel. Indignant at this turn of event, Anime News Network took to Twitter to spite Hei while he basked in the victory of getting the strike removed from his account.

Just after the strike of midnight, the Twitter handler for Anime News Network logged into the account, angry, spiteful, and filled with the burning rage of a scorned schemer. On June 1st, 2019 they posted the following rebuttal to Hero Hei’s victory lap on Twitter.

If by “won the dispute” you mean “gave up and deleted the infringing video.” Sure. Whatever. We dare you to upload it again in the exact same format. pic.twitter.com/Yymfh8H1EX 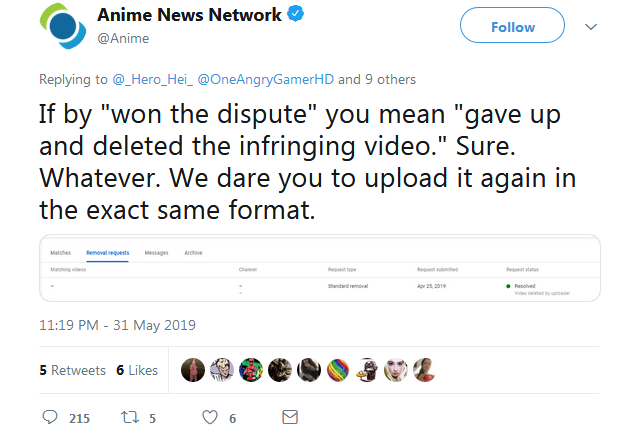 The first half of the tweet almost reads like they scoffed at Hei coming out of the dispute with his YouTube channel intact, mocking the idea that the video they flagged under false pretenses was deleted.

The second half of the tweet is the one that really steps up the socially parlous intent of the news network, as they appear to be goading Hero Hei into re-uploading the video with the intent of threatening to copyright strike his channel again.

YouTuber ClownfishTV actually called them out on their not-so-veiled threat.

Why is “the internet’s most trusted anime news source” using their company Twitter to publicly THREATEN a YouTuber…?

ClownfishTV has actually had contentious run-ins with Anime News Network in the past… not from their own doing, though. The YouTube outlet has been regularly covering the Vic Mignogna situation, which gained much of its notoriety due to Anime News Network’s flagrantly charged coverage that painted the anime voice actor in an extremely negative light, which helped contribute to a public castigation. This eventually resulted in Funimation and Rooster Teeth firing Mignogna based on spurious allegations, which eventually resulted in Mignogna suing Funimation and the instigators of the #KickVic movement who tried getting him blacklisted from the anime industry based on #MeToo-fueled allegations, some of which turned out to be fabricated.

The company even doubled down on those claims, basically labeling anyone who didn’t fall in line with their ideological agenda “Alt-Right” or “Nazis”.

The SJW-leaning news outlet didn’t have their threat against Hero Hei go unchallenged, though. The tweet was absolutely pelted with memes and criticisms of the outlet being saltier than a Utah salt mine.

Go to bed, ANN. You’re drunk with too much soy.

The comparison of Anime News Network to CNN seems somewhat fitting, especially after it turned out that the Russian-Trump hoax managed to gain mainstream attention due to CNN’s incessant coverage of the topic, which turned out to be literal fake news, as revealed in the Mueller report, according to NPR.

There are a lot of similarities between the Russian-Trump hoax and the Vic Mignogna #MeToo scandal.

Anyway, for those of you out there who are still unsure about the integrity of Anime News Network, it makes it hard to deny their intentions at this point. Then again one would think that their political agitprop would have been pretty clear after the whole Rising of the Shield Hero incident, or when they banned people from using the word “trap” in the forums, or when they banned users from using “SJW”, or when they attempted to omit information about the radical feminist group Megalia to cover for them.