Ars Technica journalist Peter “Dr. Pizza” Bright was arrested and charged with attempted enticement of a minor in illegal sexual activity, according to a report published on June 7th, 2019 by the Daily Dot. This means Bright joins a host of other anti-#GamerGate journalists and activists on the SJW sexual misconduct master list.

Bright, known via his Twitter handle Dr. Pizza, was accosted by the FBI after arranging to meet and engage in sexual activity with minors. In the PDF report of the deposition from Undercover FBI agent Elizabeth Jensen, she explained…

“From on or about April 18, 2019 up to and including on or about May 22, 2019, in the Southern District ot’ New York and elsewhere, PETER BRIGHT, the defendant, willfully and knowingly, did use a facility and means of interstate and foreign commerce to persuade, induce, entice, and coerce an individual who had not attained the age of 18 years to engage in sexual activity for which a person can be charged with a criminal offense, and attempted to do the same, to wit, BRIGHT used computers and/or telephones to communicate with an undercover FBI agent about arranging to engage in sexual activity with a purported nine-year old boy and a seven-year old girl, and attempted to meet with the boy and the girl to engage in sexual activity, in violation of New York Penal Law Sections 130.25(2), 130.30(1), 130.35(3), 130.55, 130.60(2), and 130.65(3) and (4j).”

The statements were backed up by chatlogs captured from Jensen, who was posing as a mother of a seven-year-old girl and a nine-year-old boy.

In the chatlogs Bright reveals that he has an 11-year-old girl he’s been “teaching” in the Bronx, saying…

“I have a girl I’ve been teaching off and on for a couple of months now. But she’s in the Bronx, which makes the logistics much harder. As old as my princess? […]

The FBI are reportedly investigating the situation involving the 11-year-old in the Bronx, as the Daily Dot notes that Bright could be facing more serious charges, such as rape of a minor.

When the Daily Dot contacted the parent company of Ars Technica about Bright’s arrest, they proceeded to fire him.

Bright, however, has a long history of being anti-#GamerGate, and using his blue checkmark account on Twitter to rag on #GamerGate and accuse people of being pedophiles. This is despite the fact that in his Twitter profile he defines himself as poly/pan/pervy, and was a staunch supporter of feminism. 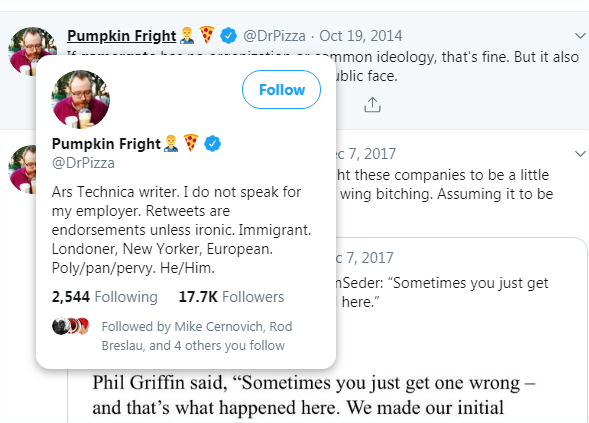 There is an archive of tweets between 2014 and 2017 of Bright accusing #GamerGate of being an elaborate harassment campaign where gamers contacted the FTC to improve disclosures of endorsements, and had advertising pulled from unethical outlets like Gawker, Vox, and The Verge, in an attempt to attack women.

there is no good faith interpretation of gamergate, because no part of it was ever in good faith. it wasn’t a legitimate complaint coopted by bad guys; it was bad guys trying to give themselves a paper thin cover.

All of this is false.

There is literally a repository of ethical violations chronicled over on DeepFreeze.it.

The site catalogs all of the known infractions from major gaming media outlets. That’s not to mention that the FBI report indicated that they could find not actionable evidence remotely indicating that #GamerGate was ever a harassment campaign.

And #GamerGate had multiple campaigns to overhaul ethics policies at The Verge, Kotaku, IGN, and even YouTube, but Peter “Dr. Pizza” Bright said it was still about “harassment”.

No; it was harassment. 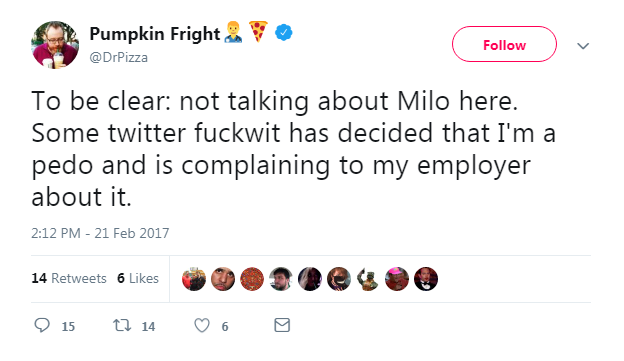 Back in November of 2017 Bright tried painting Sean Hannity from Fox News as a “pedo enabler” while debating with Stardock CEO, Brad Wardell.

During the conversation, Bright jumps to claiming that Hannity was a “pedo-enabler”.

I don’t call him a pedo-enabler because I disagree with him. I call him that because of his decision to defend Roy Moore, and downplay the most serious allegations against him.

Bright had a number of tweets accusing ‘Q’ anon and Trump supporters of following someone who was in support of pedophiles.

So for the benefit of Q anon idiots;

Acosta shielded pedo Epstein, making sure he got off leniently.

Trump appoints Acosta, doesn’t care about his pedo-protecting past.

Yet this is the man you think is going to round up thousands of pedos? He’s on their side! https://t.co/C8irIeIWsq

HEY YOU Q MOTHER FUCKERS, ARE YOU GETTING THIS? YOUR HERO IS OBJECTIVELY PRO PEDO. https://t.co/NjV5rg2P3U

Bright also took digs at anime fans, claiming that “anime is for pedos”.

anime is for pedos

The biggest irony of all was Bright’s condemnation of #PizzaGate from back in 2016, which the media and platforms worked furiously to suppress, misrepresent and upend in any way that they could.

In February of 2017 Bright made a series of tweets mocking and objecting to #PizzaGate. On February 12th, 2019 he ridiculed anyone who thoguht #PizzaGate was real.

Apparently idiots still think that pizzagate is a thing https://t.co/L23VNwtCMf

On February 13th, 2017 he made a mocking tweet comparing #PizzaGate with flat-Earth theorists.

flat earthers versus pizzagate: whoever loses, we all win

And again on February 13th, 2017 he continued to call #PizzaGate a fabricated issue.

what about stuff like pizzagate? Fabricated issue driven by perverse reading of real email. Fake, or just wrong?

A day later on February 14th, 2019 Bright was back at it again, mocking #PizzaGate.

And on February 21st, 2017 he once again inferred that #PizzaGate was fake.

“do you think pizzagate is fake” uhhhh… yes…? Like, obviously? These fucking people.

He does this all while there’s a pizza icon in his profile and his handle is “Dr Pizza”.

Now to put this into context, the original allegations surrounding #PizzaGate was that there was coded language and odd phraseology in the John Podesta e-mail leak. It was alleged that the food references were code words used by pedophiles to talk about their victims. The coded language was never thoroughly proven, but in our examination of the e-mails there was one letter that outright stated that people would be bringing their kids to a pool party in October for Podesta’s “entertainment”. This was neither coded nor hidden, and the e-mail is still available to read on the Wikileaks website.

For those uninterested in reading the e-mails, the relevant message from Tamera Luzzatto, the senior vice president of government relations at the Pew Charitable Trusts Organization, reads…

““With enormous gratitude to Advance Man Extraordinaire Haber, I am popping up again to share our excitement about the Reprise of Our Gang’s visit to the farm in Lovettsville. And I thought I’d share a couple more notes: We plan to heat the pool, so a swim is a possibility. Bonnie will be Uber Service to transport Ruby, Emerson, and Maeve Luzzatto (11, 9, and almost 7) so you’ll have some further entertainment, and they will be in that pool for sure. And with the forecast showing prospects of some sun, and a cooler temp of lower 60s, I suggest you bring sweaters of whatever attire will enable us to use our outdoor table with a pergola overhead so we dine al fresco (and ideally not al-CHILLo).”

In any case, the citizen investigators looking into #PizzaGate called for an investigation into Podesta and those linked to him, but the media swiftly changed the narrative into a story about dungeons in pizza parlors and then swiftly passed it off as a “fake hoax”, resulting in the Wikipedia entry purposefully leaving out key details in order to misrepresent and obfuscate the topic matter.

In this case, however, Bright not only was linked to the Game Journo Pros, which was created by his Ars Technica cohort Kyle Orland, but Bright defended corruption, attacked #GamerGate, wildly accused others of being pedos, and then mocked #PizzaGate, all while in his own personal life he was allegedly involved in preying on children, according to the FBI.

The funny thing about is that Bright being arrested and charged has reignited the #PizzaGate hashtag. Funnily enough, Bright joins others such as former Forbes journalist Matt Hickey, and former NeoGaf moderator Christopher Goldberg, in being another anti-#GamerGate activist who was busted for doing the very things for which they accused others.

This also reminds me of an old phrase from the GameJournoPros group, about #GamerGate not being over with until people start going to prison.

(Thanks for the news tips Lyle and anon)