Welcome to the 21st century sh!t show! If you thought a company couldn’t possibly do something controversial after witnessing another company get caught in a debacle, there’s always someone who comes out and says “hold my beer.” In this case, we have Deep Silver and Ys Net’s Shenmue 3 caught in the crosshairs of controversy after it was announced that it’s now an Epic Games Store exclusive, ticking off backers and longtime fans alike.

Way back in April, we predicted that the chance of Shenmue 3 becoming an Epic Games Store exclusive was high, and lo and behold it has come to fruition as of June 10th, 2019 — during the PC Gaming E3 2019 show.

With that said, here’s an excerpt of our prediction made two months ago:

“Shenmue 3 is set to release for PC via Steam and PS4 on August 27th, 2019 [before the third delay of course]. However, given Deep Silver past act with Metro: Exodus don’t be shocked if an Epic Games Store timed exclusivity deal pops up sometime soon.”

As of today, here’s the controversial announcement made by Ys Net that is accompanied by the Japanese and Western E3 2019 trailers:

“Development for Shenmue III has been moving forward using Unreal Engine and the support we have received from Epic has been excellent. But most importantly, in looking for the most enjoyable experience on PC, it was decided together with Deep Silver after much discussion that the Epic Games Store would be the best distribution platform option.”

To no one’s surprise, backlash bubbled up in the comment section for Shenmue 3′s Kickstarter page where backers pointed out the bait and switch tactic that broke the promise of a Steam version:

Well, With all of that said, the Kickstarter announcement page detailing the storefront switch has over 500 comments in less than three hours, which means Deep Silver and Ys Net know how to find themselves in deep trouble with fans. There are a lot of comments now requesting refunds. 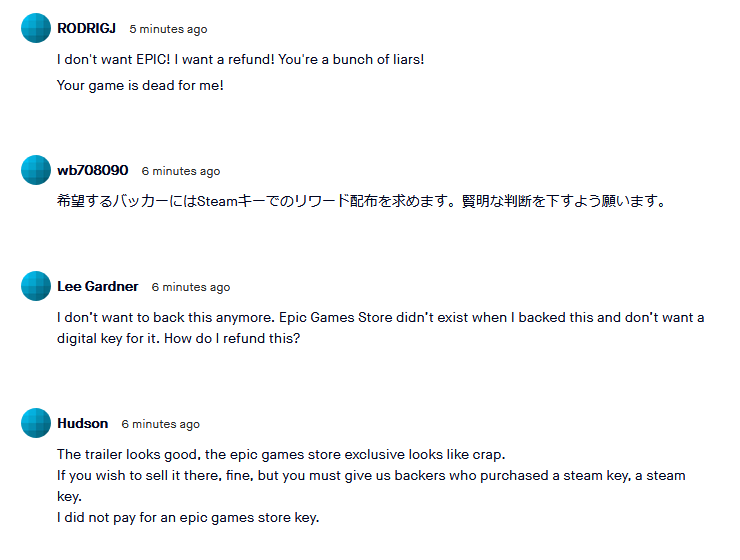 As noted above, this move isn’t too shocking given Deep Silver’s past track record with Metro: Exodus hence our prediction two months ago. Anyway, the game in question is slated to debut for PC via the Epic Games Store and PS4 on November 19th, 2019.