Other sites haven’t been so lucky, though, and you’ll see a Digital Millennium Copyright Act notice at the bottom of the search page if you attempt to search up their homepage.

As reported by TorrentFreak, imageboard Gelbooru got hit by the notice and haven’t had any luck having their homepage restored to Google, with TorrentFreak explaining…

“The operator of one site – Gelbooru.com – which had its homepage delisted from Google despite containing no infringing content, told TorrentFreak that complaining to Google proved fruitless.”

There are multiple lists of the sites that have been hit. If you want to see an easy-to-read listing of the allegedly infringed content that was removed and the sites that had their homepages nuked, user Slayerduck linked to a Pastebin for all the affected parties.

Now there are multiple entries of various alleged copyright infringements. Some people originally thought that DLSite.com had something to do with it or their parent company EISYS.inc., since some of the claims listed DLSite as the one who owned some of the original works being infringed upon. However, in an update on the article TorrentFreak linked to the Lumen Database entry where not only list the original works being from DLSite but they also had DLSite listed as one of the sites infringing on the content! 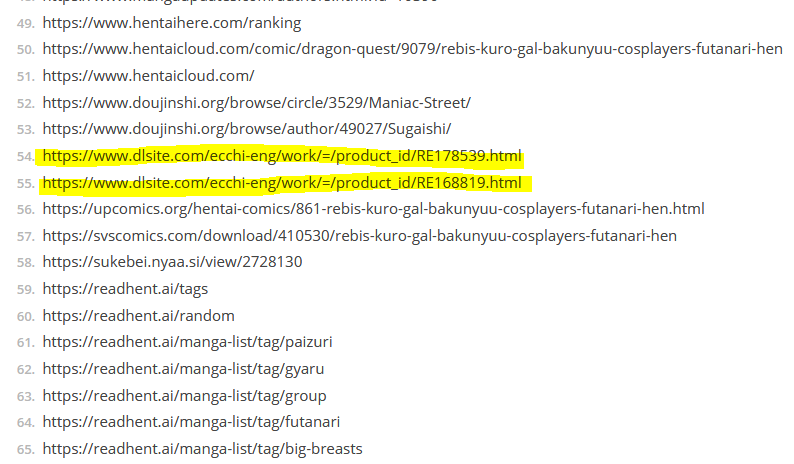 Even still, losing visibility of any page on a search engine is a huge blow to a website, because it means when people search up that content it won’t appear in Google.

This isn’t to say that the sites that had some of the claims filed against them aren’t infringing on the content. It’s very possible that some of them are, but at the same time the DMCA is also affecting other sites that aren’t involved. Then again, it could be that some user uploaded content may have contained copyrighted material and the copyright holders decided to file a claim based on that material.

Again, it’s tough to tell given that there isn’t any data on the sender if you visit the different notices on the Lumen Database.

TorrentFreak has links to various entry claims targeting hundreds of links across various websites where the claimant has alleged that these sites have infringed upon their content.

I did reach out to DLSite for comment, and they responded explaining that they did not issue the DMCA claims. A representative for DLSite and EISYS stated…

“We had a look through the article you provided and can tell you that EISYS, Inc. / DLsite is not involved in this matter. When we send a DMCA request it will be via:”Eisys, Inc.” https://www.eisys.co.jp/company/company-overview.html or “Unidam, Inc.” http://www.unidam.com/company

“We do not know anything about the company: “Copyright Legal Services INC”

“With that being said however, it is indeed strange that the same URLs would appear in both… […]

“We can only assume that it is a mistake of some description or that someone is trying to use our name such that they may avoid tarnishing their own reputation.

“As far as DMCA requests go, the DMCA sender must be the owner of the copyright material, or have permission from the owner to act on their behalf.

“What this means is… if the takedowns are being performed legally, then it could be a company similar to DLsite which sells the same content and has the rights to perform DMCAs. (Not pointing the finger here or anything, but one example would be DMM.)

“If this is not the case, then the takedowns are being performed illegally. i.e. the company does not have the rights to perform a DMCA takedown.

(For all we know, it may very well be a ‘paper company’ / shell corporation doing dirty work for Japanese creators… and considering the sheer number of takedowns it could be an automated AI of some description but… that’s getting into the field of crazy conspiracy theories.)

(Thanks for the news tip Patrick Wise)