Square Enix had been withholding any visual imagery of Tifa for the upcoming Final Fantasy VII Remake due out on March 3rd, 2020 next year for the PS4. But during their E3 press conference they finally dropped the video bomb featuring the brunette bombshell from the 1997 classic… and she’s not quite the way she originally was.

Fans have been asking about Tifa ever since the Final Fantasy VII Remake was announced. Many longtime gamers feared that Square would butcher the buxom beauty to accommodate the anti-gaming faction who control today’s gaming media outlets. Well, it appears there were some concessions made to her design.

Tifa’s boobs appear to have been shrunk, her skirt is now pleated instead of tight leather, and she has on a black under-shirt. The upside is that whenever she kicks or jumps you can clearly see up her skirt, but it looks like she’s wearing spats or boy shorts to keep from showing off too much underneath.

This has already created arguments about the changes, whether Square was trying to accommodate Sony’s censorship policies or if the changes were actually a kick to the teeth of SJWs since you can see plenty of midriff and get an upskirt shot every time she spreads her legs. She’s obviously less covered than her getup in Final Fantasy VII: Advent Children, but not quite as exposed as she was in the original Final Fantasy VII. You can see her for yourself in action with the latest E3 2019 trailer below.

Fans have been comparing Tifa’s boob sizes to previous incarnations. They note that she looks different than her appearance in Advent Children and how she appeared in Dissidia, but still smaller than her traditional design.

The major problem is that during the trailer we don’t really get to see much of her in the trailer to be able to tell what her proportions are. If you look at the images they usually cut up above her nipple line so you can’t properly see the proportions. 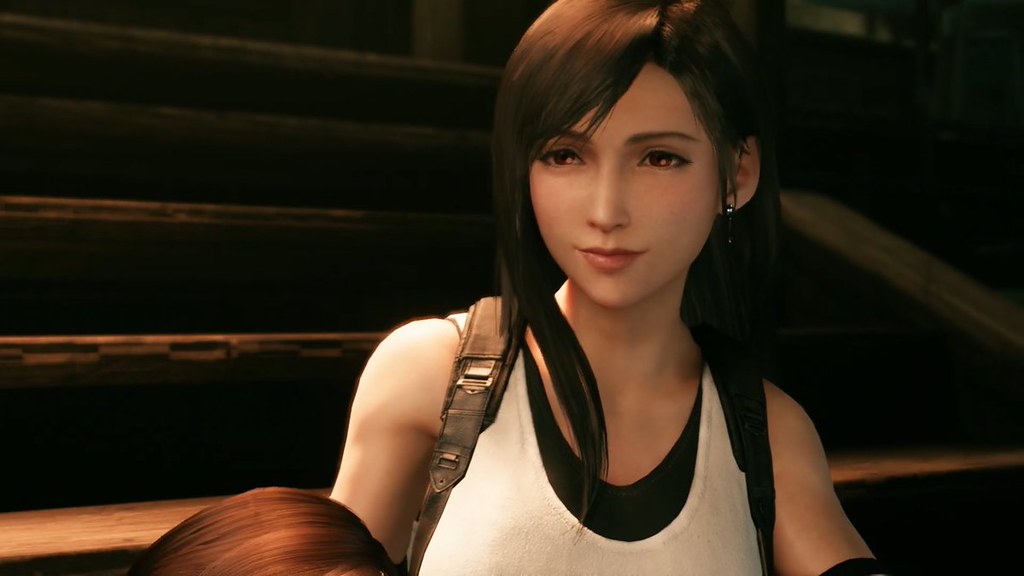 During the segment where we see Tifa uppercutting the monster, we get to see more of her body and finally all of her boobs in a single sequence. The problem is that we only get to see their proportional height and width, but very little depth.

As far as the height size goes, her boobs look about on par to what one might expect, but it doesn’t look like she has the perky depth that she was sporting from the original game. 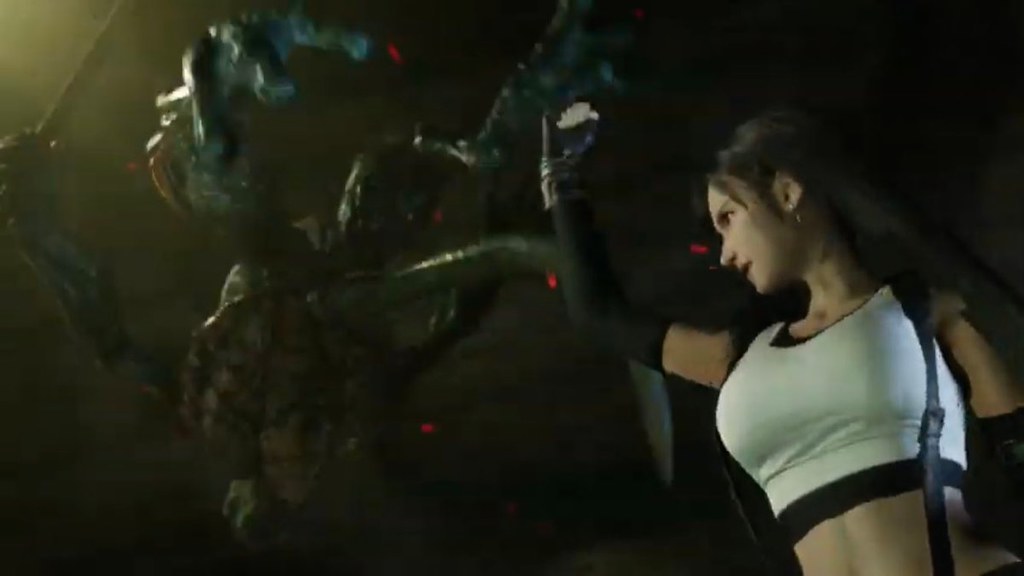 You get a better glimpse of the depth of her boobs in the sequence where she’s at the bar talking to Cloud.

While she’s at the bar so you get to see more of the outline of how far her boobs protrude from her chest, and you can see how they look in the image below. 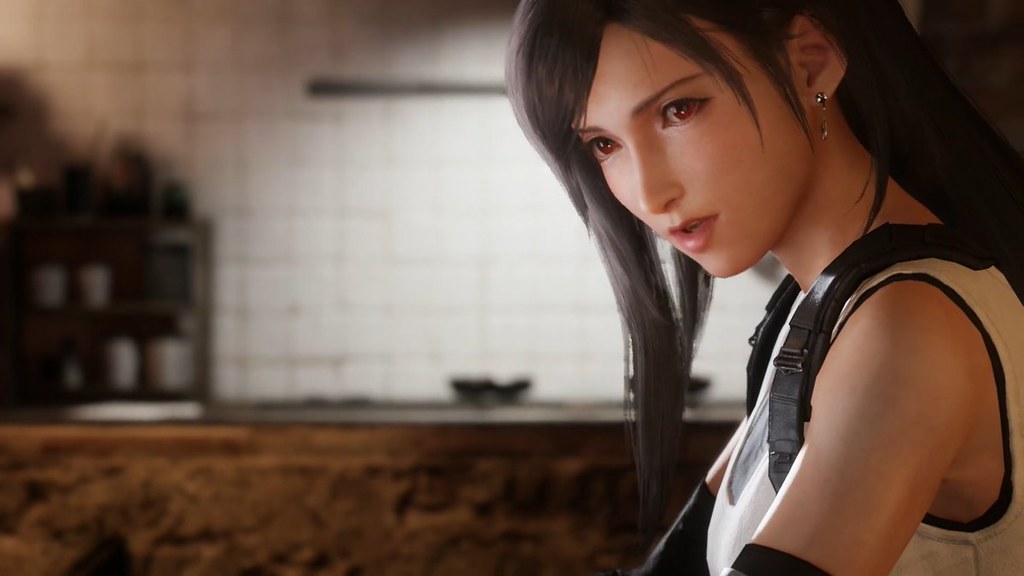 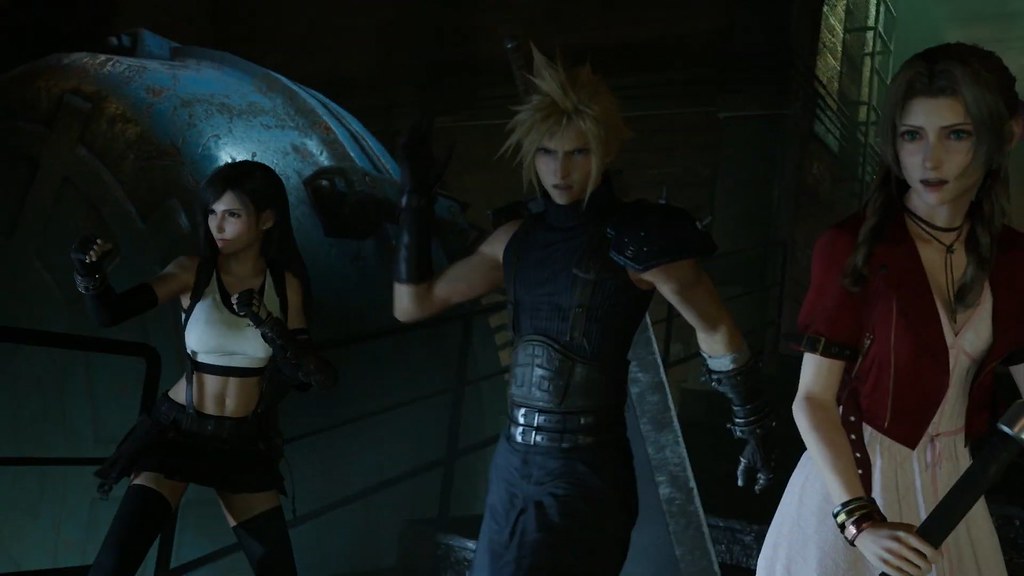 Nevertheless, Tifa’s new design has caused quite a rift with some players.

You can see how she measures up to her Dissidia model in the comparison below.

I imagine some of the ResetEra-types will end up complaining about her upskirt shots and the fact that she has so much skin showing with her midriff bare. But Square still didn’t win over everyone by shrinking her boob size, which didn’t really make a lot of sense given that she’s still not going to win over the propagandists at Left-wing media outlets. At the same time she still doesn’t quite captivate all the normal gamers. It almost feels like a lose-lose situation when try to compromise.

Either way, Final Fantasy VII: Remake is due out for PS4 on March 3rd, 2020 next year. I’m sure if it ever graces Steam on PC there will be mods to fix Tifa properly.