CD Projekt Red community manager Pawel Burza shared an updated version of the Cyprian Whoreson Junior card from Gwent. The updated version features the killer in a basin filled to the brim with blood. An extended pale knee can be seen on the right side of the basin, while the nude killer glowers ominously toward the viewer. It turns out that the card – despite containing Cyprian standing there nude – is quite censored.

KotakuInAction2 spotted the censorship, which was made apparent via a post from Burza on June 26th, 2019, which you can check out below.

The Cutups are a ruthless gang and they don’t fool around!

Order: Damage an enemy unit by 7, then gain Crowns equal to any excess damage dealt.#Novigrad pic.twitter.com/Bnt3Ix60Cw

Those who witnessed the original art began to call out Burza and CD Projekt for the censorship.

User JaganshiXI called a spade a spade by comparing the original artwork with the updated censored version of the image that’s being featured in Gwent.

You can see the comparison below.

nice censorship, glad I know where to not spend my money pic.twitter.com/9atbsUAqzU 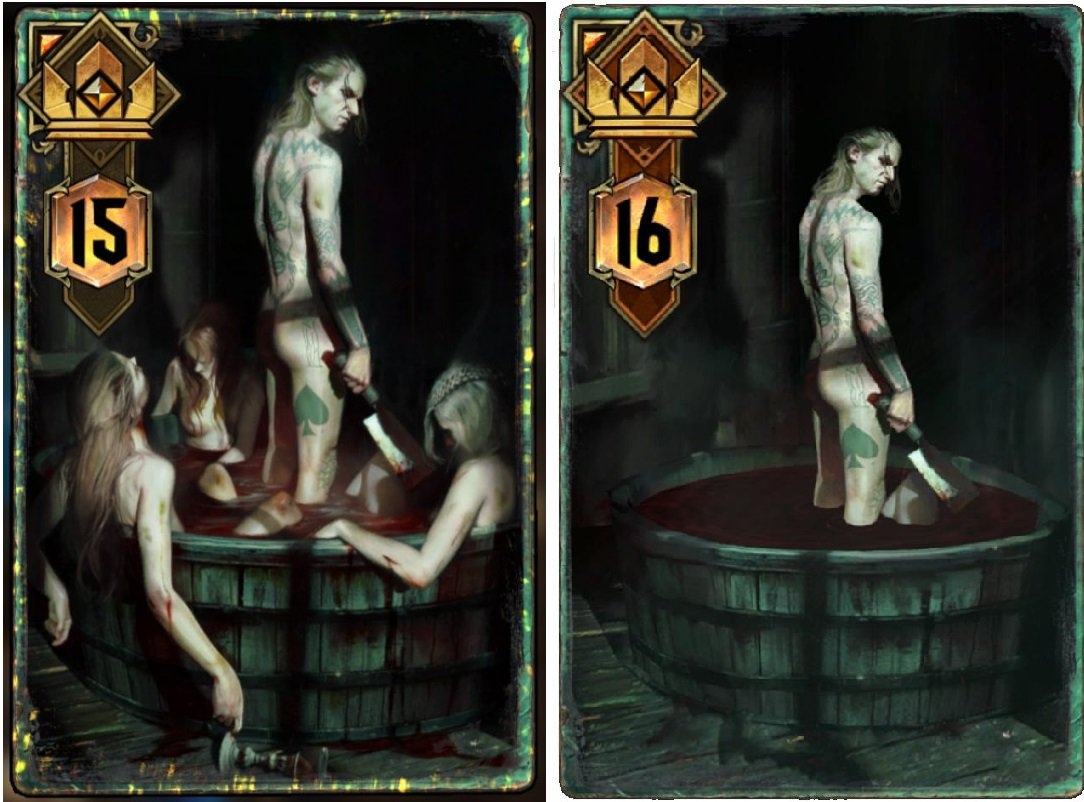 Behind Cyrpian is a red-headed woman, nude, with her bare breasts barely covered by her draping locks. She’s as dead as a diseased dogwood tree.

The third woman – to the far left of Cyprian – reveals their cause of death: A slit to the throat from the cleaver wielded by the ruthless butcher.

Apparently CD Projekt felt the image was too gruesome…? Intense…? Violent…? Or maybe they were trying to protect and respect the fictional women?

Either way, the updated image is about as butchered as the women in the tub from the original art.

In the censored version of the art you can see that the shadow of the silver-haired woman’s head is still visible on her still-present thigh, even though her upper body is no longer there. It shapes roundly on the skin underneath the shadow of the cleaver, creating a weird distortion since she’s no longer present.

The lighting on the blood has also been changed – it no longer reflects the light cast from their bodies onto the ripples of blood, meaning that it looks like Cyprian is copy and pasted into the basin after someone used a cheap Photoshop job to remove the light reflections from the three cadavers.

Most telling, however, are the botched shadows on the censored art. Notice that there’s still the imprint of the shadow from the tipped over goblet, along with the cut-off of the blood from where the silver-haired woman’s arm was lurched over the side of the tub.

The botch job was obvious enough that the people in Burza’s Twitter feed were asking him about it, but Burza tried to avoid answering most them, just until he was pressured to address the censorship, to which he replied  “we’re not going with that version”.

We’re not going with that version.

[Update:] Burza also further explained the decision to remove the card in a Reddit thread, where he stated…

“Since the majority think that my reply wasn’t enough I’ll shed some some more light. We looked at the art of Cyprian Wiley aka ‘Whoreson Junior’ multiple times and weren’t sure about it up till the last minute of release. While we wanted to stick to the lore, we’ve also felt that a bathtub filled with blood and dead bodies was a bit too over the top, especially in a card game with our rating. Yes, I know that it ties to a quest in The Witcher 3: Wild Hunt, but that should not be the sole reason to use the art. Taking all things into consideration we made a last minute decision to alter the art. I believe that in the future we’ll look at this characters art again and if possible will substitute it with sth different.”

Some gamers pointed out that the card was censored via the update just a week after Feminist Frequency criticized The Witcher 3 for the Cryprian sub-plot and the dead prostitutes featured in the game. They talk about the topic of Cryprian and the dead females at the 3:30 mark in the podcast that was published on June 19th, 2019.

It could all be a coincidence and CD Projekt Red decided to censor the card regardless of what Feminist Frequency had to say about the Cyprian sub-plot, but others felt that the proximity of the events didn’t rule out a possibility that one affected the other. But, of course, correlation doesn’t dictate causation, and unless CD Projekt openly explains why they censored, we won’t know for sure.

Simply put, this means that Gwent gamers will be stuck with a censored version of the Whoreson Junior card while playing the CCG.

One can’t help but wonder if this kind of censorship will bleed over into the art direction of Cyberpunk 2077?

(Thanks for the news tip KIA2 and Lyle)