Gaming news aggregator N4G has been a party ground of corruption for some time. Abuse of power, rule inconsistencies, story suppression, and accusations of bias have been part of ongoing discussions surrounding N4G for years. The latest issue centers around what some claim to be agitators from a website looking to suppress submissions in order to keep the competition from gaining ground.

Robin Ek from The Gaming Ground (or TheGG.net) has been collecting a lot of information over the last several months about contributors to N4G from a site called Invision Game Community.

Robin pointed to a couple of examples where his content was repeatedly flagged by users XentaJones and finite, who regularly submit content for the Invision Game Community. If you check their N4G profiles for XentaJones and finite you’ll see that all their submissions are for Invision content.

For instance, back on May 1st, 2019 TheGG submitted a post to N4G informing gamers that Table Top Racing: World Tour – Nitro Edition had launched on the Nintendo Switch. XentaJones reported the submission saying it was a duplicate of a story that was published back on April 10th, 2019 by HandheldPlayers.com. 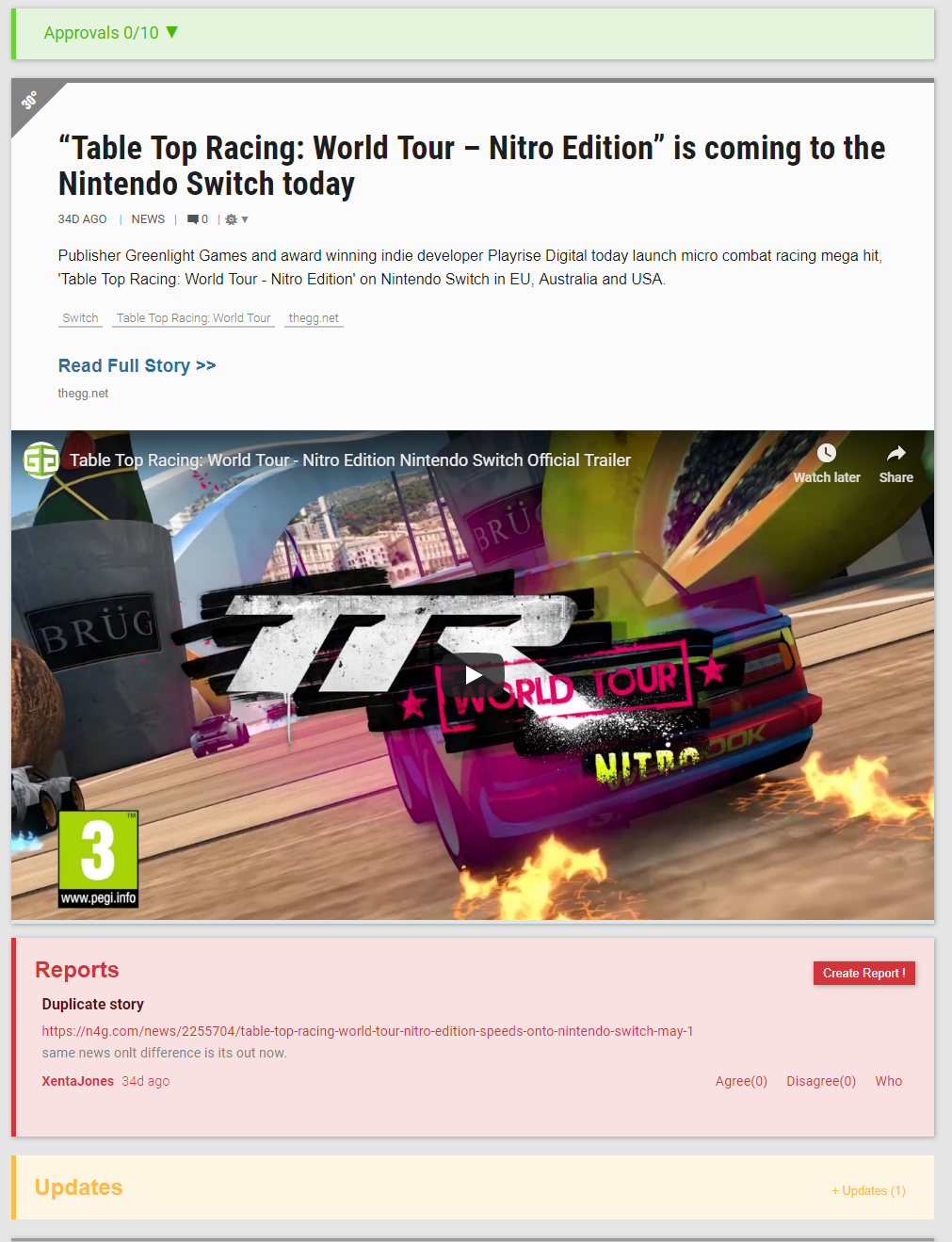 Typically news about a release date and announcing the availability of a game are two different things. However, the N4G moderators upheld the report.

There are other cases of XentaJones attempting to report TheGG’s content but it still makes it through.

However, in one particular case Robin laid a trap with another story, this time covering Team17’s Monster Sanctuary. However the report was removed after Robin called out Xenta via direct message. Xenta retracted the report and the article was approved on N4g. 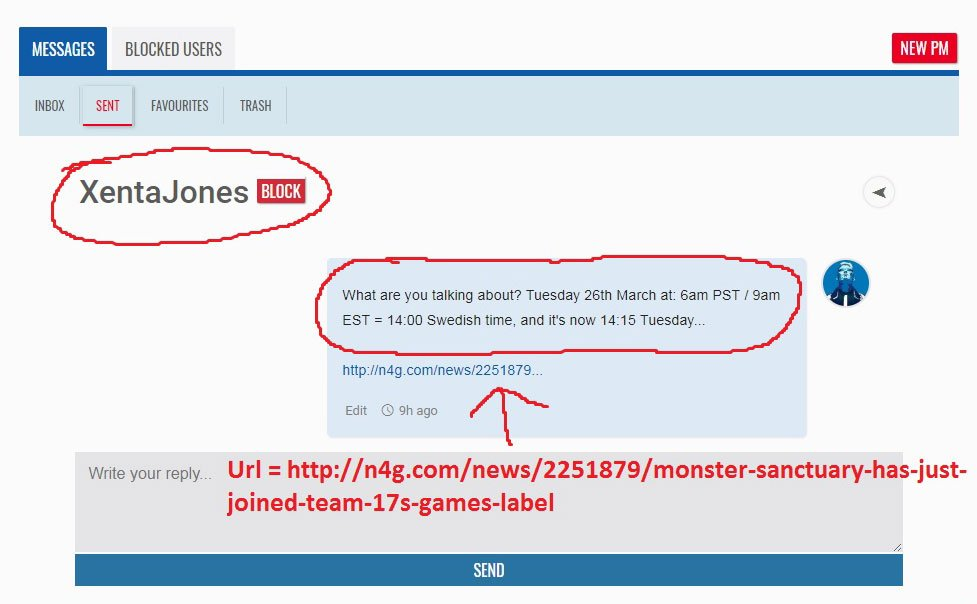 According to Robin, Xenta is only submitting articles from the Invision Game Community while mass-reporting rival sites to suppress their content, saying…

“My point would be that XentaJones is only posting stuff for Invision community all while spamming out reports on rival sites.

“As a matter of fact, I just noticed that N4G has removed the function where you can see how many reports a user has filled out over time.”

N4G removed the ability to see how often and how many reports a user has filed. There’s no way to navigate through the menus to see how many reports someone has filed against a particular website or on what stories. What this does is enables users to file multiple reports against a website to hold up their submissions in the pending section, and unless users begin to mass report the agitators exploiting the system, there’s really no way to stop them from abusing the report system to stifle another website.

Now you can still view reports that you’ve filed from your own account, but you can’t view that data from other user accounts. So if someone is mass-reporting another website for the purpose of suppression, you would have to manually track each submission from that website and check the information page for reports to see if there’s a pattern. Otherwise there’s no other way to easily track user reports for submissions.

Now in the case of TheGG, obviously not all of their stuff has been mass flagged or is getting mass flagged. According to Robin, their content receives undue attention the Invision Community and the moderators. For instance a recent submission about the Effie trailer that was just published on June 4th, 2019 was labeled as “old” by N4G administrator Christopher, despite the fact that the official developers only tweeted out the trailer on June 4th when it was published.

Effie is OUT on @PlayStation!

⚔ Platforming, combats and puzzles await you in this classic fantasy adventure 🛡️ 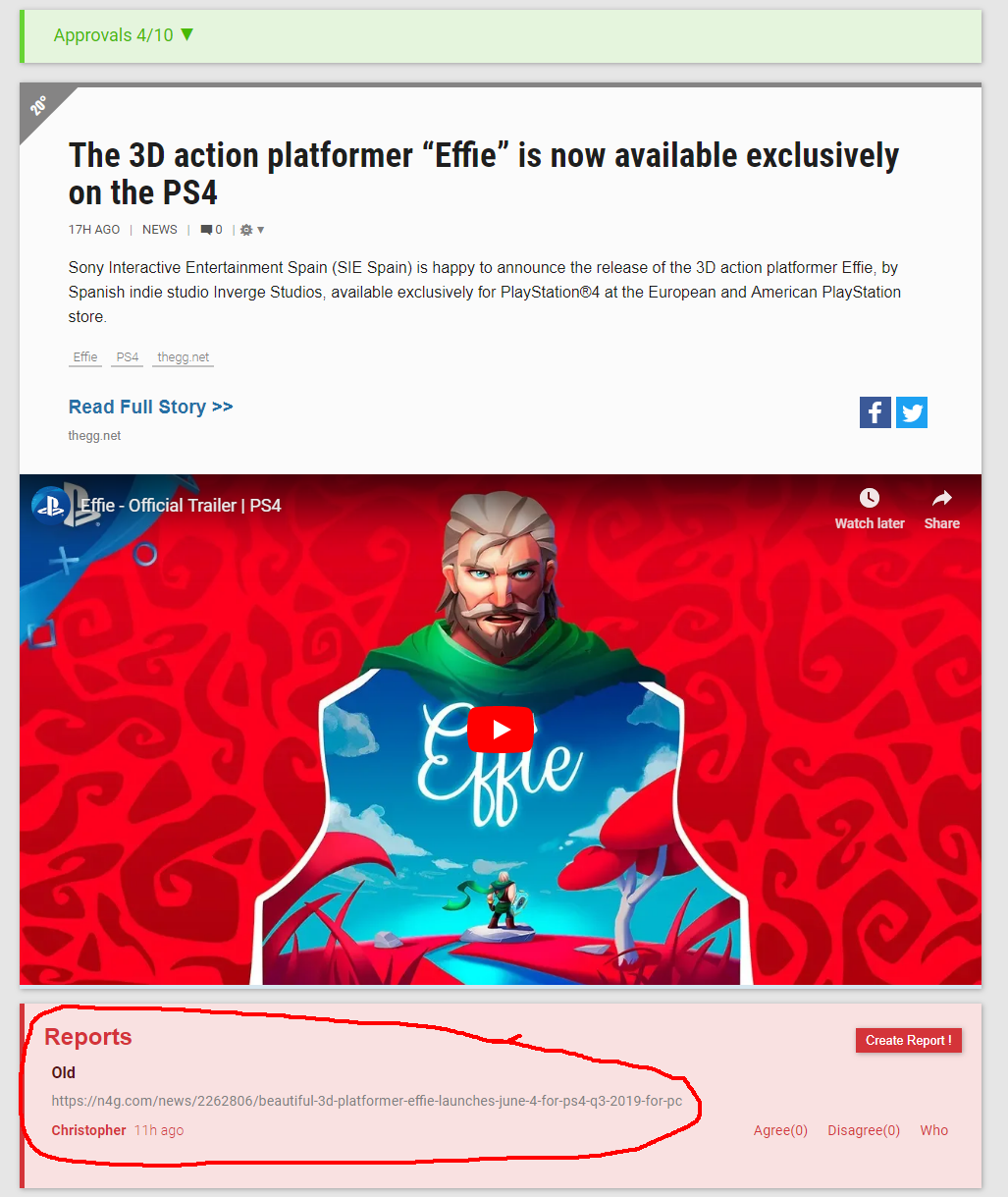 Christopher points to an article from Gematsu that was published and submitted to N4G back on May 9th, 2019, even though it doesn’t contain the recently released launch trailer, which again was only published on June 4th, 2019 as evident with the YouTube upload date.

As noted by Robin, the administrators bend and flex the rules on a whim, using their power to restrict sites from publishing content for any number of inconsistent or made up reasons, saying…

“They bend the rules on the fly as it suits them. And they look for shit just to find a reason to pull your post or suspend you. They pulled our interview with Doug TenNapel for example, because of “reasons”. The community loved the interview, but that wasn’t a good enough reason for the mods.

“The real damn reason is that they don’t want the masses to find out the truth about things. They also pulled our Mark Kern interview, but that one backfired at them, as I took to social media about it.”

This is also true.

There was a huge brouhaha that took place back on December 20th, 2015 leading to a lot of pushback from the community when Christopher banned the interview from N4G due to the line of questioning in the interview he personally didn’t approve of. Eventually Christopher was pressured into reinstating the interview that TheGG conducted with Mark Kern from League For Gamers.

This kind of biased moderation was called out many times in the past, but very little was ever done to curb the issues or address the community concerns.