ResetEra has a secret Discord channel that not everyone is allowed into. A member going by the handle of Celine D. Sykes was one of the few people invited into the channel, where select members from ResetEra hung out, including ZhugeEX, also known as Daniel Ahmed, an analyst from Nikkei; Matt Piscatella from NPD and a ResetEra VIP member; Jawmuncher, a ResetEra moderator, as well as Emily Rogers and LordKano, among many others. After Sykes released some of the chat logs from the Discord channel into the public space, LordKano proceeded to threaten the possibility of a lawsuit.

According to Celine D. Sykes’ multiple posts in a NeoGaf forum thread, some of the users in the Discord channel began discussing topics that she felt veered into unsavory territory. When Sykes approached the ResetEra site owner Cerium about how the conversations in the private Discord didn’t seem to be as heavily moderated as they were on the actual ResetEra forums, the site owner decided to hand wave them away noting that the discussions weren’t that big of a deal. The conversation persisted until Cerium blocked Sykes from Discord and she was banned from the channel.

Sykes was worried that based on what she had seen in the secret Discord channel, there could be more serious unpleasant content involved. She brought her story to NeoGaf on June 14th, 2019.

She first explained a little bit about the private channel and how difficult it was to get accepted into it, writing…

“To give more context : the process for subscribing to this discord server was quite locked and intricate. You had to be invited, then validated by mods and admins, wait for some time and then, there was another process to be able to browse the server. I don’t remember the whole process exactly, but I remember it was a pain in the ass. Pretty suspect for a simple Nintendo Discord, right ? Keep reading and you’ll understand why.”

She also brought plenty of screenshots of the conversations the members were having in the channel. In particular she searched out their conversations related under-18 talk that included topics ranging from age of consent, to underage sex, to pederasty, to lolicons. The image album contains some of the members who were part of the channel, their discussions, and then it ends with the conversation between Cerium and Sykes.

Cerium looked over Sykes’ evidence and proceeded to dismiss the concerns, prompting Sykes to ask why he was playing devil’s advocate for them and why it was okay with the members of the secret ResetEra Discord channel to “brag about pedo tendencies”, to which Cerium replied…

“I do not think the conversation depicted in those screenshots show that.”

Sykes, befuddled, retorted by saying that she didn’t understand Cerium’s reaction, since by ResetEra’s own standards if they had talked about pederasty on the forums they would have been banned, so why weren’t they being banned from the Discord channel?

Sykes exclaimed that ResetEra bans people all day, every day over petty matters all the time. Sykes requested that ZhugeEX be banned or replaced, along with the other moderators who allowed those conversations to persist.

She pleaded with Cerium vociferously to take action against the members, stating how serious child abuse was to her, and that she felt as if Cerium was not taking her or the issue at hand earnestly. Cerium, however, refused to defenestrate the ResetEra members who engaged in the conversations, saying…

“If you think those subjects mean less to me you’re wrong. But I’m going to be honest and clear; accusing members of being “pedos” is avery serious accusation and something you know we take extremely seriously. It calls for a commensurate level of evidence, and I do not believe that you have shown that. I feel this is, in fact, about your ban and therefore I’m very uncomfortable with this conversation.”

In the screen capture of the exchange between Cerium and Sykes, she stated that she was baffled at Cerium’s response, noting that the three previous times she was banned from the ResetEra forums she never once came to him about the ban, and she felt as if his dismissive attitude toward the subject matter was concerning.

However, Cerium had blocked her at that point.

That’s when she went to NeoGaf with her story.

Some people agreed that the conversations were borderline disturbing, others didn’t think they were that bad.

Sykes tried to convince a few more people when she linked to the Twitter profile of one of the members of the ResetEra Discord channel named Casiopao, where he liked various lewd loli images on Twitter.

Shortly after Sykes posted the revelation of Casiopao’s fetish for lewd loli, he proceeded to lock his account down and make his tweets protected. 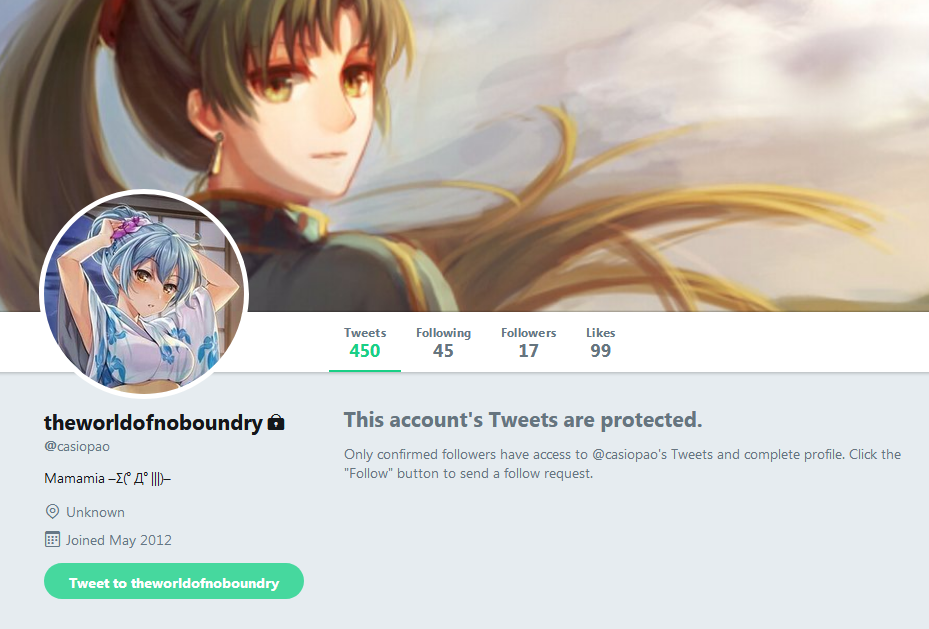 Again, some people didn’t think that talking about, liking, or engaging in lewd loli imagery was that bad.

The main issue, however, is that as NeoGaf members began to address the ResetEra moderators on Twitter about the topics being discussed in the private Discord, the moderators would block the people asking about it. 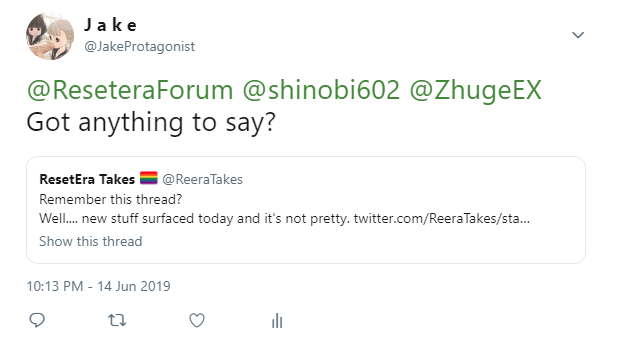 For the NeoGaf members, this created an appearance of guilt.

To make matters worse, users like cormack12 posted up multiple images of users who were banned or warned from ResetEra for “defending the sexualization of minors”, one of which occurred in threads like the one from December 4th, 2017 titled “Stop shaming and hating pedophiles”.

It certainly lends credence to the hypocrisy that Sykes was trying to address with Cerium: Why would the forum be so adamant to ban users for “defending sexualization of minors” while simultaneously allowing those same discussions to happen unfettered in their secret Discord channel?

Beyond a couple of people associated with ResetEra who tried to damage control the situation – and were promptly banned for their efforts – most people on NeoGaf saw this as a huge blow to ResetEra.

Some NeoGaf members apprehensive about jumping on the hate-wagon were a little less inclined to perpetuate the appearance of a witch hunt, asking for calmer thoughts and cooler heads. However, the more moderate approach was quickly abandoned by most members when things turned even more sour.

One of the members of ResetEra and the secret Discord channel intimated the threat of a lawsuit if Sykes didn’t stop posting about their conversations.

On ResetEra he goes by the handle of LordKano, but on Discord he changed his handle to flareon after Sykes began making posts about their conversations on NeoGaf.

He basically told Sykes to stop spreading around the images and the story about their conversations and not to involve him in any way. Since both of them are in Belgium and speak French, the conversation took place in French, but Sykes provided a translation in her post.

LordKano tries to frame the situation that she’s angry because she was kicked from ResetEra and that she has mental health problems, writing across multiple posts…

“Nobody had anything against you there, the decision (of being kicked) came from above and we didn’t have our word to say. And the only thing that you found to do was dropping out-of-context screenshots to try to call out some admin?

“[…] Anyway, I just wanted to see if it was another one of your crazy moments or if it was the confirmation there was nothing left to get out of you. It’s unfortunate because I liked our discussions, but well.

Unfazed by his connivance, Sykes replied by telling LordKano she had more to share and that she was waiting to see how ResetEra would react before moving forward.

“I’ll warn you to not going on with your bullshit before someone who cares (not me) seriously sues you for public slander. Now, be gone and avoid involving in those bullshits that have nothing to do with me.”

Shortly after Sykes posted their exchange on NeoGaf, LordKano changed his name on ResetEra to Passing Assassin, as spotted by user Xadraz. You can see an old archive from ResetEra proving that Passing Assassin used to be LordKano since they still share the same profile picture, in addition to a web cache from May 22nd, 2019 revealing his old user ID before the change.

Some people think this is all hot air and absolutely nothing. Others think that where there’s smoke there’s fire.

YouTuber Jason Kay did a good summary of everything that went down up to this point, giving both sides of the issue.

However, for those attempting to spread the news things haven’t gone over so well. One user has apparently been attempting to create threads about the topic on various Reddit boards but the threads keep getting deleted, which has led people to further believe that there’s a cover-up in play to protect ResetEra’s reputation.

The issue isn’t quite as clear cut as some might like to portray on social media. While some of the topic matter did veer into discussion of underage sex at times, majority of it that Sykes found distressful was themed around loli content. But even still, the private Discord channel definitely raises suspicion: why don’t they ban people on Discord for discussing matters that would otherwise net them bans on the ResetEra forum?

The other problem is that instead of addressing the issues raised by Sykes, the ResetEra administrators have basically swept it under the rug or have been blocking people asking about the topic.

I did attempt to reach out to ZhugEX to ask about the Discord channel and his involvement with the conversations taking place there, but he has me blocked on Twitter.

(Thanks for the news tips Jake, Lyle, Wondy Bergers, and ResetEra Takes)