Tifa Lockhart’s boobs in Final Fantasy VII Remake appear smaller than how they did in the original Final Fantasy VII that came out on the PSX back in 1997. Many diehard gamers noticed Tifa’s less bombastic boobs when she was finally unveiled during the E3 trailer at Square’s media conference. Well, it was confirmed recently in an interview with Famitsu by director Tetsuya Nomura that it was Square Enix’s ethics department that told them that they had to restrict her boobs so there wasn’t any “unnatural” movement such as boob jiggling (which technically isn’t unnatural at all) in order to prevent her from being too enticing.

Gematsu offered a bullet list of points that Nomura discussed in the Famitsu interview, translating the important pieces from the magazine. Regarding Tifa’s boobs being restricted, they explained…

“We wanted Tifa to have abs, so she has an athletic body type. The ethics department at Square Enix also told us that we had to tighten her chest as not to get unnatural during all the intense action. From there we got the black underwear and fitted tank top.”

[Update:] Twinfinite provided a full paragraph from the translation of the interview, detailing the following section regarding Tifa’s outfit and boobs…

“Developers wanted Tifa to have visible abs, so they gave her the body style of an athlete. There were instructions from the internal ethics department, and it was decided to constrict her chest [Editor’s Note: the context and wording indicate clearly that this refers to the tightness and design of Tifa’s clothing, not to her chest size] so that it wouldn’t look unnatural even during fierce action. Therefore, the team created a simple design for her upper torso, with black underwear and a body-fitting tank top. It’s a sporty design conscious of fitness.”

Aficionados were quick to point out in the reveal that Tifa was wearing sports bra undershirt to keep her from moving. This basically made it so that she has no boob physics at all.

It was quite noticeable during the scene where she was fighting the monsters but there wasn’t even a hint at wobble or even the slightest tinge of wiggle. 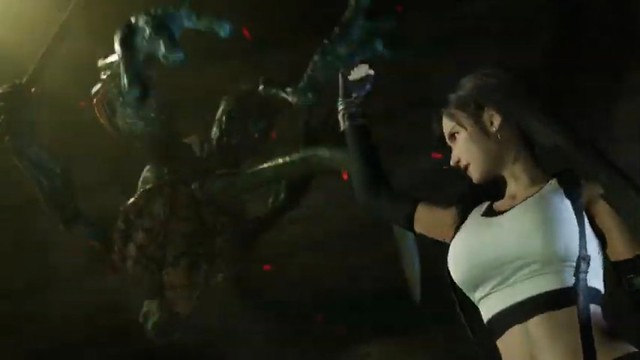 So I suppose it’s safe to say that Tifa was censored, since Square Enix specifically had Nomura to cover her up and place her in the spats and under armor sports bra so she wouldn’t be as sexually tantalizing as she was back in the late 1990s.

As many people pointed out over on Twitter, such as Hot Kasuragi, black sports bras are basically used as a way to diminish the sex appeal of boob jiggling. In a NSFW demonstration you can see what Tifa’s boobs may have looked like had she not had the black sports bra on underneath.

Why doesn’t #Tifa‘s #boobs jiggle in the #FF7Remake?
Answer is that black sports bra that prevents boobs from jiggling which also does in real life breasts to prevent unnecessary bosoms to blossoms. #Science pic.twitter.com/lCZvgedHcm

But that isn’t the only major change that they’re making to Final Fantasy VII Remake. According to the translation from Gematsu they’ve also made some changes to the Honey Bee Inn. Yes, it’s still in the game but it won’t be portrayed as it was in the original game…

“The Honey Bee Inn cross-dressing event is still in. We’ve made it more modern. If we made the facility like we did in the original game, the physical unease would be staggering, so that was no good…”

The physical unease would be staggering? I’m curious if that’s what was actually said or if there were liberties taken with the translation?

What we don’t know is if Square’s ethics committee has anything to do with Sony’s Censorship Officers. It sounds like they could be working toward the same goal, especially if they thought that Tifa needed an undershirt on under her white tank top. It sounds like something that would be demanded as part of the PS4 censorship policies.

Anyway, Final Fantasy VII Remake‘s first part is due out on March 3rd, 2020 for the PS4. It will be available on two Blu-ray discs. We don’t know when the second part is due out but it isn’t anytime soon.

(Thanks for the news tip Red)