If you thought that Google was only targeting political pundits on YouTube with their new policy in light of the VoxAdpocalypse, think again. Various YouTubers who don’t even dabble in politics have also been hit, including electronic synthwave artist Xurious, whose channel was terminated for “Hate Speech”.

The tweet went out on June 5th, 2019, with the U.K., music artist sharing the e-mail from YouTube about their channel being terminated. 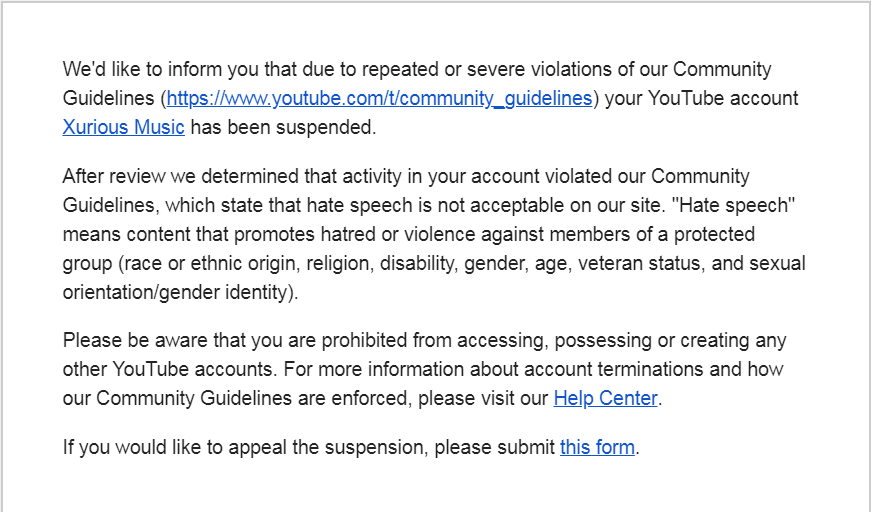 Xurious makes some cogent points how YouTube has targeted a lot of channels in particular while leaving other channels alone that have equally or more extreme content that should violate YouTube’s rules but somehow don’t.

The rap video in which a white boy was hung by a black man, also did not violate any of YouTube’s “Hate Speech” “rules”. pic.twitter.com/0pHjR5cgJx

Again, the “Asian” (Muslim) rap group from the UK that bragged about grooming and pimping out “White Girls” is still available on YouTube, despite the phenomenon of rape grooming gangs being a hugely traumatic social and political matter in the UK. pic.twitter.com/7AdkdfNegT

The rules as to what constitutes “Hate Speech” are obviously not being evenly applied. For Whites, mere instrumental music is enough to get you banned, but for other groups, hatred towards whites is not just tolerated, but endorsed.

If you’re actually curious what kind of music Xurious makes, he uploaded his tunes to Bitchute, so you can check them out for yourself.

Xurious wasn’t the only ones banned by YouTube. We reported yesterday that Varg’s account was also terminated after Vox’s Carlos Maza helped initiate the VoxAdApocalypse. In addition to those accounts, Twitter account Infinity Elements Productions also tracked some of the more notable channels affected, which included The Great Order being banned, while James Allsup, Red Ice TV and SinatraSays were all permanently demonetized.

Black Pigeon Speaks had some of his content removed, along with Count Dankula and Owen Benjamin, among many others.

There’s a Twitter thread from June 6th, 2019 recounting all of the affected channels.

More names in the #YouTubePurge;

Even more names from the #YouTubePurge;

Basically, YouTube is flushing out a lot of the channels that are against the Regressive Left.

This escalation of deplatforming and censorship is rapidly increasing as 2020 approaches and big tech are ensuring that any opposition to their agenda will be duly stifled or demonetized so there’s very little incentive to even discuss those topics.

The White House is still moving quite slowly in gathering data related to major social media censorship. There’s also an ongoing antitrust investigation that has been launched into Google, Apple, and Facebook in coordination with the Justice Department and the Federal Trade Commission, as reported by Market Watch. So there’s a smidgen of hope that there will be government interference into the big tech social engineering propaganda that they’re using to reel people in who are too weak to fight back, or weed people out who refuse to kowtow.

(Thanks for the news tip Andredal)