What happens when you combine a lot of second-rate replacement heroes made up of diversity hires, random alphabet selections from the sexual orientation soup, and a bunch of unlikable kids mirrored after the most insufferable San Francisco dillweeds you would be cursed to encounter on social media? You get Marvel’s Champions. Well, the woke-ridden relaunch featuring a bunch of the hated hero replacements of the originals has been cancelled and will wrap up at issue #10.

The news was actually rolled out by Marvel writer and artist Jim Zubkavich, who informed readers about the end of his run of Champions after just 10 issues. Zubkavich posted the news on his Zub Tales blog, writing…

“Once the October solicits arrived online, I knew discussion would start around our current run. It’s with a heavy heart that I let all of you know CHAMPIONS will be wrapping up with issue #10.

“I built this new take on the team as a way to try and bridge classic teen superheroic drama with an eclectic cast of characters – old school Marvel brought to the present with a new generation of heroes.

“I took a risk with the book and it didn’t click the way we hoped, so my long-term plans for the series have been cut short. That’s the way it goes sometimes.

“It hurts. Dressing that up any other way would be disingenuous. I wish it had worked out. I’m sorry I let you down.

“The readers and reviewers who keyed into what we were going for were incredible. Their excitement kept us going month after month. If you didn’t get a chance to read the current run, I hope you’ll consider giving us a shot in single issues, collections, or digital.”

The readers who “keyed” into the Champions run weren’t many. In fact, the series got off to a less than lukewarm start at the beginning of January, 2019, where Comichron notes that the first issue of the relaunch debuted in 71st place with only 30,800 issues ordered.

That’s a huge far-cry from when the first issue ran during the initial run three years ago, where Comichron’s list of comic book sales shows Champions in second place behind Big Trouble in Little China/Escape From New York City, moving 328,000 units back in October, 2016.

The drop-off is no shock at all given that the Champions comic is composed of some of the most reviled teen heroes in the comic book industry today. There’s the Muslim Ms. Marvel, Amadeus Cho who is a Korean Hulk, the black Falcon, the Patriot, Moon Girl, Honey Badger, Cloud 9, Silk, Viv Vision, and Iron Man’s piss-poor replacement in the mentally ill Ironheart, to name but a few. 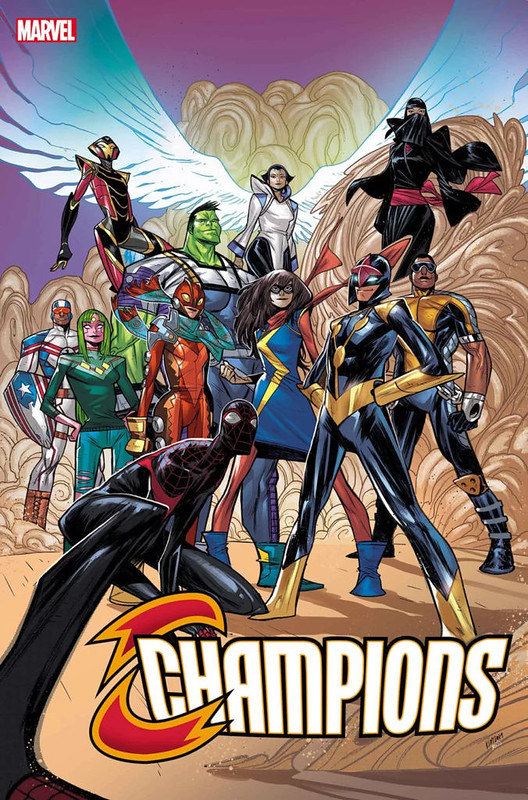 As is typical with these stories, they’re filled to the brim with with a lot of non-white guys most people don’t care about, with the exception of Nova and Cyclops.

For instance, they have the niqab wearing Muslim, Dust, ensuring that they get their Afghan representation in there, along with dedicating a nonsensical character trait to Vision’s android daughter, Viv, who was revealed to be a lesbian after she kissed Riri “Ironheart” Williams. Yes, we’ve moved into teenage, lesbian, interracial android dating, folks.

I wish I was joking, but this is what’s described on her Marvel Fandom page….

“Viv has stated “…I have yet to thoroughly acquaint myself with a full enough sampling of sexual and gender identities to as yet determine my own — an attraction to boys is nowhere within me…” implying that she does not identify as heterosexual and may eventually identify as homosexual or asexual.[19] Her sexual orientation was ultimately confirmed by the fact that she kissed Ironheart.”

It’s no wonder that manga sales are dwarfing comic sales in the U.S., the way The Rock dwarfs Kevin Hart.

Anyway, if you rolled your eyes at that silliness, you can already imagine how many comic book readers noped out after that. Hence, the poor sales and cancellation this October.

According to Zubkavich, this won’t be the end of Champions, though. Marvel will eventually reboot it… just that he nor his fellow peers will be at the helm. In the blog, Zubkavich wrote…

“If you’re reading this and lamenting the future of your favorite young heroes, I can tell you that there are big plans for Marvel’s teens in 2020. I’ve heard about the next stage of the Champions story – It’s exciting, vibrant, and absolutely worthy of the House of Ideas. I’m a bit wistful that it’s not mine to tell, but also hopeful for the future of these inspiring young heroes.”

While he may be “wistful” about the future of Champions, the present is all too happy to welcome the failed abomination on a little something-something around these parts that we like to call the Get Woke; Go Broke – Master List.

(Thanks for the news tip Allen)