[Update 7/10/2019:] Facebook has updated its Community Standards, and have removed the section that granted exceptions for death threats.

Facebook’s RESPONSE for their policy change that had APPROVED violence against @PrisonPlanet and others?

“The language we previously used to describe our policies against violence and incitement was imprecise.” https://t.co/ywZwggHbIp pic.twitter.com/QEWQSi35ti

[Original article:] In a not-so-startling twist, Facebook updated its community standards, reinforcing some of the common rules that were already in place, while also extending the rules in ways that could be potentially dangerous for people.

The update was actually spotted by software designer Mark Kern, who highlighted the new rule change by Facebook in a tweet.

Wait, FB, like…violence and death threats against Nazis are okay?

FB: “Whoever the media tells us.” pic.twitter.com/YhdGbUIma2

This isn’t manipulation or an edit. If you head to the Facebook Community Standards page, they roll out the highly controversial text as part of the July update. 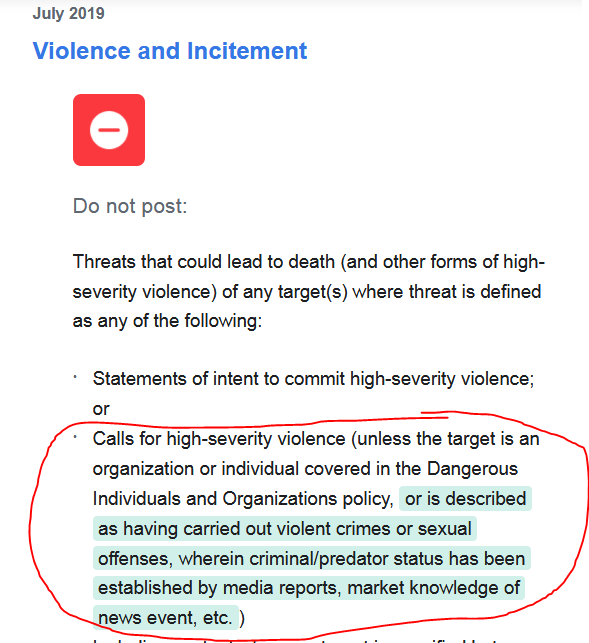 “Threats that could lead to death (and other forms of high-severity violence) of any target(s) where threat is defined as any of the following:

“Statements of intent to commit high-severity violence; or
Calls for high-severity violence (unless the target is an organization or individual covered in the Dangerous Individuals and Organizations policy, or is described as having carried out violent crimes or sexual offenses, wherein criminal/predator status has been established by media reports, market knowledge of news event, etc.)

“ Including content where no target is specified but a symbol represents the target and/or includes a visual of an armament to represent violence; or

“ Statements advocating for high-severity violence (unless the target is an organization or individual covered in the Dangerous Individuals and Organizations policy, or is described as having carried out violent crimes or sexual offenses, wherein criminal/predator status has been established by media reports, market knowledge of news event, etc.); or

“ Aspirational or conditional statements to commit high-severity violence (unless the target is an organization or individual covered in the Dangerous Individuals and Organizations policy, or is described as having carried out violent crimes or sexual offenses, wherein criminal/predator status has been established by media reports, market knowledge of news event, etc.)

“Content that asks or offers services for hire to kill others (for example, hitmen, mercenaries, assassins) or advocates for the use of a hitman, mercenary or assassin against a target.”

There’s a lot to unpack here, but first and foremost, we have to look over what Facebook defines as “Dangerous Individuals and Organizations”.

This is actually featured in the Community Standards under its own sub-heading, where it reads…

“We also remove content that expresses support or praise for groups, leaders, or individuals involved in these activities.”

To break this down further, what they’re saying is that if the news media has classified a group or organization as being “dangerous”, then the death threats and calls to incite violence is okay. So when the Southern Poverty Law Center claimed the Proud Boys were connected with “white supremacists”, is Facebook giving people the go-ahead to use death threats?

When the Anti-Defamation League labeled Pepe The Frog as a “hate symbol”, and the media claimed that the people who use Pepe memes are “Nazis”, is Facebook saying it’s okay to to use death threats and incite violence against these people because they’ve been labeled as “dangerous”?

Anyone with common sense knows exactly how dangerous this is given that the media and Left-wing groups basically label anyone who is a political dissident as a “Nazi”, and usually encourages or passively advocates their deplatforming. In this case, however, Facebook is literally saying that they’re making exceptions to death threats and incitement for violence if it’s against “dangerous” groups or organizations.

Keep in mind that Facebook also banned Laura Loomer, Milo Yiannopoulos, Alex Jones, and Paul Joseph Watson for having “dangerous” ideas. But what made them “dangerous” exactly? According to Facebook, they would fall under the “hate organization” label, which is described as…

“Any association of three or more people that is organized under a name, sign, or symbol and that has an ideology, statements, or physical actions that attack individuals based on characteristics, including race, religious affiliation, nationality, ethnicity, gender, sex, sexual orientation, serious disease or disability.”

So basically, anyone can be considered a “hate organization” if at least three people agree with you on an idea or statements you made that Facebook feels “attack” anyone for the aforementioned reasons. Basically, it’s ill-defined enough to allow them to redefine the rules as they see fit, which is typically oriented around protecting Left-wing ideology.

What’s more is that based on the language Facebook used in the policy update, does this mean Facebook is openly saying it’s okay for their users to send death threats and incite violence against people with “dangerous” ideas?

What’s funny is that Liberals and Left-wing activists constantly argue that private corporations don’t have to honor the First Amendment or adhere to freedom of expression, yet I wonder if they would also defend a corporation allowing for users to engage in forms of speech – such as calls to incite violence – that aren’t protected by the First Amendment?

One also has to wonder if this will work both ways or if Left-wing domestic terrorist groups like Antifa will be unaffected by these measures?

That’s also not to say anything about the fact that people calling for death threats against others that actually leads to real-world physical violence would put Facebook into some seriously legal hot water.

People should definitely be wary that a big corporation like Facebook is making exceptions for death threats, especially during these politically tumultuous times, because it’s giving people an opportunity to encourage real-world violent behavior.