Henry Cavill looks great as Geralt of Rivia, along with Freya Allen as Ciri in Netflix’s rendition of The Witcher. However, the rest of Netflix’s streaming take on Andrzej Sapkowski’s classic Polish series looks awful. Triss Merigold doesn’t look anything like Triss; the casting for Yennefer is wrong on every account, and what they did to the elves is disgraceful.

Netflix released the new teaser trailer for the upcoming streaming series, and it’s even more pozzed than any of us thought. The original captures from the set definitely showcased a lot of subversion at play, but the trailer takes it to he next level, revealing that this is not The Witcher series for fans, but rather designed to further the propaganda and agenda-driven indoctrination that has been the foundation of Netflix’s curated programming.

You can check out the trailer below to see exactly what I mean.

So first and foremost, Cavill seems to capture the tortured, violent lifestyle of a Witcher; a mercenary who wanders the land in search of the next great battle and a few coins for his trouble.

I feel like he’s a little slow on the draw when it comes to his swordplay compared to what I was hoping for, and I feel like someone such as Mads Mikkelsen carries less mass to make him more viable for executing fluid sword motions, but Cavill definitely looks like he put in the work and the effort to take the role seriously, so I have to commend him for that.

From there, however, everything begins to sink into a bottomless pit of disappointment. Triss, especially, looks awful. I knew from the start when they race swapped Triss for Ana Anna Shaffer it was going to ruin the character. The starry green eyes and burning red hair of Triss Merigold are replaced with the fuzzy brown locks of Shaffer’s race-swapped turn as the character. A far cry from what fans wanted. 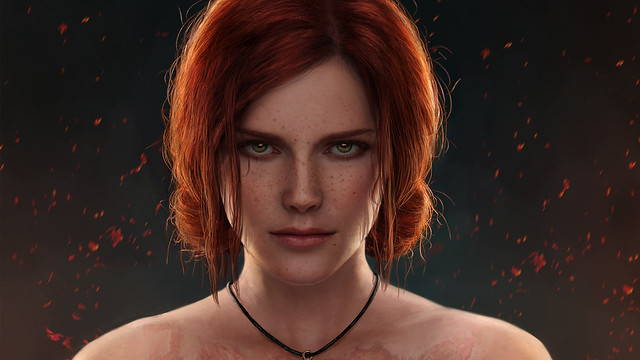 Nothing about Anna Shaffer looks anything remotely like what fans expected Triss to look like. There are a dozen and one other unknown actors they could have picked up from Poland, Sweden, Denmark, Norway, or Finland who would have looked perfect as Triss, but the diversity agenda sitting in the driver seat at the bottom of the showrunner’s soul denied her the better judgment she should have exercised, and instead went with the choice that furthered Netflix’s clear and biased agenda to destroy the threads of Western culture.

It makes me sick.

You can see what the wood elves look like in the image below.

It’s pretty obvious what they infer through the voiceover and the imagery: the elves taught the humans how to turn “chaos” into “magic”.

So the black elves taught the white humans how to use magic, eh?

Dirty Centrists™ will tie themselves into knots trying to defend Netflix’s degeneracy claiming that it’s “based on the books and not the game”, but we’ve seen the writing on the wall since the showrunner, Lauren S. Hissrich, originally tried to cast a BAME as Ciri, and was rightfully given enough pushback that she had to take a break from social media.

While Hissrich eventually conceded to fans and gave them a properly casted Ciri, she used her powers to race-swap Yennefer, Triss, and Fringilla.

It’s no wonder that Netflix’s subscriber count is dropping, as reported by AP News.

People are sick and tired of cultural subversion and agitprop. Absolutely sick of it.

If you had any hopes for the Netflix series being any good, you should dash them now before they swell and pop, leaving your soul a hollowed carcass of dried tears and inconsolable sullenness.

(Thanks for the news tip s_fnx)