Monkey Moon and Black Muffin’s Night Call was published over on the Steam store by Raw Fury, the same publisher who seemingly abandoned the highly anticipated cyberpunk tale The Last Night from French developer Tim Soret after they forced him to apologize to the broke grifter Anita Sarkeesian for criticizing the militant and authoritarian forms of feminism. The indie title is also available on PS4, the Nintendo Switch and Xbox One, and there are some gameplay walkthroughs available for the title.

For gamers who picked up the interactive simulation, YouTuber PlantPowers has a gameplay walkthrough available for Night Call, which you can check out below.

The game starts with five different cases you can select from, including “The Judge, “The Angel of Death”, “The Sandman”, “Surprise Investigation” and “Random Investigation”.

Once you select the investigation you’ll be able to choose the difficulty mode, with “Story” being made for game journalists, “Balanced” offering a mixture of difficulty and story, and “Hard” being very difficult to play.

If you start with The Judge, it will open with a short cinematic where a taxi driver will be assaulted by a serial killer known as The Judge. The taxi driver will wake up in a hospital after spending some weeks in the hospital.

You can ask the doctor a few questions about The Judge before a month pasts and the taxi driver is finally out of his coma.

Night 1 starts in the middle of Paris with your boss in the backseat.

The conversation with the boss works as a tutorial of sorts. You’ll use the map to find customers, pick them up, and then drop them off at their location.

The map will show you various customers you can pick up on the map and the various fares you can pick up around the map. Different fares will reward you with different amounts, as well as cost you some fuel and time.

You can pick up various passengers and sometimes talk to them, such as Sonny Talpa.

You can check the Passidex that will allow you to see all the passengers you’ve interacted with throughout the game up to that point.

In the walkthrough Purva Rao is the next passenger that he picks up.

You can ask Purva some questions. She’s Indian who is afraid of the arranged marriage setup for her in her home country as she’s being driven to the airport. If you befriend the passengers you can gain additional tips.

After your second passenger, Busset will hop in and push the plot forward by mentioning that she will use you to help get information on The Judge. 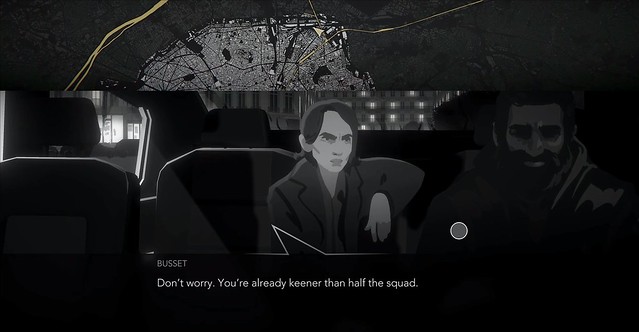 After Busset leaves the taxi, you will be able to go over the clues and evidence that you have uncovered during your shift.

This opens up a new segment of the game where you can investigate the evidence you have, which includes the autopsy reports that Busset gave you, along with some photos of potential suspects.

The way it works is that as you examine the evidence you lose time, but you will gain new clues and locations.

BR>
Once you view the evidence you’ll lose time on the clock but will have more of the evidence appear on the bulletin board. Click on the yellow board post-it to swap between the board and the desk.

So your objective is to align the facts with the suspects on the board. If you don’t have any concrete clues, simply head to sleep until you can gather more evidence to assign to the suspects.

In order to move the story forward you can visit the eye icon on the map. The first one is at the embassy.

You’ll need to spend 250 euros to gain access to info on Gorodischer from the informant.

You’ll learn that Gorodischer was a colonel that was never put on trial and he was known for torturing and killing people. You’ll also learn what the clue “Time’s up!” means, a slogan used by the killer.

There’s also a cat passenger, but the cat will only give you €5.00, so it’s probably best you pick up Christophe Lerien or one of the other passengers after getting the information from the informant.

Remember, the more friendly you become with the passenger the more money they will give you as a tip.

During the conversation with Lerien you can exchange stories with him and you’ll get a near €5.00 tip in addition to an ample fare from him.

There’s also Santa you can give a ride to, as well as a black guy named Sean who will give you near €30.00 for a fare.

At the end of Night 2 you will gain new clues and more evidence.

Busset will give you some more clues, and you’ll gain some info including two new folders and a photo of the crime scene. You won’t have enough time to scour all of the evidence, but you will be able to go over at least one piece of evidence.

If you examined the bullet evidence during Night 2, you’ll have access to new clues at the start of Night 3, which includes being able to visit Dock Army to ask about the shell casing.

Madame Brochant will reveal several new clues, including that the shell casing comes from an old weapon, either from a cop or a soldier.

Head to the next point of interest and ask Marco about the victim Ronan. Marco will explain that Ronan was a child molester and was killed two days after he tried to rape a young boy in the showers.

If you listen to the news you’ll also gain a new clue about someone linking The Judge to organized crime.

You can pick up some additional fares, such as Nina, who is a short drive for some decent coin.

After your third customer of the night you’ll gain access to a newspaper and learn about a bar called “Napo”.

Read the two files, and then link up the clues on the evidence board.

Busset will give you three days to narrow down a suspect for The Judge.

Busset will clear one of the suspects from the board, leaving only four suspects.

Two new clues will appear on the map.

One of the clues is the police archives.

Helene will give you an additional clue that will help your case.

With just a couple of days remaining, there are no new points of interest on the map, and essentially you’ll have to gather your remaining clues from specific passengers.