During this year’s San Diego Comic-Con, Marvel and Disney went all-in on the diversity agenda. After announcing that Thor would be replaced with femThor played by Natalie Portman in the upcoming Thor: Love and Thunder, Marvel went and completely destroyed the Eternals casting by race-swapping or gender-swapping majority of the heroes.

The post Avengers: Endgame line-up isn’t looking all that interesting, but it looks even less interesting when you when you see anyone beyond the two main cast members for the upcoming film. The details were rolled out via a tweet on July 21st, 2019, listing who will play who in the live-action adaptation.

As you can see, only Thena and Ikaris are properly cast. Angelina Jolie will step into the role of Thena while Richard Madden will play Ikaris.

They completely miscast the comedian Kumail Nanjiani as the Japanese samurai Kingo. Literally the casting makes no sense at all. They also decided to replace a Japanese themed character with an out-of-shape, flubbery Indian comedian. This role should have gone to Hiroyuki Sanada, plain and simple.

Ajak, another white male, is turned into a Hispanic female, and will be played by Salma Hayek.

Phastos… yet another white male, is being turned into a black male, and will be played by Brian T. Henry. Henry, by the way, looks NOTHING like the comic book character at all, and if this was a caricaturization for an SNL skit to defame and make fun of The Eternals then that would be the only way this casting call would make sense. Otherwise it’s debased and an absolute disgrace to the history of the character.

But worse of all is what happens to Makkari… this character is a straight, white male who is turned into a deaf, black female. 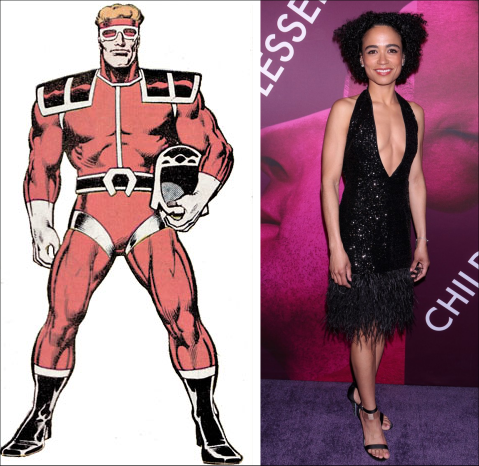 That’s right, not only did they race-swap Makkari, they gender-swapped him, and then they sense-swapped him. He can’t even speak anymore because the actress, Lauren Ridloff… is DEAF!

It’s the ultimate affront to casting, and literally just shy of a gay, black, lesbian cyborg. Only this time it’s a deaf, black, woman.

The verdict is still out on whether they’ll hit the token jackpot and make Makkari a lesbian, too. At that point it would be a deaf, lesbian, black woman who is supposed to be portraying a straight, white male. But keep in mind that earlier in the year it was already confirmed that one of the Eternals would be made LGBTQIA. So it’s just a matter of figuring out which one. They might make Ikaris gay just to further erase any depiction of a straight, white male in mainstream movie media and continue to push their culturally degenerate agenda on everyone.

There isn’t one true fan who should be happy about this news at all.

And that’s not to mention that Sprite has been turned into a little girl. At least he wasn’t race-swapped like the others, though.

Amid all the corporate schlong-sucking going on in the Twitter feed, a few people were rightfully pointing out how Marvel and Disney’s culture-destroying agenda was not appreciated.

If u gender swap 1 character ok i’d be dissapointed but i could live with it. But they gender swapped 3 fucking characters. What the f*ck

At this point Marvel is the face of FEMINISM

Skip to much sjw woke bullshite for me

As you can see, even normies are getting tired of all of this nonsense.

The time to rise up is now. People need to spread the word that Disney has no means of providing entertainment for you, it’s all about indoctrination.

Their main goal now is to destroy any semblance of societal structure and enjoyment, and doing so by creating rifts that divide people along cultural lines by usurping what people enjoy and brandishing it for the purpose of inciting racial resentment, political fatigue, and anger within the core demographic. Disney is brazen enough to believe that the hebetude of the masses is enough for them to carry out their agenda unperturbed.

However, the best thing anyone can do is not watch.