Close the door, pull up the covers and whip out your socks, boys, because we have a hot one for you tonight. SNK and Netmarble released the latest update for The King of Fighters Allstar, which features three new but old characters. Well, technically it’s old characters done in new ways… specifically turning a few of the dudes into hot chicks.

While Westerners are busy race-swapping and gender-swapping with the purpose of enraging fans and destroying Western culture, Japanese and South Korean developers are intent on pleasing the fans with new takes on old faces. In this case, we see that characters like Yashiro Nanakase are given a super-hotty makeover with big boobs, short-shorts and no bra, so you get to embrace the full breadth of the boob jiggle. You can check out the trailer below.

I have to admit, I never liked Yashiro. He was always lame and annoying, like a bigger, slower version of K’ with fewer cool moves.

As a hot waifu, though? Well, Yashiro seems to be rocking it, and his brutish style and heavy hits seem to work well enough in the 3D brawler environment compared to the more restrictive 2D fighting plane.

Someone who I don’t think fares better in the beat-’em-up capacity compared to their 2D outing is Billy Kane, who also got the waifu treatment. You can check out the trailer below.

The special moves are definitely top notch and can clear out the enemies quite easily, but the rest of the moves seem a little stilted and not quite as fine-tuned for fighting multiple enemies. But this is because Billy’s moves were designed for one-on-one fights, so instead of peppering enemies with a lot of quick bo strikes there are a lot of moves that rely on Billy’s redirection and air juggling, which isn’t the best for fighting multiple opponents.

Even still, the female versin of Billy has one leg exposed, an ample chest size, and long blonde hair and blue eyes, something that we don’t see anymore in Western media.

However, the biggest change is Chang Koehan, who went from a threatening, long-bearded criminal to a small, full-haired loli. 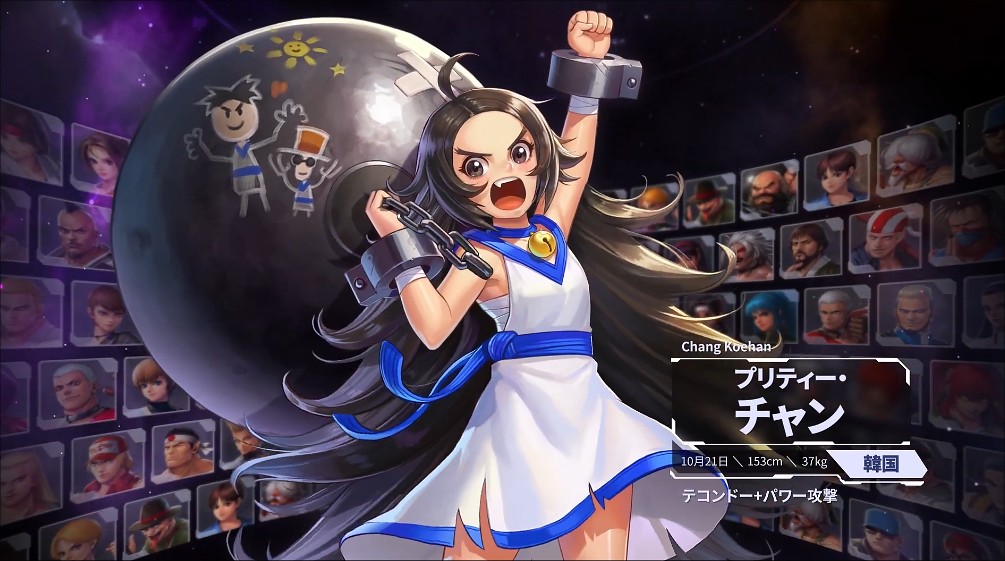 It’s funny because not only did they complete reverse Chang’s bald head and thick beard into a long-haired loli but they also shrunk him and made him thin. He’s not just gender-swapped he’s size-swapped, too!

To make the change even funnier is that his giant ball and chain is still being lugged around by the tiny loli, so it creates the most ridiculous scene you can imagine. Top it off with Chang still being mean and violent, and you have on your hands a cute little girl with a big wrecking ball and a screen full of bested baddies who get steam-rolled like female MMA fighters trading fisticuffs with Fallon Fox.

I also have to say that Chang as a loli fighter in a beat-’em-up actually works. The large-sweeping attacks and crushing blows are perfect for quickly clearing out the screen. It almost makes me want to play a real beat-’em-up game on the Nintendo Switch or PC. It’s such a shame King of Fighters Allstar is relegated to mobile devices.

Anyway, the game is scheduled to head West later this year, so you’ll be able to check out the full game with the gender-swapped hotties and lolis once it arrives Stateside.

For more info on King of Fighters Allstar be sure to check out the official website.

(Thanks for the news tip Hot Katsuragi)