Pro-#GamerGate Twitter user Mombot was known for exposing the Social Justice activists on Twitter; highlighting the malfeasance of game journalists, and even doing a Medium exposé on a harasser that was hiding among the ranks of Zoe Quinn’s Crash Override Network. 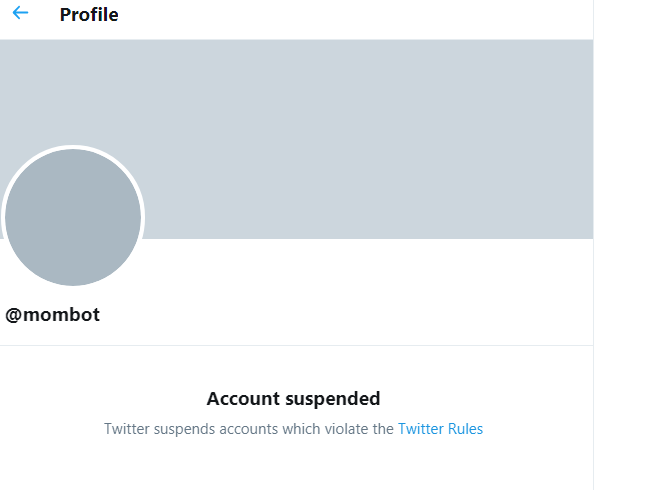 No one really knows what led to the suspension. The last interaction Mombot had was with Forbes’ Paul Tassi, according to some users. There are rumors that she may have said something that Twitter’s staff didn’t like, which resulted in the ban.

According to the Google cache from just before the ban, Mombot had interacted with Tassi, who was trying to hold a public discussion about females being harassed in the gaming industry.

Mombot was constantly being reported and targeted by those who have been intent on getting the account deplatformed for exposing the Left-wing activists and their agenda.

Mombot was known for being snarky and trolling the easily offended propagandists on the Left, and this angered them greatly. There was also a list that Mombot kept of all of the male feminists and Social Justice types who had been outed as sex pests or having engaged in alleged sexual misconduct. There’s a similar list on One Angry Gamer, which chronicles many of the anti-#GamerGate types who came out against the pro-consumer movement to get propaganda out of games and clean up the corruption within the games media.

Regardless of all of that, whatever happened on Twitter recently led to Mombot’s account finally getting nuked by Twitter and I’m sure all of those organized harassment groups that were intent on getting the pro-#GamerGate figure deplatformed are probably cheering in their little safe-space corners of social media right now.

(Thanks for the news tip Lyle and Trevor)