Various sci-fi authors are facing page deletions on Wikipedia after various Left-wing editors nominated the pages for deletion on the grounds of the authors not being notable, or for their fanbase being “bigoted”, and “racist”, and filled with “hatred”. There’s currently a battleground on the author pages of Wikipedia where certain editors are attempting to erase an internet checkpoint for the authors due to disliking what little they’ve gleaned of their politics.

There’s a current vote taking place over on the Wikipedia page for military veteran and sci-fi fiction author, Michael Z. Williamson. Various editors are claiming that Williamson isn’t notable, and that there’s nothing notable about his Wikipedia page despite being a Hugo nominated author and having various best-selling books.

After one of the people voting to have his page deleted encountered resistance from Williamson’s fanbase, they retorted…

“Now if you’ll excuse me… after wading through the cesspit of bigotry, hatred, foul mouths, and rampant racism that is his tiny “fan base”, I need a good shower. And maybe reverse peristalsis.”

This received even more pushback from Williamson’s fans, who also called out other Leftist authors who are bigoted and racist against whites.

There’s a strong political battleground unfolding on Williamson’s page, as his fans vote to keep his Wikipedia entry while Leftists vote to delete the page.

Over on Facebook, Michael Z. Williamson responded to people attempting to speak up on his behalf on the Wikipedia talk page, explaining in a post made on July 23rd, 2019…

“That actually won’t help. It requires citations on why the article is relevant, from people who can make that point.

“Then, they’ll either claim you’re a “Sockpuppet,” or that the source is invalid, or not verifiable, etc.

“I’m not the first person they’ve done this to. And they are now also going after Kratman and Hoyt. It’s blatantly an orchestrated attack on whom they think are “right wing” authors. Except neither I nor Sarah can credibly be called “right wing” unless you’re too ignorant to grasp the definition (which is most “liberals”).”

This is actually happening on his talk page, where some people voting to keep the page are being accused of brigading the vote.

The same thing is also happening to the other two sci-fi authors that Williamson brought up in his Facebook post, Sarah Hoyt and Tom Kratman.

If you visit Kratman and Hoyt’s Wikipedia pages, they’re both up for deletion, just as Williamson mentioned.

Hoyt has written dozens of stories and is considered a notable author in the genre, many believe that Wikipedia editors targeted her entry on the site due to her involvement with the Sad Puppies, as recounted by The Digital Reader.

Tom Kratman, another Hugo-nominated author and military veteran who contributed a number of notable works in the science fiction field was also targeted by Left-wing media pundits for being part of the Sad Puppies campaign, to which Open Democracy wrote an article back on August 15th, 2015 about authors like Kratman in a piece titled “Sad puppies, rabid chauvinists: will raging white guys succeed in hijacking sci-fi’s biggest awards?”

As pointed out by Delarroz, the Wikipedia editors were briefly successful in deleting Williamson’s Wikipedia entry before the overwhelming support of his fans helped restore the page. The article attributes his targeting by Left-wing activists to his stalwart dedication to overcoming the agenda-pushing politics that had invaded sci-fi at the time, diluting the quality of works being produced and dampening the overall zeal that most fans had for the literary fiction. 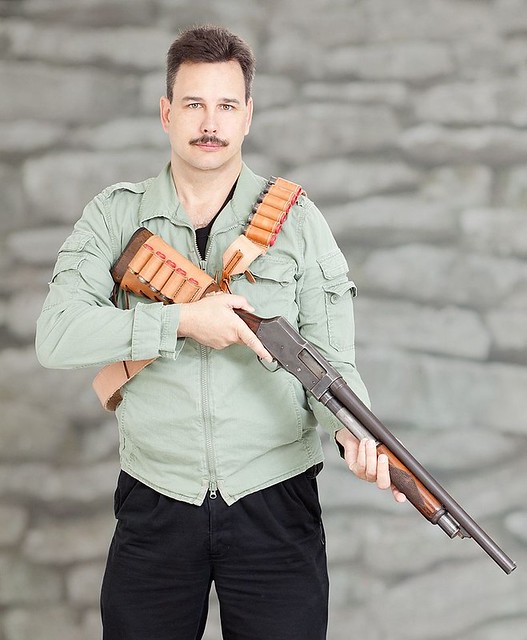 In Williamson’s blog he was actually far less concerned about the Wikipedia page deletion than his fans, basically saying good riddance to it, writing…

“The page is gone, and it’s a relief. My fans shouldn’t have to grovel, degrade, and humiliate themselves before a “consensus” of social failures to document that a best-selling, award-winning author with over 20 publications and 100 editions in 3 languages is more culturally relevant than a disgusting freak who was fucked to death by a horse. https://en.wikipedia.org/wiki/Enumclaw_horse_sex_case

“I think I last checked in on the page in 2015. On my list of priorities, if #1 is sex with my wife and our girlfriend, and it is, taking my daughter to the museum is about #3, writing my current contracts is #5, showering and wiping my ass is about #12, pulling out the stove to scrape the congealed grease is #57, identifying that weird tree way up the hill on the fence line is #348, and giving a shit about some page argued over by fat, angry, pompous failures is approximately #4,762,051.

“The fact is, Wikipee is irrelevant, and my sales and credentials do not depend on it for either existence or credibility. A simple google search finds me, and you can get direct info without ‘consensus.’”

So… his wife is the cuckquean in that relationship? Right on, Williamson… right on.

(Thanks for the news tip Martyn Bennett)