Crying Is Not Enough Gameplay Walkthrough

Storyline Team’s Crying Is Not Enough: Remastered came out back in the summer of 2018 over on the Steam store. The indie game out of Messinia, Greece are currently looking to port the remastered version of Crying Is Not Enough to PS4 and Xbox One, giving home console owners another third-person, survival-horror experience not unlike what was made available early in 2019 with the Resident Evil 2: Remake.

For gamers who have Crying Is Not Enough or those looking to get the game on home console, there are walkthroughs available to help you out with solving puzzles and beating some of the enemies.

YouTuber wolftooth has the full walkthrough of the game, which clocks in at just under three hours. You can check it out below.

The game starts with a cinematic of the main character, Jacob, talking about revenge while carrying Claire.

The game then transitions into Jacob’s apartment. Go pick up the phone, and then leave the apartment and go downstairs.

Head outside to the sidewalk and another cinematic will play.

The Unity-powered survival-horror game struggles between transitions, but eventually Jacob makes his way to the empty hospital.

Go to the elevator on the right side of the first floor. The other elevators don’t work.

Head through the halls to the doctor’s office and yet another lengthy cinematic will play.

For some bizarre reason they put the old wrinkly lady, Claire’s mom, in a mini-skirt.

I was ready for a long of things, but I wasn’t prepared for gerontophilia.

We finally get the title screen, and then yet another cinematic plays.

An old man who looks like a pasty ghoul approaches the general who tells him to “fix it”, and then we finally get to the actual gameplay.

Head left toward the burning trash fire and make your way to the shack.

Take the items inside.

There’s a safe box with numbers scrawled on the side: 1957

Exit the shack and head back up the pathway from whence you came.

There’s a monster banging its head on a rock.

Kill the zombie by shooting it in the head a couple of times and proceed to the abandoned construction site.

Go over to the oil tanker near the destroyed bridge and take the full oil tank off the side of the tank.

You won’t be able to get into the building because the door is locked. Make your way through the fence and follow the narrow pathway through the forest to a small shack. Take the items on the desk and then exit the shack and make your way across the small overpass.

There’s a crashed plane with a zombie hiding in the bushes.

You can outrun the zombie and make your way across another bridge that leads you to an abandoned facility. 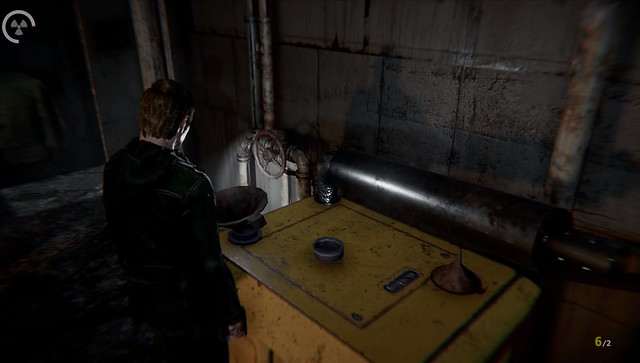 Make your way all the up the stairs to the top of the station and go inside the lift.

This will take you to the next area.

There’s another zombie at the destination. Kill the zombie and go inside. Make your way down the stairs and there’s a scratched bronze coin in the northeast corner of the room. Exit the station and head down the steps.

There is radioactive waste spilling out of the barrels, try not to step in it.

Another cinematic will play once you get past the barrels.

Following a lengthy cinematic where it looks like Jacob got robbed of his kidney, but from the wrong side, Claire will tell Jacob to wake up and will unlock the door for Jacob and give him a radio.

There are two scratched bronze coins inside the sink. Take them.

Exit the cell and you can either play Cubica or save your game at the arcade station using the bronze coins.

You’ll need to find a key to get through the locked door.

Take the elevator up to the next level and avoid the bag-head man with the pick-axe and run through the opening past the mine cart.

There’s another zombie on the other side of the door with a bomb on its head. You can either shoot it or ignore it and run to the gates that lead to the next segment. 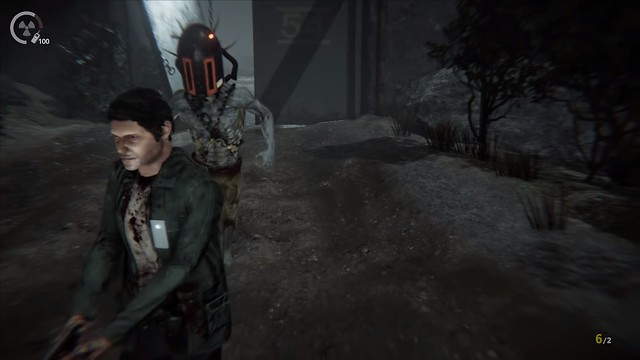 There’s also a half-full health syringe inside one of the open containers.

Another bomb-head zombie is further down the container yard, as well as an open gate that leads to a broken fuse box to your left. Go inside the gate and take the working fuse.

Continue through the container yard past another zombie – you can either kill it or ignore it.

Head around to the broken door at the warehouse and there is some more pistol ammo inside, in case you need it.

Once you get all the items you need, make your way back towards the gate from whence you came and proceed through the door way to the previous segment. Follow the pathway to the the right and go through the gate.

You’ll get some backstory on Jacob and his parents’ death while you make your way toward the guard station. Claire will give you two objectives: destroy the plane in the hangar and disable the jammer that prevents communication with the outside world.

Head into the truck yard with the containers and make your way up the stairs to the radio tower. You’ll need to restore the power.

Head back down and go inside the command center. 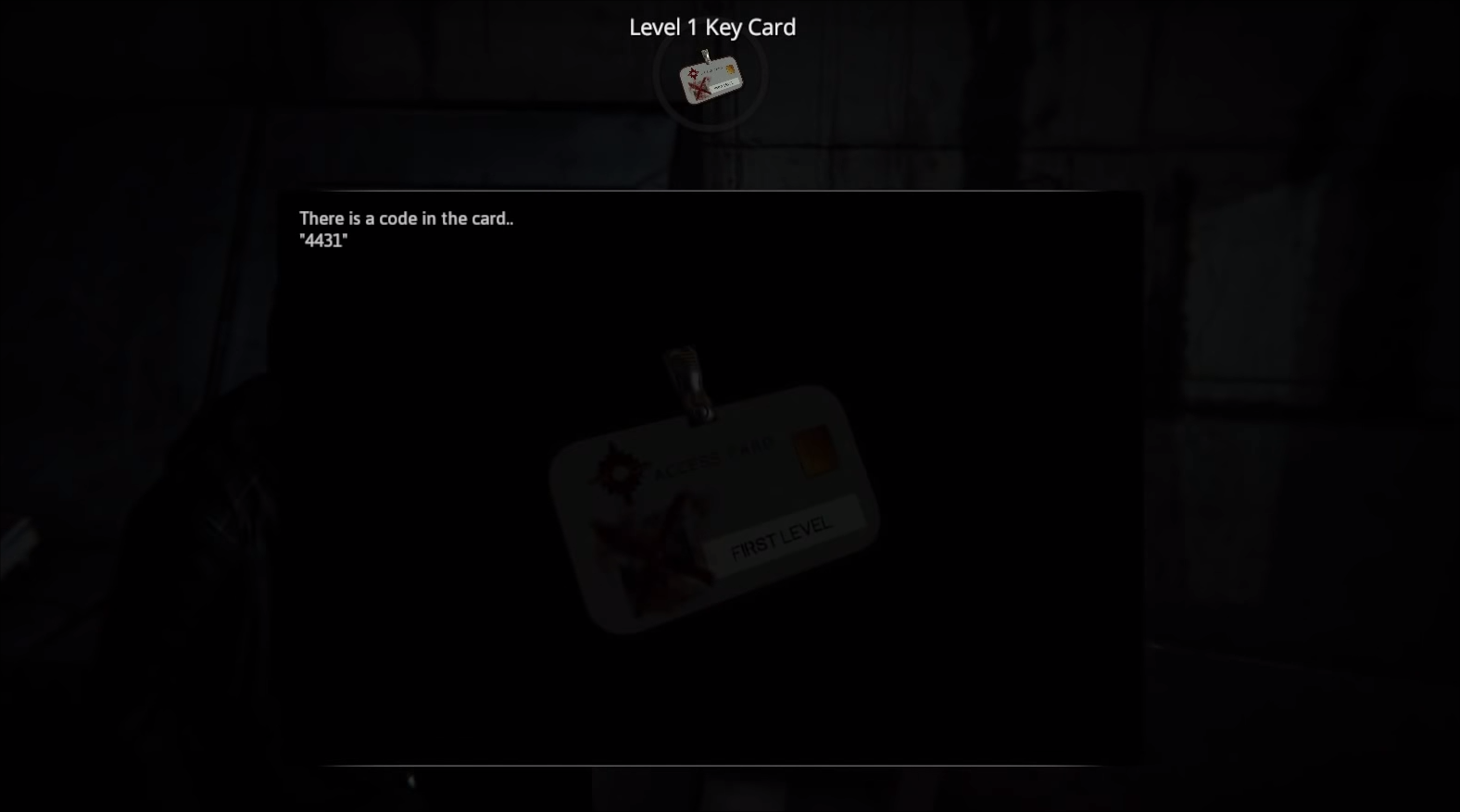 Exit the command center and make your way toward the open hangar where there’s a zombie just outside warming his hands by a burning barrel.

There’s some potassium iodine on a crate you can take. There’s also a tape recorder in the manager’s office, but it doesn’t have anything important to say. There’s also a shotgun on the wall.

A bunch of zombies will come into the hangar.

You can either attempt to fight them, or you can run away. It might be best to run away unless you’re certain you can kill them.

Exit the hangar area and go to your right. Proceed through the gate to the other area and then run past the zombies to the area where the large building is located. Just outside there’s a table with a detonator on it.

Head up the pathway through the busted gate with “54” on it and go inside the mining area where you first came out after taking the elevator, and head back to the elevator.

Take the elevator down to the locked laboratory door and insert the code: 4431

If you leave the door and go to the other door and then come back, the lab door should be open.

There are some crazy naked ladies who shriek and scream at you. Unfortunately you can’t use a long schlonged-whip to slap them to death but you can shoot them.

There’s a prisoner letter inside along with potassium iodate.

The letter contains the code to the surgical room. The code is: 3205

You’ll find some ammo for the pistol and shotgun inside, along with another crazy bald lady.

Take the vial near the dead body on the operating table and then exit the room.

After you get the vial, go back to the elevator, go to the mining area and up on the ramp there’s a love letter to Sylvia. Read it.

Exit the mining area , go outside and head through the busted open doors of hangar “54”.

Wait until you can get close enough and then use the shotgun on the flamethrower boss to put him down.

Gather up any additional resources within the hangar and then exit through the side fence. Make a left and run past the two dump trucks toward the gate. Go through the gate.

Run forward a bit and then make a right and then go through the doors to the airfield.

Make your way to the three hangars at the end of the airfield where the large hangars are located.

Go to the single-engine plane and go near the front of the plane and it will ask you if you want to use the C4. Click “Yes”.

Jacob will blow up the plane.

Go back inside the command center and interact with the fuse box by the side of the door. 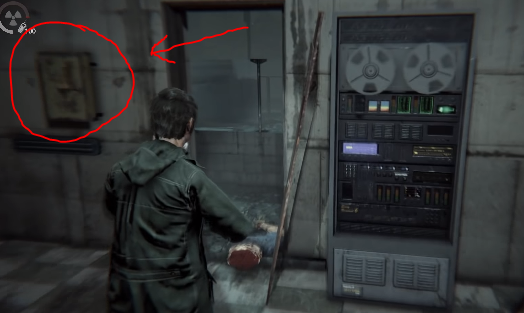 Kill or run away from the zombie and then make your way to the top of the radio tower.

With the power on, you’ll need to modify the wavelengths of the radio so that the lines align. Flip the switches to switch between radio frequencies, and use the knobs to align the frequencies so that they sync up. Once they all sync up, Claire will tell Jacob to make his way to the other side of the island through a corridor to the cemetery.