Square Enix’s Final Fantasy VIII Remastered is set to launch on September 3rd, 2019 for PC, PS4, Xbox One, and the Nintendo Switch. However, ahead of the game’s release, Dengeki Online published some new screenshots from the PS4 version of the remastered edition and people noticed that there have been some changes to the way the characters are designed, including the Siren, who is slightly more covered up in the new outing.

Twitter user Hiecchi showed a comparison between the original PSX version of Final Fantasy VIII and Final Fantasy VIII: Remastered on PS4, and you can see that Square Enix added a skirt to the Siren instead of leaving her in the barely-there C-cup she used to be wearing.

Because nobody is talking about this, let me share you some infos about Square Enix’s ReRelease for Final Fantasy 8
I think, everyone heard about their “ethic department” so lets skip my opinion and go straight to the Info

If you’re unable to view the tweet or see the images in the tweet, a comparison can be viewed below between the original version of the game and the remastered version. 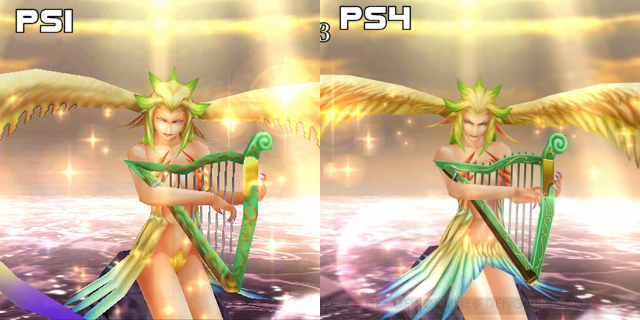 Basically they added more feathers around the pelvic region of the Siren to cover up her crotch.

It’s hard to tell if they did anything to her cleavage but it mostly looks the same.

Sankaku Complex pointed out that despite the Siren being censored, Shiva was not.

What’s really odd is that both Siren and Shiva are wearing C-cups over the crotch, yet Siren ended up getting censored.

Now it’s possible that in higher definition the crotch area of Siren looked more like pubic hair than a pelvis cover, and so they figured to add a few more feathers around that area to dress it up as a skirt instead of leaving it the same. If you notice, Shiva’s covering looks more like a crotch-plate rather just pelvic-region pubic hair, so perhaps that was the deciding factor?

We don’t really know and this was obviously a decision that came down from Square’s Ethics Department, which is a third-wheel content curator that makes censorship suggestions before ratings boards even see the game.

Additionally, it was pointed out that they covered up Rinoa’s cleavage.

As you can see in the comparison below, the cleavage is no longer as deep cut in the remastered version as it was in the original.

Now some people tried arguing that the cleavage wasn’t covered up and that it was just the higher resolution of the textures and higher polycount that altered the perception of the cleavage.

That is patently false.

If you pay close attention you’ll note that the cleavage in the PSX version of the game dips all the way down to lobules where the small ducts would be, just above the nipple. There’s a cutout so that the pectoralis minor is visible in the screenshot.

Notice that in the remastered edition, ZERO cleavage is on display and the shirt comes up above the pectoralis major so that there is no visibility of the skin that leads to the smaller ducts.

You can also clearly measure the amount of cleavage on display in both images by measuring the distance between the bottom part of her necklace to the lowest part of her shirt’s placket and it’s quite obvious that censorship is being employed.

Also note that the PSX version of the image is smaller yet has a larger gap between the necklace and the shirt’s neckline compared to the PS4 version, with a four pixel difference between the gaps in each image. This means that if the images were the same size, the gaps would be even larger. Raising the texture resolution doesn’t magically move pixels up; the artists purposefully shrunk the distance between the neckline and the necklace with the new shirt texture.

The really sad part about it is that this is likely going to be applied to all versions of the game, across PC, PS4, Xbox One and Nintendo Switch. The only hope gamers will have for experiencing the original art in the remastered edition is via PC mods.

(Thanks for the news tips korat, jigsy, and msoltyspl)