Attaching Nine Inch Nails’ “Head Like A Hole” to a near two minute trailer featuring the campaign mode of Gears 5 has done little to impress any gamer out there who was skeptical about the title. Fanboys are probably head-over-heels for the social engineering experiment, but no one ever accused a fanboy of being smart.

Anyway, the trailer features the general gist of the story behind Gears 5, where Kait Diaz, the new protagonist in the game – which by the way makes zero sense given that no one cares about Kait – ends up going on a journey of self-discovery (yes, really) in order to understand her ties to the Swarm and how it will impact Sera.

She acquires help from Marcus, J.D., Cole Train, and Dale as they attempt to fight back against a new breed of enemy. You can check out the trailer below.

Now when I tried warning people about the feminist ties this game had to all the usual suspects, we were called “Right wing Kotaku” and having “gone off the deep end”.

However, people who use such denial are those who are mentally incapable of absorbing facts, and they’re so brainwashed by today’s Leftist media that they believe anyone who doesn’t agree with the brainwashing is crazy.

But further to the point, Gears 5 was converged from the start. It’s developed in part by a Facebook funded social engineering program called Women In Gaming.

Facebook’s initiative is about getting more women in games both behind the scenes and on the screen. This includes replacing men in employment roles and replacing men as lead characters in games. They’ve partnered with a number of indie outlets as well, including activist studios such as Mafia III’s developer, Hangar 13, who openly proclaimed that they would be using their activism to help shape and change the industry.

But if that’s not enough to convince you that the game – and the studio – are converged, take note that Rod Ferguson of The Coalition, openly stated that he was “striving for diversity” in Gears 5, because he claimed that “diversity just doesn’t happen”. 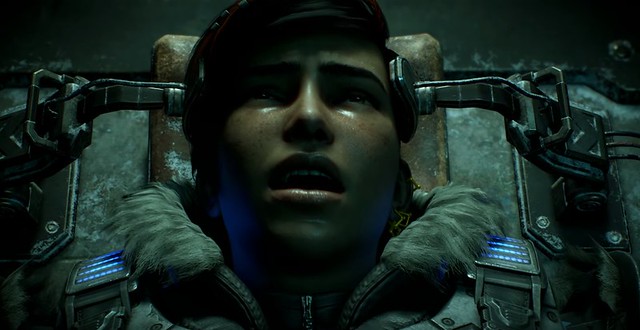 In plain English, what he’s saying is that instead of making the game the way it was intended, the game had characters and scenarios included purposefully to showcase and broadcast their diversity agenda, which included a disabled Muslim character.

The whole thing is wrapped in the Liberal’s “Progressive” politics, but a bunch of Centrists will attempt to dissuade you from acknowledging that because ultimately they want to trick people into supporting the brainwashing antics.

Heck, they even censored depictions of smoking in Gears 5 so as not to influence the kiddies, even though the game is made for people 17 and older.

But if you enjoy masculine media being overrun with butch, lesbian-looking, coffee-colored chicks, then be my guest and grab a copy of Gears 5 when the game drops on the Xbox One and on the Steam store for PC starting September 10th.