Cygames and Arc System Works’ Granblue Fantasy: Versus is the upcoming fighting game for the PS4, which instantly creates a sensation of disappointment and exasperation. Why? Because we know that Sony’s distorted morals that they mete out through the censorship policies will either prohibit Cygames and Arc System from pushing Granblue Fantasy: Versus as far is it could go, or resulted in them self-censoring to avoid any complications of getting the game up and out on Sony’s content-gimped console.

Nevertheless, for those of you who have been wanting to see more gameplay footage of the fantasy-themed fighting game sporting some slick anime chicks and gorgeous cel-shaded graphics, you can check out the GamesCom 2019 trailer for the upcoming title below from Marvelous Games.

The combat is fast and furious and plays out a lot like Arc System Works’ Guilty Gear games. In fact, many of you might notice that while Cygames created the character designs and story thematics, Arc System Works is the one who did the lighting, art production, the animations, and the effects.

This is why Granblue Fantasy: Versus looks just like the newer Guilty Gear games and Dragon Ball FighterZ.

They carried over their amazing tech that features custom character shaders to illuminate each character as if they came right out of an anime, and they make use of the animation pipeline that mirrors the limited frame-rates anime within a 60fps runtime so that characters look and move exactly like they came right off an animation cel, even though they’re actually rendered in full-fledged 3D. 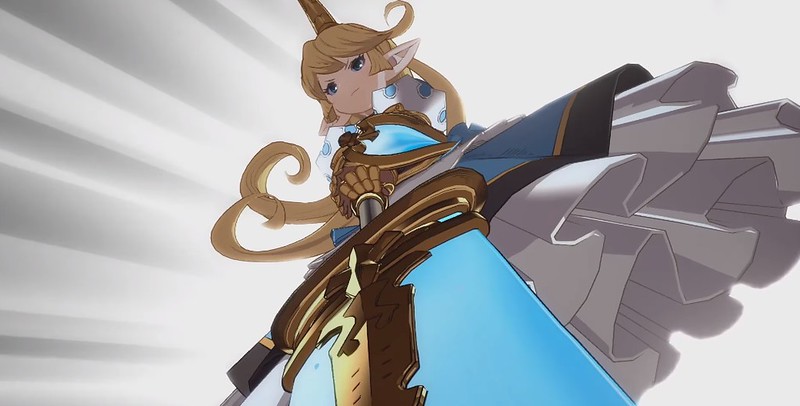 One thing I did notice is that the trailer seemed to showcase quite a few male characters in risque outfits but the females were nowhere near as disrobed. For instance, we had the trio of dandies at the 33 second mark, complete with bare backs on display, followed by Ladiva hopping into the frame and squatting and showcasing his manlet and exposed chest.

Out of all the characters available across the Granblue universe and the trailer’s only sex appeal was reserved for the male characters? Really?

Anyway, you can look for Granblue Fantasy: Versus to arrive exclusively on the PS4 in all its gimped glory.