Spiders and Focus Home Interactive released an overview trailer for Greedfall, which is due out on September 10th. The trailer covers the character creation process, where you can customize your character, choosing from male or female and from various skin colors and hair styles. Once you get done with their appearance, it’s time to enter into the game where you’ll be able to acquire and upgrade their skills, attributes, and talents.

The skill tree is broken down into three categories, and this applies to the way you’ll be able to engage in combat, using magic, stasis, or conventional weapons.

You can check out the near four minute video below to get a better idea of how the character progression is setup and what the actual combat is like in the game.

Your weapon options are quite varied, as well as how you build your character.

You can use one-handed or two-handed melee weapons, from rapiers to broadswords, both of which offer pros and cons during a fight. One-handed light weapons like rapiers allow you to parry and dodge easily, but provide less damage output and leaves you more open to receive damage. Two-handed swords are slower but far more powerful, cleaving enemies with just a couple of well placed strikes.

Alternatively you can use traps and bombs to waylay enemies from a distance, or rely on different types of ranged weapons such as crossbows, pistols, and rifles to take down humans, animals, and monsters alike.

Given the intensity of the combat, Spiders implemented a tactical pause option that allows you to pre-select what you do next, including prepping magic, using potions, or switching weapons.

What’s kind of cool about the game is that you can also modify the weapons and armor to better suit your play-style, assuming that a certain weapon comes close to offering what you want but maybe it’s not powerful enough, or the armor doesn’t afford you enough stamina or agility. These stats can be tweaked with various upgrades and customization options.

The game also allows you to use costumes and stealth to overcome odds.

For instance, you can use costumes to blend in with certain factions to get into a certain area. Alternatively, you can utilize thieving skills such as lockpicking to get through locked doors, or brandish explosives to blow holes through walls.

You can use diplomacy skills to interact with NPCs to get what you want, or rely on killing everybody in sight. 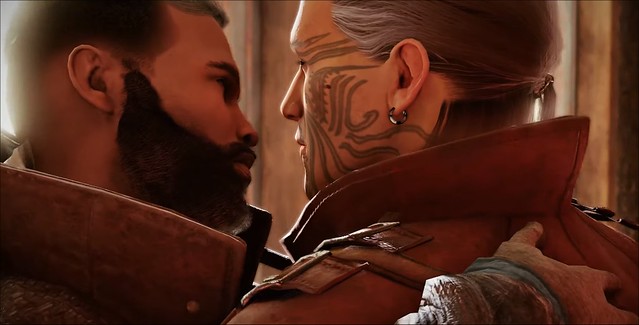 You’ll have up to three different companions you can take with you on your questing, and you can customize their look and skills along the way.

Like every other Left-wing game out there, Spiders makes it pretty obvious that there are gay relationships in the game.

It’s always funny (and disappointing) that developers put more time into gay relationships than making sure their game goes through quality assurance testing.

Uninformed and uneducated Centrists™ will retort “They’re just trying to make money from the LGBTQIA+ community!” to which I will respond… “There is no money to be made because they’re an infinitesimal consumer demographic that makes up less than 1% of spending in the industry!”

Centrists™ will scurry away after that.