This social unrest was borne from the news circulating the games media sphere that revealed that Voidpoint and 3D Realms kowtowed to ResetEra and permanently jettisoned any semblance of reputation they may have had in the core gaming sector. Not only did they apologize for saying that it was wrong for parents to transition young kids, though, they also donated $10,000 of YOUR money that you paid for Ion Fury to an LGBTQIA+ organization called the Trevor Project, and they announced they were censoring Ion Fury to remove insensitive content.

Real gamers were none too pleased with this development and began making their displeasure known in the forums. Well, the forum moderator, Samuel ”Lunick” Schultz, who has a link to his Twitter account, openly stated how much he hated gamers on said Twitter account.

This resulted in a user making a thread about Schultz’ commenting about how he hated gamers, which resulted in Schultz deleting the thread on the Steam forums, but not before screen-capping the thread and reiterating how much he hates gamers.

Yes, I Samuel Schultz, am closing threads about a 40 something pixel sprite that says ‘OGAY’ (wordplay on the brand Olay) because gamers can’t handle something being changed in their game for better. 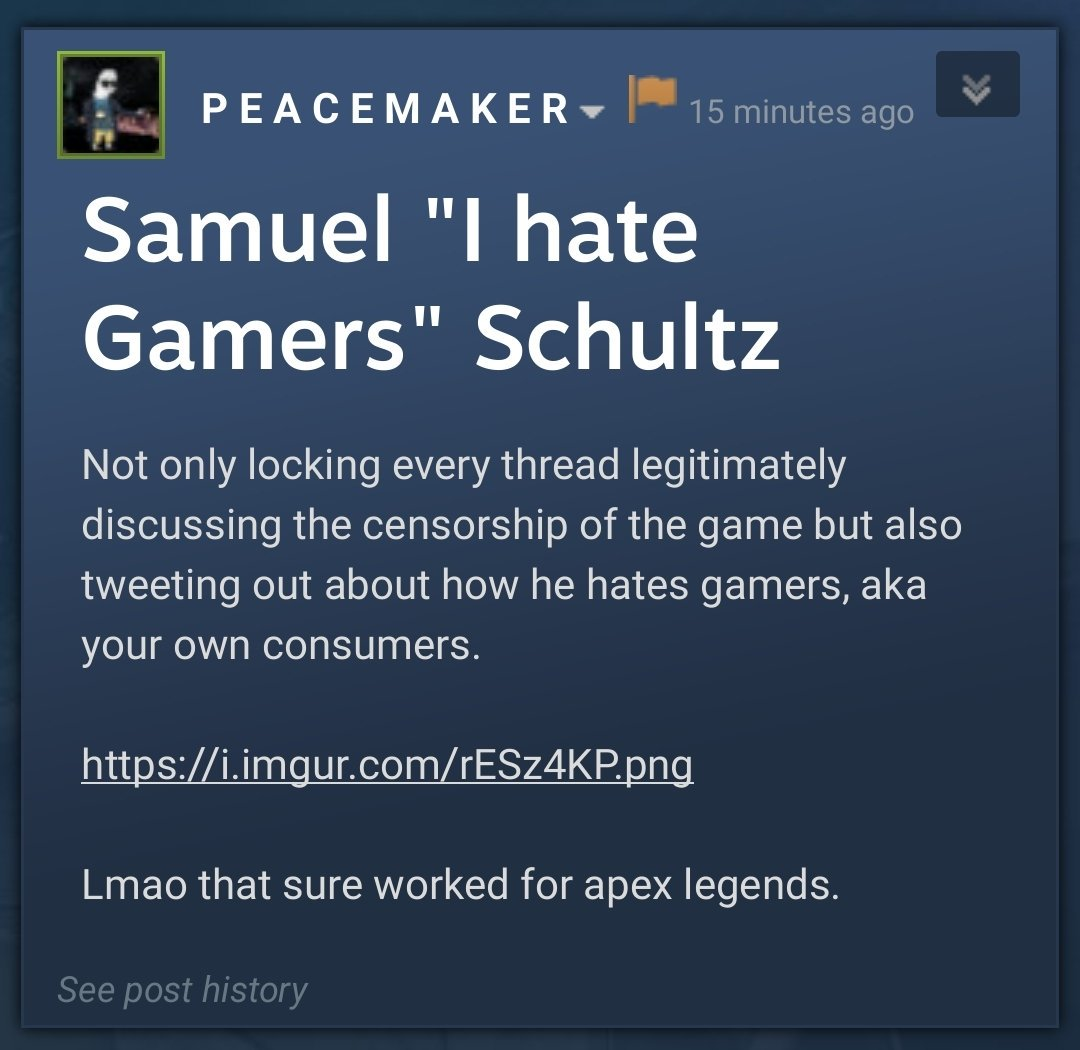 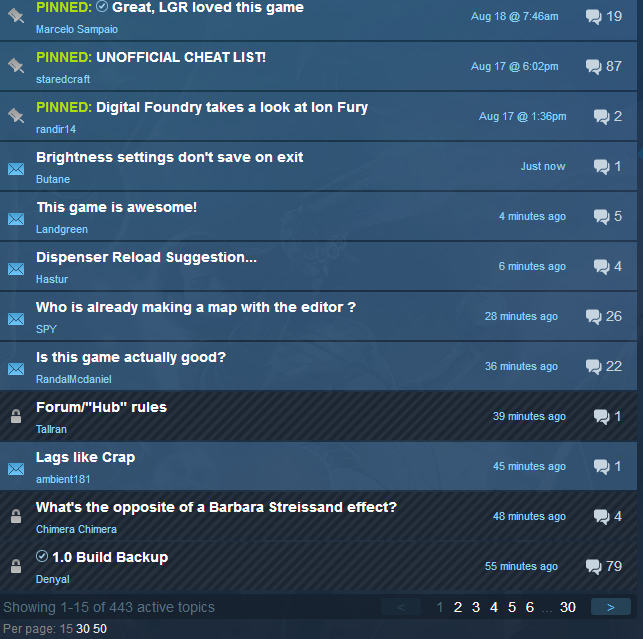 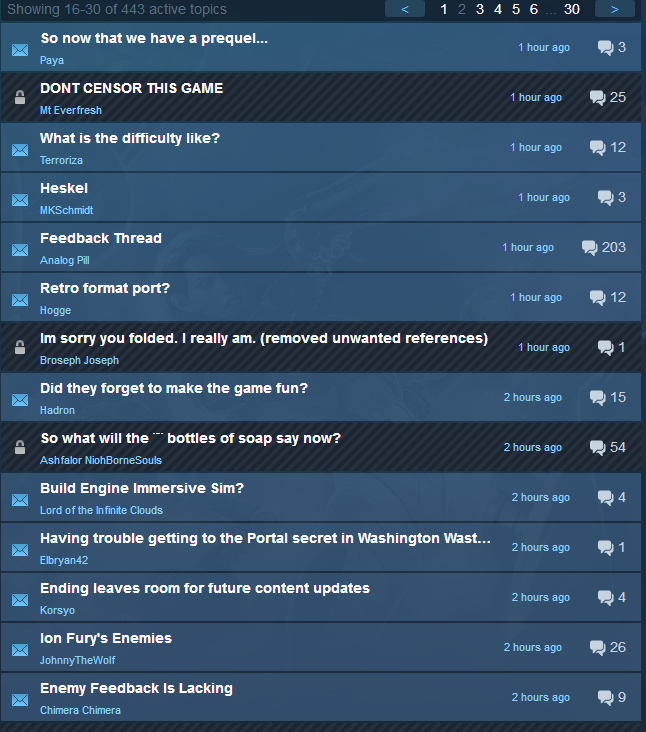 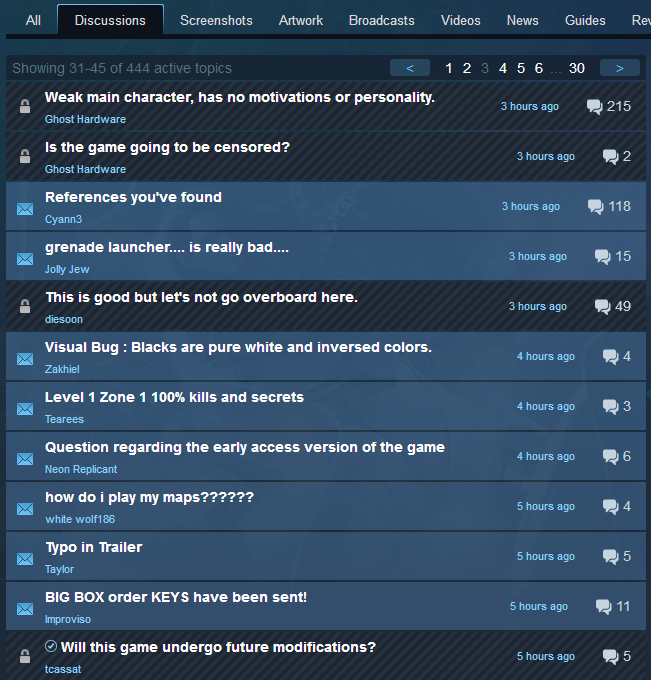 Users asking for the game not to be censored and trying to rally support against censorship were also banned from the forums, such as Chimera Chimera.

You can check the archive of the thread and note that the user is indeed banned. 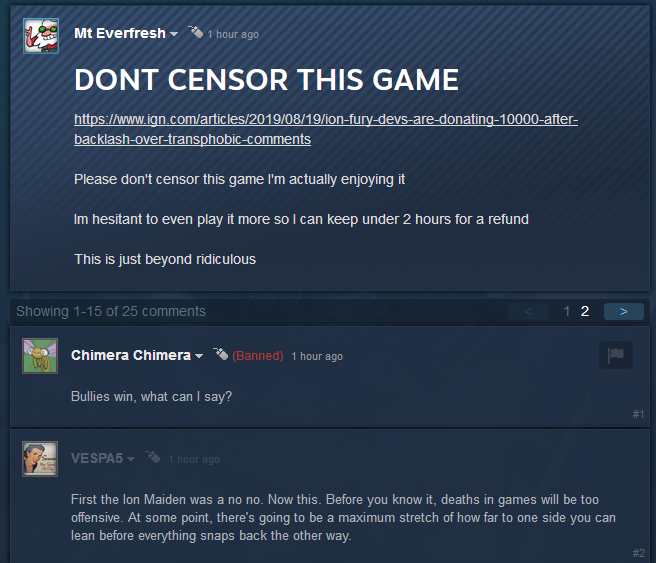 Well, it was revealed by Schultz that the reason he was banning users and locking threads was because he claimed that the topic of censorship regarding Ion Fury was “off topic”.

He responded to one of Chimera Chimera’s threads before banning him, saying the following…

Others also had their threads censored and were promptly banned for noting that they would be refunding the game or that they would no longer support Voidpoint due to their adherence to censorship.

I let them know on the Steam forums they lost me as a customer, they move pretty quick. My post was up for less than a minute before I got a permanent ban. pic.twitter.com/EpjAZmlXtc 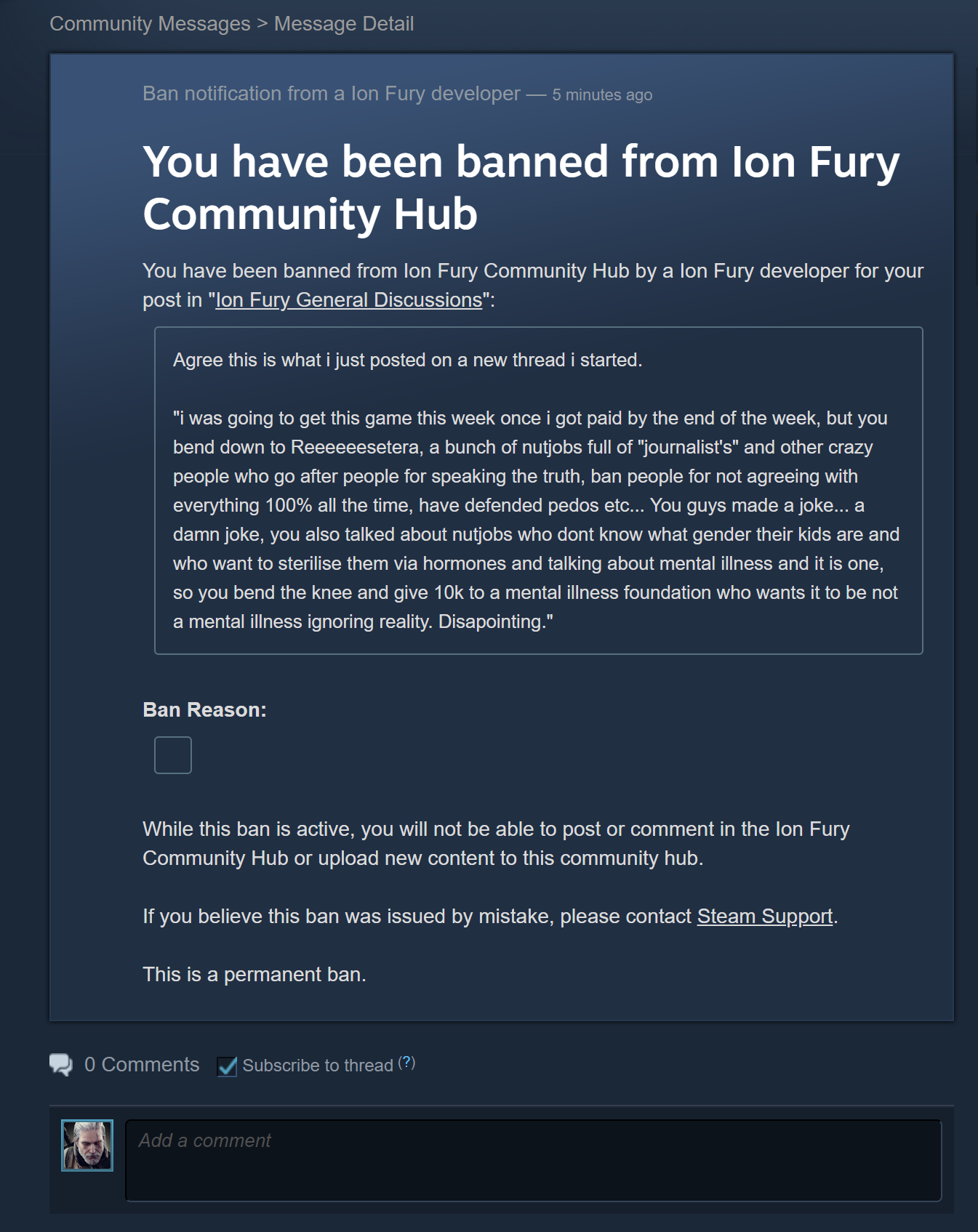 As pointed out in one of the ban notices, even mentioning ResetEra, or the forum’s alleged association with pedophilia, is completely prohibited by Voidpoint and 3D Realms in the Ion Fury thread. Users are being permanently banned for bringing up the forum. 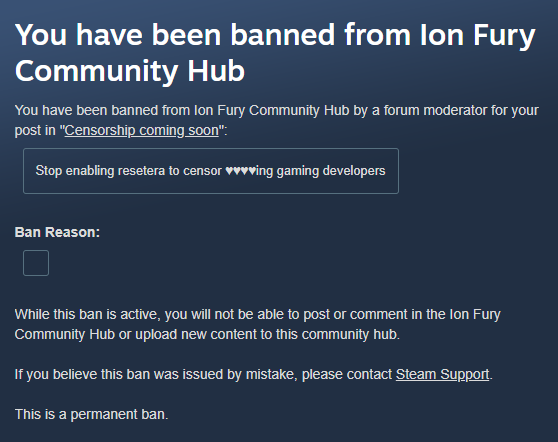 So pointing out corruption and a forum that is a hotbed of corruption is now off-limits by the very developers who had to censor their game because of said forum.

Well, would you look at this. “3D Realms” is LITERALLY ResetEra’s bitch: pic.twitter.com/mONR696N69

Schultz later made a separate thread, indicating that anyone even mentioning ResetEra will be warned and banned from participating in the Steam forums. 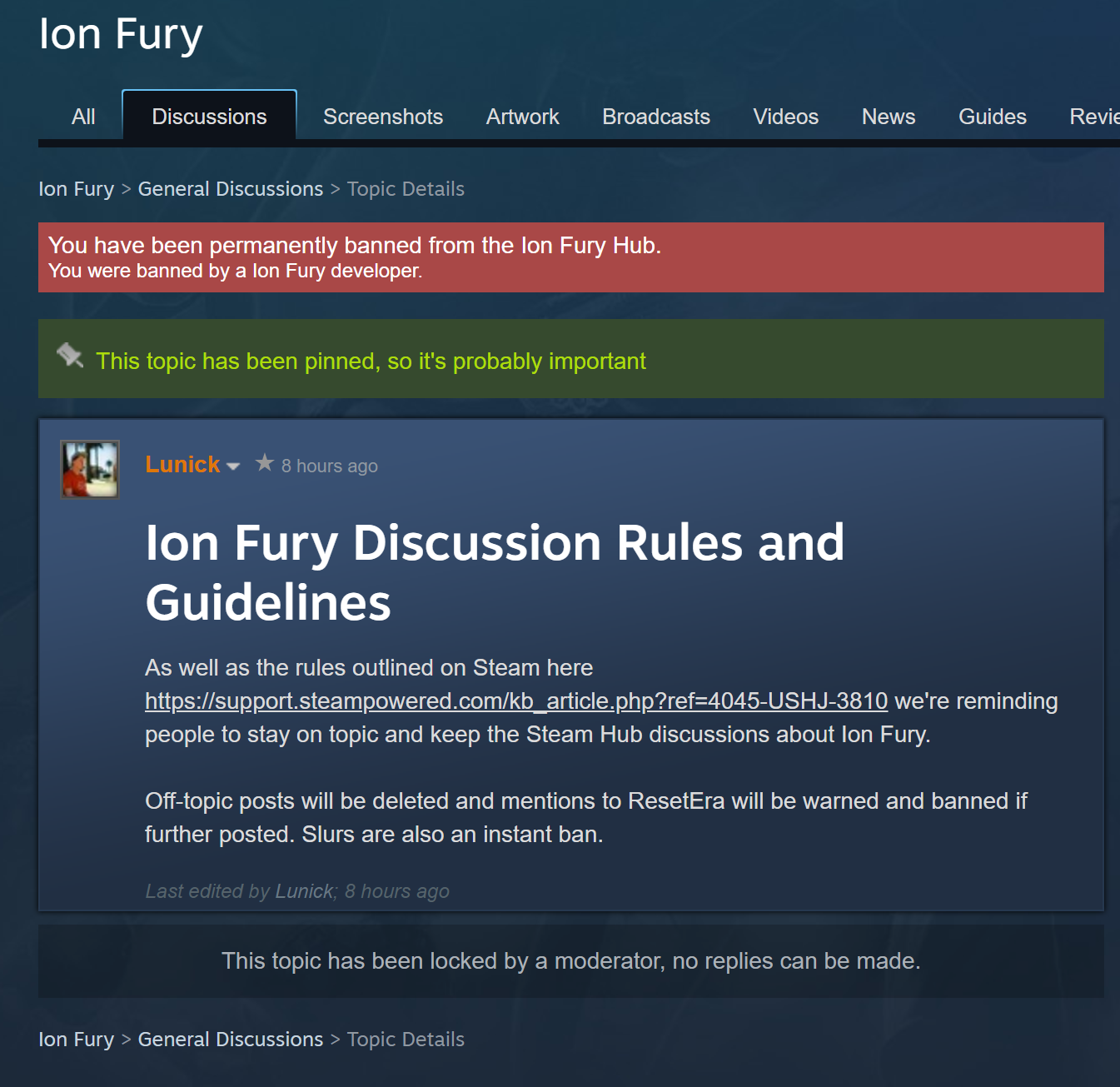 Obviously, when you start censoring dissent and trying to cover up the wrongdoing of a studio, people are going to be rightfully angry.

Since the forums are now on lockdown and censorship is running supreme on the Ion Fury forums, users decided to take out their frustrations in the review section, promptly changing their positive reviews into negative ones.

There are likely going to be some people trying to hand-wave away the negative reviews as being related to some other topic other than the censorship, but gamers have made it clear that they are rightfully giving the game a thumbs down because Voidpoint kowtowed to a den of debauchery and have ruined their reputation for the sake of virtue signaling, which garners zero returns in respect from people who aren’t mentally ill degenerates.

“Refunding the game after the publisher decided to censor the game and subjugate poor employees to sensitivity training. Get woke go broke guys.
(The game itself is great).”

“So yeah we know 3D Realms folded to the demands of the bullies over at resetera (the people who used to run the show in neogaf before finally getting purged for being toxic as hell, FYI). This means i have to unwishlist the game now because all of my interest just evaporated, just like that. You can absolutely depend that i am not alone in this.

“This haranguing of developers trying to make a living wont end until people stop folding to these forum idiots who have nothing better to do than try and tear down what others have built, and their ‘journalist’ friends hungry for rage clicks.

“To voidpoint, im sorry guys, you seem like cool dudes and 3DR probably went over your heads on this one, but a line has to be drawn somewhere. Im just sad about the whole thing. Imagine producing a genuinely good game and having its release window sullied like this. And for what?”

“Dev/publisher bent over for people that aren’t buying their game anyways. Refunded.”

While TheRockBoS kept it succinct and honest, calling out the developers for censoring a product unnecessarily at the whims of a hate forum…

“After hearing this game will be censored, I will be requesting a refund. I have a strict personal no-censorship policy concerning video games, to the point I have dropped all support of a certain console manufacturer.

“I am deeply disappointed in the developers and publishers for caving to people who not only do not, and will not ever purchase their product, but actively attack their consumer base.”

Expect steep suppression and censorship of the news that doesn’t paint Voidpoint as transphobic, and expect the media to continue to castigate anyone who doesn’t agree that Voidpoint should have censored Ion Fury.

If the media gets their way, then the censorship and suppression will keep up until people eventually forget about it. After Voidpoint has been converged with the Left-wing agenda, it will be business as usual with yet another developer having succumbed to the subversion of the Left’s brainwashing. With the media narrative in full swing, the disposition of Voidpoint’s fans will change into “Well, what they said was wrong and so yeah, it’s good they apologized and censored the hate speech”.

We’ve seen this time and time again, as people continue to give up their freedoms, relinquish their right to expression, and continue to bend the knee to the subversive elements of cancel-culture, which is intent on completely overthrowing the societal norms that keep a healthy civilization functioning.

Welcome to the future no one fought hard enough to change.

(Thanks for the news tip ForsakenEagle)