Dontnod Entertainment and Square Enix’s Life Is Strange 2: Episode 4 – Faith has finally released. The fourth part of the five part series is available for PC, PS4, and Xbox One, along with mobile devices. For gamers who picked up the Liberal-themed adventure title, there are gameplay walkthroughs available covering the choices and outcomes for Life Is Strange 2: Episode 4.

Technically the whole series should have been removed from Steam and other digital storefronts given the underage sex scene depicted in Episode 3, but since Left-leaning ideologues are given passes where no one else is allowed to tread, the series has stayed up and available on the various distributors with nary a sign of tumult.

Anyway, first up there’s an hour and a half gameplay walkthrough available from YouTuber MKIceandFire, which you can check out below.

The episode starts with a recap of the biggest choices you made throughout the series.

When you finally get into the game, Sean will wake up in the hospital with a bandaged eye.

You can look at the TV, the FBI calling card, the sketchbook, and the leftovers.

You can also read Cassidy’s letter, Claire and Stephen’s letter, as well as Chris’ letter.

When you get done looking at stuff, look at the button on the bed and press it to call the nurse.

After you press the button a black man-nurse will enter into the room. 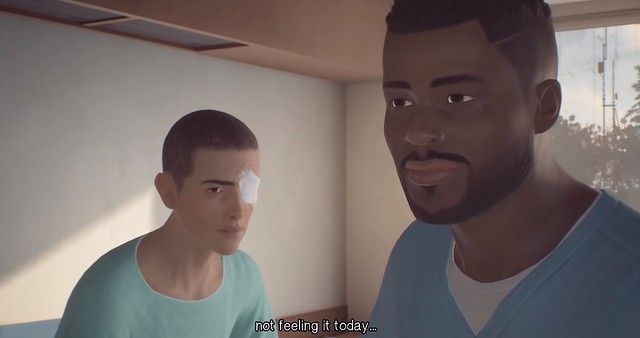 Joey will walk you through a series of optical tests, which includes using the right analog to follow the light, as well as a depth perception test where you’ll need to align the pen with Joey’s pen.

When the officer comes to talk to Sean, you’ll be able to choose to say that Sean is “Innocent until proven guilty”, you can be indignant or you can tell her that he “didn’t kill anyone”.

She’ll then ask about the robbery… you can either take the blame, blame Finn, or say that everyone was involved. 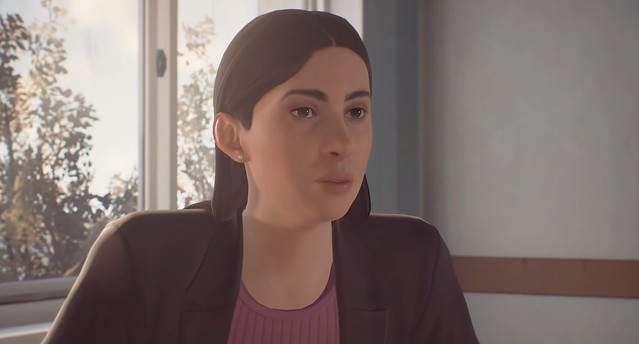 After Agent Flores leaves, Joey will re-enter into the room and you can talk about the discussion Sean had with Flores.

You can also either be positive or negative about Sean’s conversation with Joey.

After Joey leaves you can take the the pen on the foot tray by the bed. Underneath the towel you’ll find Sean’s old sketchbook.

Read the sketchbook and you’ll find a note from Jake saying that Daniel is with him.

Scroll through the sketchbook until you find Jacob’s home in Haven Point, Nevada.

Close the curtains, inspect the hall through the window, and then go over to the chair and take the blankets/towels.

Go over to the bed and an option to make a fake body will appear.

Create the fake body; go into the bathroom area and there’s a pipe under the sink. You can take the pipe.

Use the pipe in the window to crank it open. 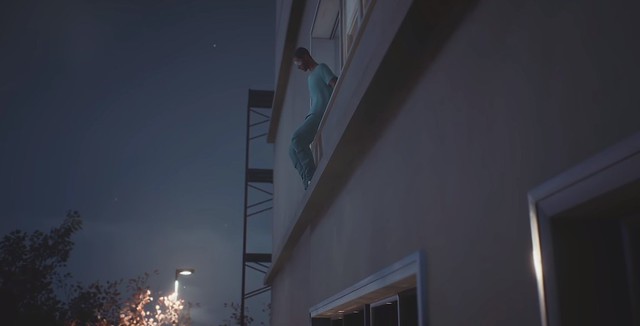 Exit the room through the window and you can either choose to keep going or go back inside.

Shimmy across the ledge and in through the construction room.

Go across the hall into the staff room to get Sean’s gear.

As Sean makes his way down the scaffold after getting his stuff, he’ll encounter Finn in one of the rooms. You’ll have the option of either escaping or talking to Finn.

Finn will apologize for getting Sean and Daniel into that mess. You can either blame him or forgive him. You’ll also have the option of telling Finn where Daniel is, or keeping it a secret. 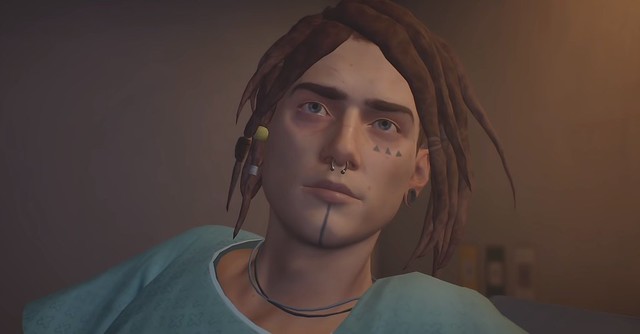 There’s a completely alternate way to escape, which includes using the nurse call button on the bed and this will alert Joey, who will come to Sean’s room.

Sean will explain to Joey that he’s going to escape, which presents Sean with the option to either hit Joey over the head with the pipe or refuse.

If you refuse, then you’ll have to use the first route you used before, otherwise you can escape through the door past the guard if you choose to hit Joey with the pipe.

The alternate routes are explored in the playthrough by RabidretrospectGames.

After the intro, you’ll be able to examine the contents of the car.

Look through the backpack to get the medical gear out of the bag and then use it to clean Sean’s missing eye.

When you get done with the eye, you can then have Sean go to sleep.

During the dream you can tell Sean’s dead dad he’s the coolest or you can just say “thanks”.

Sean’s dad will then ask about Jenn.

Eventually the racist will tell Sean to teach him Spanish and to get out of his country. You’ll have the choice to sing and dance for the racist or beg to be let go. Your final choice is to sing for the racist or get beat up, because in the eyes of Liberals every straight white male is racist, further proving that Liberals are the most racist people on the planet.

After getting away from the Liberal’s interpretation of a straight, white, American male, Sean will have to hoof it the rest of the way on foot.

Trek towards the billboard.

While Sean rests, you can open the backpack and use the sketchbook to draw. 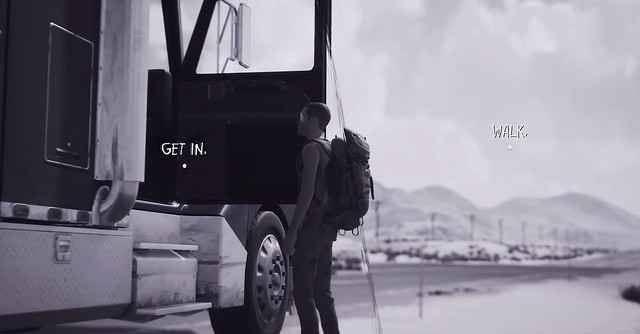 After you finish sketching, keep walking and eventually a trucker will come by and offer Sean a ride.

You’ll have a choice of getting into the truck or keep walking.

If you choose to get in Anton will offer Sean a sandwich, you can accept or refuse.

Surprisingly, the trucker is normal despite acting like a body-harvesting child molester.

He’ll also drop Sean off at a church in Haven Point.

When you get to the church, Sean will be asked why he’s there.

Inside the church you can choose to give a donation. You’ll also find that the church has turned Daniel in a symbol of piety.

You can wash up inside the bathroom and then attempt to go inside the main room.

Head upstairs to overlook the sermon.

After a lengthy cinematic, you can talk to the little girl about the church and Daniel.

After talking with Daniel, you’ll be able to talk to Reverend Elizabeth – she’ll ask Sean about his plans. You can either choose to say that it’s possible to stay a while, or that Sean and Daniel are leaving to Mexico.

Like typical Liberal developers, they portray the Christians as crazy lunatics, who misrepresent Sean and throw him out of the church.

Once again, they portray the straight, white Christian male as a violent, racist. After Sean gets thrown out of the church, you can choose to either stay down or get up. If you choose to get up, the Reverend’s henchman will beat up Sean and draw a gun, threatening to kill him if he doesn’t leave.

The propaganda is off the charts in this episode. 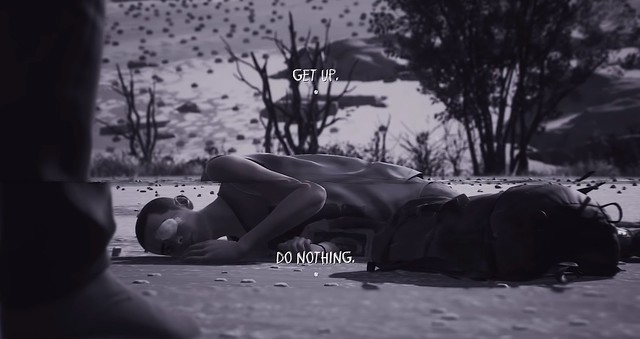 She explains that she received a letter from Jacob and that she came to help Sean and Daniel.

After taking a shower and getting dressed, look in the mirror, examine Karen’s stuff, and then exit the bathroom.

Examine more of Karen’s stuff by looking in the bag.

You can examine the phone, the sweater, and the backpack.

There’s a tablet on the ground you can access as well. The code is on the tablet, which is: 112708

After examining the contents of the tablet, use the phone to call Jacob.

Open the drawer. There’s a casino token inside. Take it.

When you get done rummaging through the room, look at the bed and click on it to wait for Karen to return.

You’ll be able to ask Karen why she bailed.

Anyway, she keeps saying she “didn’t have a choice”.

You can rightfully tell that selfish she-dog you don’t care.

An answer in the form of an open-palm moving at the speed of pimp-slap should have been a choice. 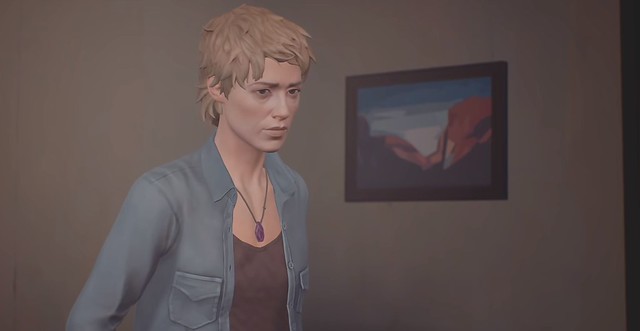 Anyway, Sean and Karen will continue to talk.

You can ask Karen additional questions.

At the end of the conversation you can either ask for a smoke, go back inside or say nothing.

In the next segment when meeting with Jacob, you can accuse him of taking money or thank him for taking care of Daniel.

The next segment is a pseudo-stealth segment where you have to attempt to get into the church without attracting attention.

Make your way to the back of the church and there’s a guest house.

The door where the files for Sarah Lee are located is locked. Head into the bedroom and in the top right hand drawer, there’s a key. Take it.

Head into Daniel’s room and you can examine the contents. You can also take Daniel’s sweater from inside the closet, along with Esteban’s blanket.

When you get done examining the room use the key from the drawer on Lisbeth’s office. 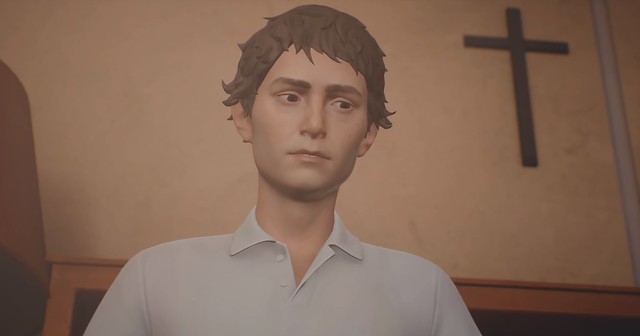 More propaganda is revealed when it turns out Jacob is gay.

The church along with Jacob’s parents put him through conversion therapy to cure the gay.

After Jacob confesses his gayness, the violent Christian man will return and you’ll need to hide either in the closet or the cabinet.

Obviously, Jacob can’t go back in the closet.

Karen will suggest to make a distraction, you can either tell her okay or warn her that it’s dangerous. If you tell her it’s okay, Karen will set a mill on fire and it will draw the dangerous Christian man away.

Once he leaves, Jacob and Sean can leave the house.

After you enter into the church, a lengthy cinematic sequence will play where Karen and Sean will attempt to bring Daniel back with them.

During the sequence where Sean needs to convince Daniel, you can either tell him to “have faith in yourself” or that Lisbeth is “not a real Christian”.

Later you’ll be able to choose to tell Daniel that the community is toxic or that it’s no place for daniel.

Finally, Sean will have the option of telling Daniel is “smarter than this” or “what would day say?”

Sean will get beat down by Nicholas repeatedly.

Keep tapping ‘A’ to get up.

The final choice will involve threatening Lisbeth to get out of the way or have Daniel to use his powers to move her out of the way and blast the doors open.

If you choose to threaten Lisbeth, she will refuse to move. You either have the choice of shooting and killing her or having Daniel move her out of the way.

The episode ends with the group escaping from the church and riding off into the sunset.