Team Ninja knows the way to a gamer’s heart. They recently announced that a free update for Marvel Ultimate Alliance 3 on the the Nintendo Switch is coming on August 30th. The update will bring some awesome new features, including two new playable characters and three new costumes for the characters already on the roster, one of which includes the classic 1990’s black leotard for Captain Marvel.

The news was spotted by Siliconera based on a quick clip from a Marvel Minute update posted up over on the Marvel Entertainment YouTube channel.

At the 1:20 mark in the short news compilation, it’s revealed that gamers will be able to access lots of new content starting August 30th, 2019 in a free update for Marvel Ultimate Alliance 3.

The two new playable characters include Cyclops and Colossus. I’m not sure why they weren’t playable from the start given that they play a decent role in the game’s story at one point and it would seem like they should have been part of the roster after completing the story segment at Xavier’s mansion. However, Team Ninja decided to make gamers belt out some sweat in the patience room before being able to get their hands on the two X-Men.

In addition to Cyclops and Colossus being made playable characters, they’re also adding three costumes. The black symbiote outfit for Spider-Man, Planet Hulk’s gladiator outfit, and the sexy, hip-hugging, curvaceous leotard for Captain Marvel that hearkens back to her super-hero days from the 1990s. 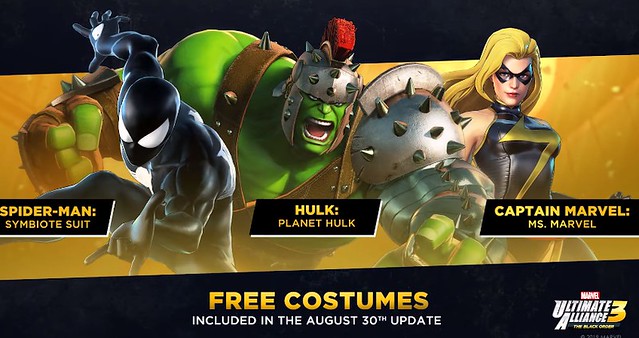 I’m shocked Marvel let them add that outfit to the game, but then again maybe they actually want them to make money, a concept lost on many other woke-ridden companies.

It’s also funny that Team Ninja seems to know how to outfit the women in Marvel Ultimate Alliance 3 with sexually attractive attire but they can’t seem to get the outfits right in Dead or Alive 6. What happened there?

Anyway, if you own a copy of the four-player, cooperative beat-’em-up title, then you can look forward to getting your hands on the free update come August 30th.

(Thanks for the news tip FlutterDash)