While no proof has been provided that Alec Holowka has committed any kind of sexual misconduct, allegations from Zoe Quinn have been taken at face value, and Infinite Fall, the studio behind Night In The Woods, decided to fire Holowka after the allegations came to light.

It started with tweets from Quinn alleging that Holowka had assaulted her early into her game design “career”, according to a report from Cog Connected. Holowka didn’t respond to the allegations, but Quinn managed to drum up enough chatter and spread around the claims that Holowka had abused others that the studio behind Night In The Woods opted to fire Holowka. On August 28th, 2019, across multiple tweets, Infinite Fall stated…

“This week, allegations of past abuse have come to light regarding Alec Holowka, who was coder, composer, and co-designer on Night In The Woods. We take such allegations seriously as a team. As a result and after some agonizing consideration, we are cutting ties with Alec.

“We are cancelling a current project and postponing the Limited Run physical release. The iOS port is being handled by an outside company and supervised by Finji and will remain in development.

“We’ve received a lot of emails and messages in the past few days, often very hurt and angry. That’s also how we feel. This has been very, very tough.

“I should say that I’m Scott. Hello. I run this account. I was the artist, lead animator, co-designer, co-writer, and the guy who wrote almost all of that dialogue in the game. Bethany’s here too, she was co-writer and researcher.

“Much of Night In The Woods is pulled pretty directly from our lives. Bethany is from a tiny valley in central PA. I’ve lived out here in Western PA for about 20 years. The characters are us, and people we’ve known. The places are ones we know.

“Thousands of people have connected with Night In The Woods in a very personal way. We can’t tell you how to feel about any of this. Whatever you’re feeling is valid. Your experience with art is yours. What it means to you is yours, regardless of anything else.

“Going forward, Night In The Woods will be handled by Bethany and I. We’re not sure what that all means yet. This stuff takes time.

“Thanks for your support over the years. We’re sorry to even have to say any of this. That’s all I can say at the moment. Thank you for your patience. “

No police reports were filed, no attorneys were involved, no evidence was provided.

As reported by Newsweek, this all stems from a Twitter thread published by Zoe Quinn on August 27th, 2019. So it’s all hearsay for now, and Holowka’s career seems to be finished because of it.

Keep in mind that Wolf Wozniak alleged that Zoe Quinn had harassed him at a wedding, and he was promptly ridiculed by people like Phil Fish for making such a claim. The tweets are now gone, but the GG Wiki still has the reference, which was pulled from Know Your Meme. 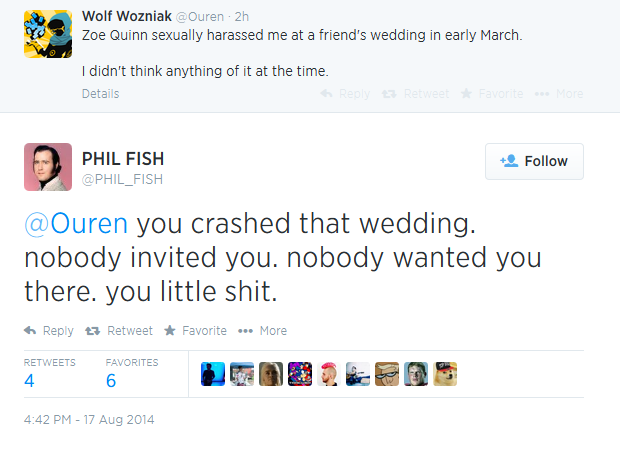 Of course, the developers of the hipster game Night In The Woods adopt the whole “listen and believe” narrative, so it meant that regardless of whether the accusations are true or not, Holowka is guilty until proven innocent in their eyes.

(Thanks for the news tip CZ)