Hello Games released the trailer for the next major update for No Man’s Sky called “Beyond”. The trailer gives gamers a look at all of the new content scheduled to arrive in the game starting August 14th, 2019 for home consoles and PC.

The trailer clocks in at just under two minutes, featuring a look at all the brand new upgrades and updates that Hello Games have implemented into No Man’s Sky, which released as a scam for $60 but eventually evolved over the years into an impressive, space-faring survival game with multiplayer elements and base building… basically everything that was promised at launch but wasn’t delivered until three years later. Anyway, you can check out the trailer below.

So there are a couple of really interesting things about the trailer.

I remember when the game was first being previewed and everyone was asking if your character was actually there, and Sean Murray kept trying to dodge the question because player-characters weren’t properly represented in the game world at the time. However, now we can see that your player-character can be visible in the game with a chase cam. It’s not the smoothest chase-cam in the world, but it’s serviceable for being able to look around your character instead of being trapped in the claustrophobia of a first-person perspective.

Additionally, and most notably, are the alien mounts. You can now capture and enslave aliens from across the great expanse of No Man’s Sky not-so-infinite universe and make them your own. You can ride them, berate, and treat them like the digital trash that they are. 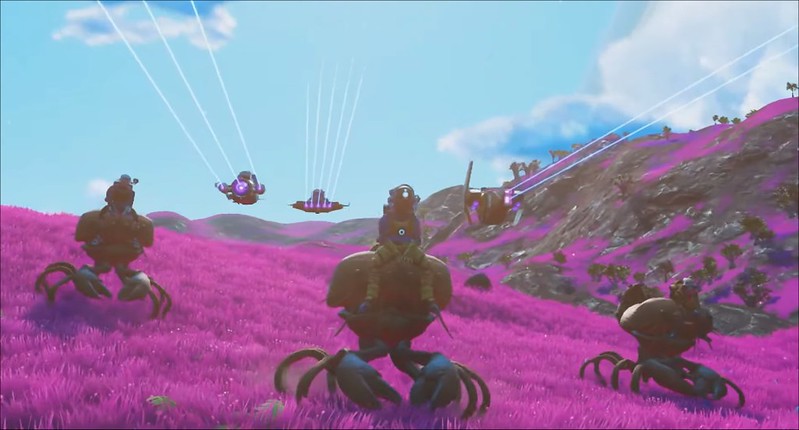 The trailer also reveals that planetary cores can now be reached by going through service tunnels. What’s inside the planet? Looks like hub stations that allow you to interact with other players and NPCs.

We also see the whole multiplayer aspect in full bloom, with players launching and landing, riding aliens, shooting at violent natives, and taming the planets through man’s natural inclination to colonize the savage lands of sprawled throughout the great expanse of unexplored space.

It’s a real shame there were no sexy ladies in the trailer, though.

Anyway, you can look for No Man’s Sky: Beyond to go live for Xbox One, PS4, and PC on August 14th.