Arc System Works rolled out a new two and a half minute trailer for River City Girls ahead of the release on September 5th for Xbox One, PlayStation 4, and Nintendo Switch. The trailer covers Wayforward’s take on the Kunio-kun saga.

The new trailer features an overview of the gameplay, some of the moves you’ll be able to unlock by purchasing them from the skill shops scattered throughout the levels, and some of the enemies that you’ll encounter and even recruit as support characters to help you clear out the screen when you’re in a bind.

You can check out the new trailer below, which was posted up on the Arc System Works Japanese YouTube channel.

The English voice acting isn’t the most satisfying, but so long as you can keep it tuned in to the Japanese voiceovers, I think everything will be a-okay.

So right down to it, you play as Kyoko and Misako, on the hunt for their presumably captured boyfriends. They have to fight through a town full of baddies to recover their beaten beaus from the bedizens occupying the town.

This requires utilizing fisticuffs to take down a handful of bosses and utilizing whatever means possible to do so. This includes being able to recruit NPCs as allies and call them into battle to help take out some troublesome foes, not unlike what you could do in the old Shodai game on the SNES. 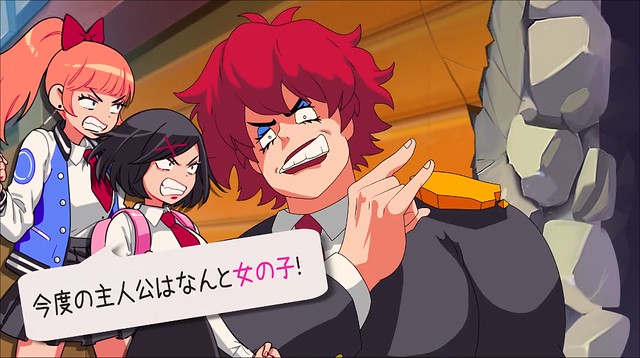 Beyond that you’re able to acquire items and resources from stores scattered throughout town, not unlike past games in the Nekketsu series.

Each of the girls have their own set of moves that you can equip, to change the way they attack.

Additionally, you can acquire and equip a rather risque set of accessories for the girls to help give them boosts and bonuses during combat. Eating certain foods can also help bolster your fighting prowess as well.

Another nice little touch is the addition of Jimmy and Billy Lee from Double Dragon, appearing as the technique masters at the shop. 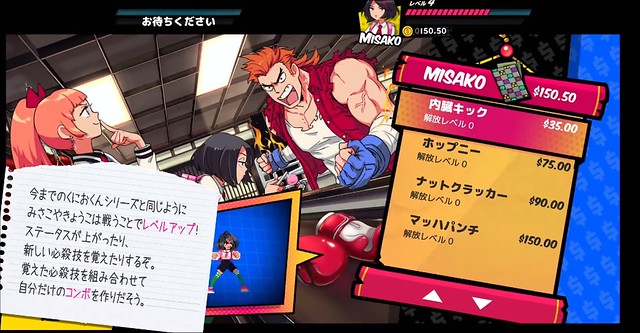 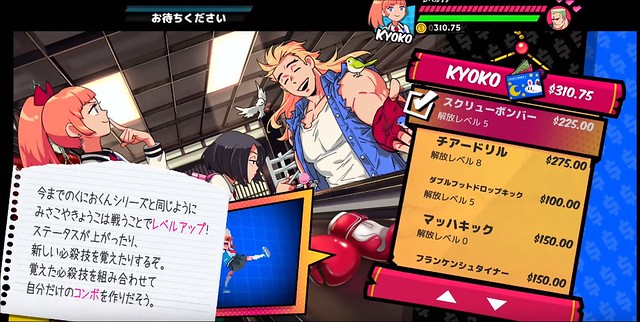 I’m sort of looking forward to this game.

And don’t worry, you still get to play as Kunio and Riki; they’re unlockable characters.

My only reservation is that a lot of games launch broken these days, and I was hoping to get this on cartridge for the Switch. But if it launches broken and I get the cartridge version, and the game industry crashes, then I’m stuck with a launch version that’s broke out of the box. So hopefully it launches right proper and without requiring any day-one patches.

If you were interested in a physical copy like moi, you can check out the pre-orders available over on Play-Asia’s store.

For more information on the game, you can visit the official Kunio Kun website. You can look for River City Girls to drop on Steam for PC, on Xbox One, on PS4, and for the Nintendo Switch starting September 5th, 2019.