Nutaku managed to secure the visual novel, Sakura Apprentice, selling the digital game for $4.99 over on the adult storefront. The game follows the male protagonist, Riven, a warrior-to-be who takes up tutelage under the busty knight, Freyja.

Riven and Freyja proceed to go into training, with Riven attempting to evolve his skills to become a professional knight. Along the way hijinks and opportunities to explore lecherous moments arise, especially given that Freyja’s training centers around maximizing their sexual energy, pushing Riven to his absolute limits both physically and sexually. 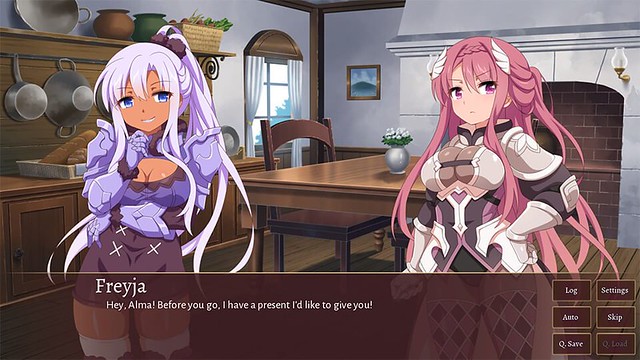 Along the way Freyja and Riven will encounter other villains, rivals, and sexy compatriots along the way.

Much like other Winged Cloud projects with art headed up Wanaca, the girls look gorgeous, the colors are crisp, and the lines are enticing.

Also, given that this is Nutaku and not Steam, it means that you can play Sakura Apprentice completely uncensored without needing any off-site patches to access all the naughty-time content.

The visual novel is rather compact at only 174MB, very much matching its cheap price. It joins a number of other Sakura games made by Winged Cloud, which typically have many of the same plots just set in different time zones or settings, ranging from medieval fantasy to sci-fi space to otaku culture and everything else in between. They’re derivative but entertaining enough for the people who enjoy visual novels with just enough story to make the H-scenes more than enticing.

If you wanted to add the visual novel to your stash you can do so right now by heading on over to the Nutaku store page. The visual novel is available for just $4.99 if you were looking to get a Winged Cloud fix, and the best part about it is that you don’t have to worry about it being banned and ending up on the Waifu Holocaust list.