SNK dropped some big news at this year’s EVO tournament. They rolled out a new trailer featuring the upcoming DLC for Samurai Shodown, which includes the highly requested Mina Majikina, who made her debut during the less-than-stellar Samurai Shodown V. However, Mina has easily become one of the most popular characters in the series due to her sexy outfit and stunning looks.

The tanned boob monster topped all of the community polls, as indicated over on the MMCafe board, where she stood chest and shoulders above the rest. Unlike Western game developers who purposefully go out of their way to spite fans, SNK did the opposite by giving their fans exactly what they wanted. You can check out the trailer below, captured from the EVO stream courtesy of Rikukey2.

The trailer features an outline for the next set of DLC characters set to arrive in Samurai Shodown, including Rimururu and Basara, the latter of whom will launch in October.

In November gamers will have access to Kazuki Kazama, the fiery fighter with a burning desire for justice. In December the larger-than-life Wan-Fu will join the cast, while Shizumaru Hisame will be a free DLC character for all regions in September, as a thank you for making Samurai Shodown a success.

All of this gets started with Rimururu in August, who will be available for owners of the game on PS4 and Xbox One. You can see what she’s like in action via an off-screen video capture provided by ファミ通TUBE from the EVO showfloor.

The four minute video gives you a good idea of what to expect from the upcoming waifu-tier character.

However, the real news is that after lots of complaints, lots of begging, and lots of requests, SNK has heard all of the vociferous yells for Mina.

Mina will lead the second season of DLC set to get underway in 2020. 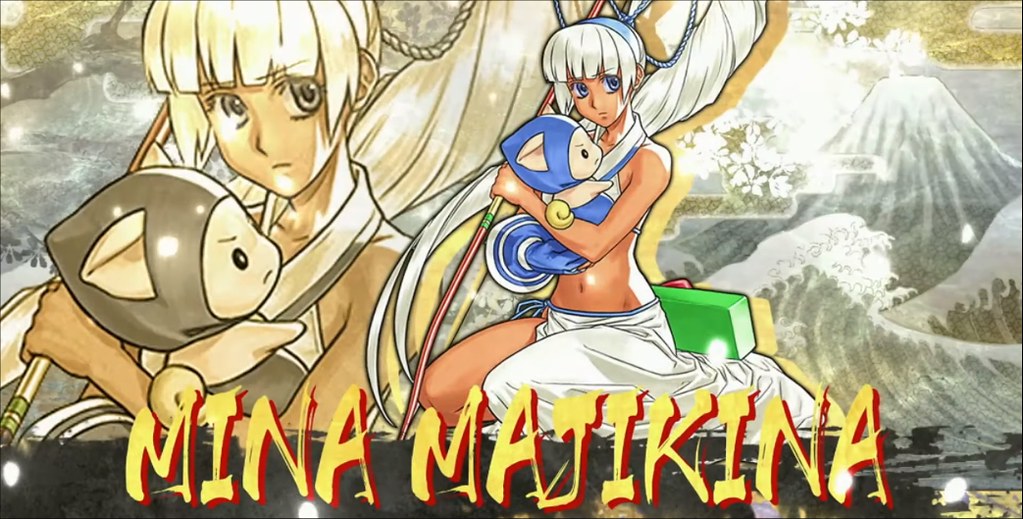 In addition to revealing that Mina would be leading the second set of characters in the next season of DLC, SNK also briefly revealed that King of Fighters XV is currently in development.

That’s a nice little addition to the trailer, even though we all knew a new King of Fighters was in development.

While we don’t know what platforms it will be available for, I’m pretty sure that the PC, PS4, and Xbox One are a given (unless it arrives late and ends up on the Xbox Scarlet or PS5). If it’s for the next-gen systems then it likely won’t be available for the Switch, but if it’s for the current gen systems then don’t be surprised if the little Switch that could makes the cut, too.

Anyway, SNK has a lot of good things cooking in the oven, and gamers are probably, definitely going to want to keep an eye on the company if they enjoy fun games that retain their fan-service, because we all know you won’t be getting it from Western developers.

(Thanks for the news tip Baka Gamer News)