Some users have reported that in addition to 3D Realms and Voidpoint banning discussion of Ion Fury’s censorship that was instituted due to coercion from ResetEra, they are also flagging and banning some negative reviews of the game.

Journalist Ian Miles Cheong has the most high profile review ban floating around in public, which he shared via a tweet on August 20th, 2019.

If the developers want to treat their customers like trash then a review that reflects that is absolutely valid.

3dRealms and the makers of Ion Fury banned me from the forums for posting this review of their game on Steam. You can thumbs-up the review so everyone else sees it on the front page of their store.https://t.co/ShfeBy4DxJ pic.twitter.com/DyJj5bl5A0

Some people tried to justify the ban by claiming that he was complaining about the sociopolitical frisson that surrounded the lead-up to the censorship and community bans, rather than talking about the game itself.

A few people defended the censorship of the review, saying that complaining about the circumstances surrounding the game wasn’t properly reviewing the game.

Read the Steam review rules. They are clear: they have to be due to game actions, or things that specifically deal with the game as a whole. At no point did you actually connect the actual GAME portion to the developers behind it, you just complained about the devs.

Those on KotakuInAction2 felt differently, though. Keep in mind that Voidpoint and 3D Realms have banned discussion of the censorship and ResetEra on the forums and community threads for Ion Fury, so people rightfully upset about that are unable to discuss it in the forums. So where else can they discuss their frustrations with the censorship, the bullying, and the sociopolitical authoritarianism that surrounds the current controversy? The reviews.

If they paid money for the product and customers are unhappy with how that product changed due to outside circumstances, they have every right to express that discontent via the reviews.

Well, Ian Miles Cheong wasn’t the only one was affected by the attempt to quell the outrage over Voidpoint and 3D Realms turning their backs on gamers.

User Ice Dagger shared a screenshot of their negative review of Ion Fury, which was also flagged by Voidpoint and 3D Realms as being “abusive”, because he wrote… 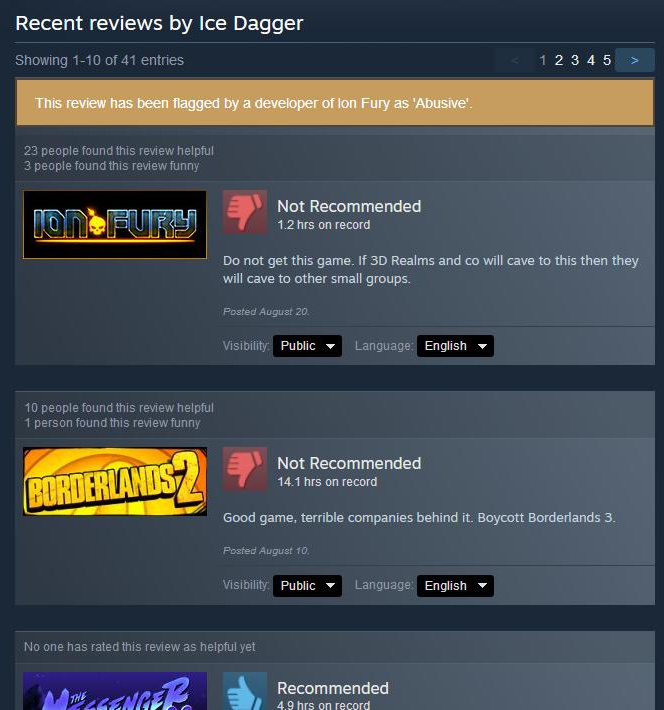 However, hours later Ice Dagger informed us that 3D Realms and Voidpoint later rescinded the abusive flag on his review, and now the review is up and available without any problems. 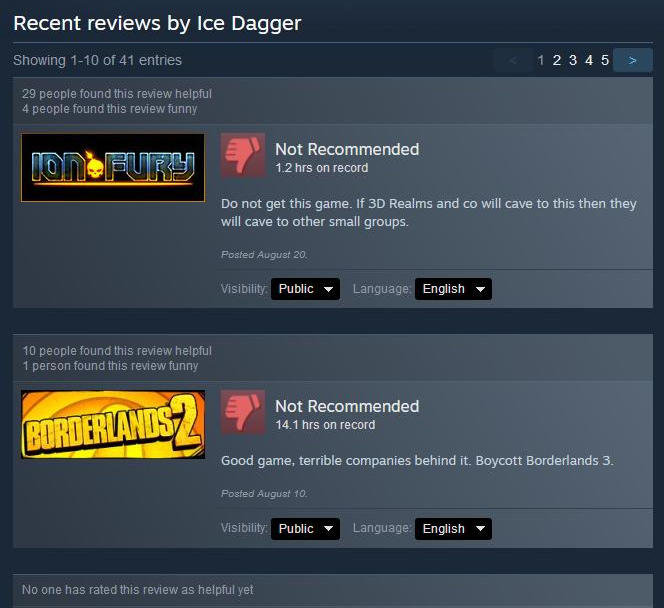 Others weren’t so lucky.

Steam user SteveHNO96 had his review flagged for “abuse” even though he avoids mentioning politics in his review of Ion Fury. 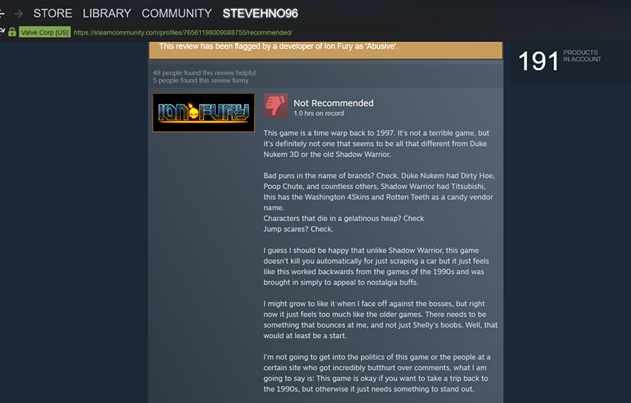 And in another case, a user who stated that Ion Fury was an excellent game but that the whole situation involving the censorship was mired in sociopolitics brought about by ResetEra, had his review flagged and removed. 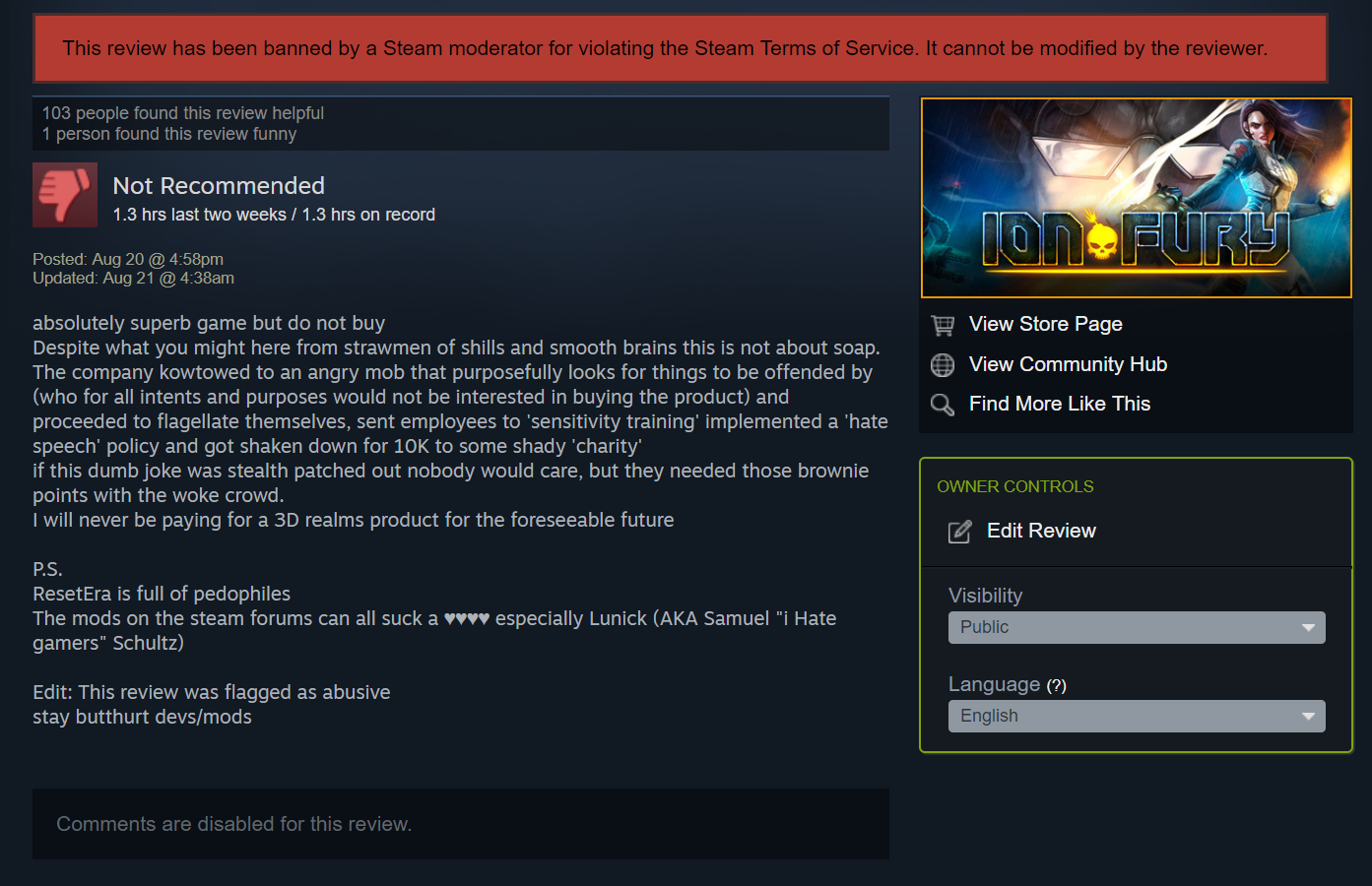 Regardless of people trying to justify the censorship, which is in itself deplorable, actual customers are still giving Ion Fury negative ratings because they refuse to allow gaming to become a conduit for degenerate sociopolitical views to run rampant and unchecked.

This has resulted in Ion Fury’s user review rating dropping drastically over the last two days from “Overwhelmingly Positive” down to “Mixed”.

People are rightfully review-bombing the game due to the developers’ censorship antics, outright saying that they “hate gamers”, and trying to hide and censor negative reviews that censured them for censoring their game! And it’s not limited to Steam. Metacritic is getting hit with a deluge of negative reviews, too. 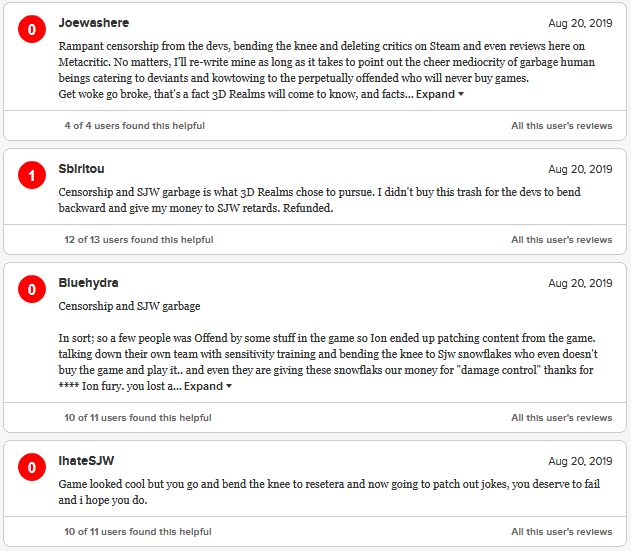 When repeatedly confronted about their antics on Twitter, Voidpoint somewhat relented by suggesting people simply “pirate the game”, as reported by Niche Gamer.

This whole thing has spiraled well out of control, and 3D Realms and Voidpoint have no one to blame but themselves. All they had to do was ignore ResetEra’s buffoonery and carry on about their business. Instead, they decided to apologize for correctly stating that people trying to transition newborns aren’t fit to be parents, and then they decided to give $10,000 of Ion Fury’s revenue, composed of YOUR money, to the LGBTQIA+ organization known as the Trevor Project, and then they decided to censor their own game, proclaim they “hate gamers”, ban people from mentioning ResetEra in the forums, ban people from discussing the censorship, and then flag negative reviews pointing out why people are getting refunds and downvoting the game.

Basically, for any and every indie developer out there, this is a prime example of how not to market your game. Unless you think spending several years working on a passion project just to see it fail due to stupidity and degenerate sociopolitical ideologies is your idea of success.

(Thanks for the news tip Jack Thompson and Zero Eternity)

As a bonus, Sgt Mark IV, the creator of Brutal Doom, left this message for Voidpoint on the forums [backup], but in case it gets deleted, you can read it in full below…

“Look, I understand you are trying to protect your employees careers. But this is not the way you should handle things at all.

“Let’s start talking about the notoriety of the events: By yesterday, literally nobody but ResetEra and GameRevolution cared about this drama. Now you are on the front page of Kotaku, IGN, The Escapist and many others. Not your apology painted you as the wrong people, but also made the event more well-known, and now you are getting review-bombed on Steam. These are very clear signs that your strategy didn’t work.

“Before all of this, I didn`t even knew about the existence of ResetEra. I thought all people related to NeoGaf had vanished from the face of the internet after the pedophilia scandal. Now not only you brought them to the spotlight again, you gave them power, you made them right.

“Now, about the ridiculous apology itself. Apologizing for what??? Apologizing for saying that “trans parents should not decide their children sex after birth and mutilate their genitals?” You think this is something wrong? You think this is transphobic? Do you disagree with this statement? Because anybody that believes on this viewpoint may be a potential child molester and should be put in a watchlist. If you apologize for saying that, then that means you defend this viewpoint.

“I have seen SEVERAL trans people both on facebook and twitter defending the dev’s position that he said nothing wrong. So who are you apologizing to?

“And then, censoring the game… that’s just the insult to the injury. The cherry on the top of the shitcake. Who ever mentioned the game itself? Why???

“You opened a precedent. You brought these horrible people to the spotlight. You caused an irreparable damage to the gamming industry. Gaming’s worst problem today is people that does not plays videogames can find themselves comfortable to dictate what videogames should be about, and you are enabling that.

“I really supported this game. I really wanted you to succeed. After all the garbage you all have been through, the ♥♥♥♥ with Pitchford and Gearbox, the Bombshell fiasco, the ♥♥♥♥ with Iron Maiden, you guys deserved to win at least once. I know some of you, I talked to Fred on the ROTT days, one of your spriters (formley known as Mike12) helped me back in the early days of Brutal Doom development, I know you are all nice people and I hope you can all do well, but I simply can’t get behind this. It’s infuriating. I’m sorry guys.

“You can donate 10 grand, or all the money you want to any charity you want to please these bullies, but not with my money. I do not want to support any business that bends its knees to these kind of people and supports censorship. I really hope I can get a refund. Please, at least consider going back on the decision of butchering the game.”