Good Shepherd Entertainment and Ace Team’s The Eternal Cylinder made its debut at GamesCom 2019 in Cologne, Germany this year. The announcement was accompanied by a trailer that clocks in at just under two minutes, featuring one of the most absurd, hilarious, and frankly entertaining concepts I’ve seen in a long time.

So what is The Eternal Cylinder about? Well, it’s about a small hatchling that comes out of a gooey egg and it looks like a cuddly pair of balls with a wobbly penis for a trunk.

So what do you do with this furry Johnson ball-sack? Well, you have to team up with other ball-sacks, and then squeeze yourself into tight holes, squirt oncomers in the face, and attempt to overcome a giant naked deity. You know what the craziest part about it is? This isn’t even an H-game!

So a group of these ball-sacks will journey around the planet, taking on strange alien creatures, working together to solve puzzles, unlock new areas, and ultimately face down against the biggest threat roaming the planet… a giant, eternal cylinder.

This is the kind of game that was probably conceived via a lot of long nights, shrooms, LSD, and a little bit of Pink Floyd.

Anyway, the concept is completely out there, but I like it. We don’t get enough games that grab creativity by the ball-sack and jam it down the hole of productivity. I like that Ace Team decided to do something about it and in a bombastic and original way. 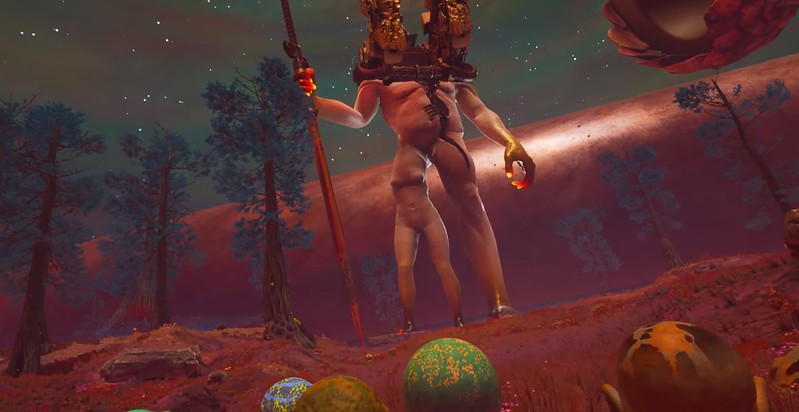 The core of the gameplay revolves around the Trebhums, or the ball-sacks, and you must evolve and adapt them to the procedurally generated environment so that they can overcome the obstacles in their way. Eventually leading to their final confrontation with the eternal cylinder.

The only downside, of course, is that it won’t be coming to Steam when it launches in 2020. According to the announcement, Good Shepherd Entertainment’s title will be an Epic Games Store exclusive for an entire year, which means you won’t see it appear on another PC digital storefront until 2021.

They also have plans on releasing this oddball title on home consoles as well, but it’s not clear if they will launch with the Epic Games Store release or after.

Either way, you can learn more about The Eternal Cylinder by visiting the official website.