While Marvel and DC compete for which company can find a way to bottom out their sales first with woke comic books and hiring in controversial figures like Zoe Quinn to ruin their reputation, other companies are actually trying to grow their product line, grow their readership, and grow their profits. A good example of that is Dynamite Entertainment, whose Vampirella #1 managed to make it into the top charts for comic books in July, earning a pretty penny along the way.

According to Bleeding Fool, the comic has averaged 8/10s from reviewers and has been a big seller at local retailers both locally and internationally. The site wrote…

“Dynamite has been blown away by the reactions from fans, critics and retailers surrounding the launch. Many fans reported that their Local Comic Shops quickly sold out of the issue or other 50th anniversary Vampirella items such as the replica edition of her first appearance. “

Comichron detailed the success of Vampirella, which seemed to come out of nowhere and garner a strong start, moving 170,000 units in total…

“Dark Horse had a strong month year-over-year, while Dynamite saw a jump in dollar sales overall with Vampirella #1, which ranked tenth in dollars. The publisher reports it sold 130,000 copies, including for the overseas market and 40,000 to creators directly; the figure in the chart below reflects just the domestic sales through Diamond, and the returnability deduction.”

Diamond shipped more nearly 77,000 physical units to retailers during the month of July, so it’s off to a solid start.

This is all part of Dynamite’s tribute to the character, celebrating the 50th anniversary, which included variant cover art from artists like Lucio Parrillo to highlight Vampirella’s highly charged sex appeal. 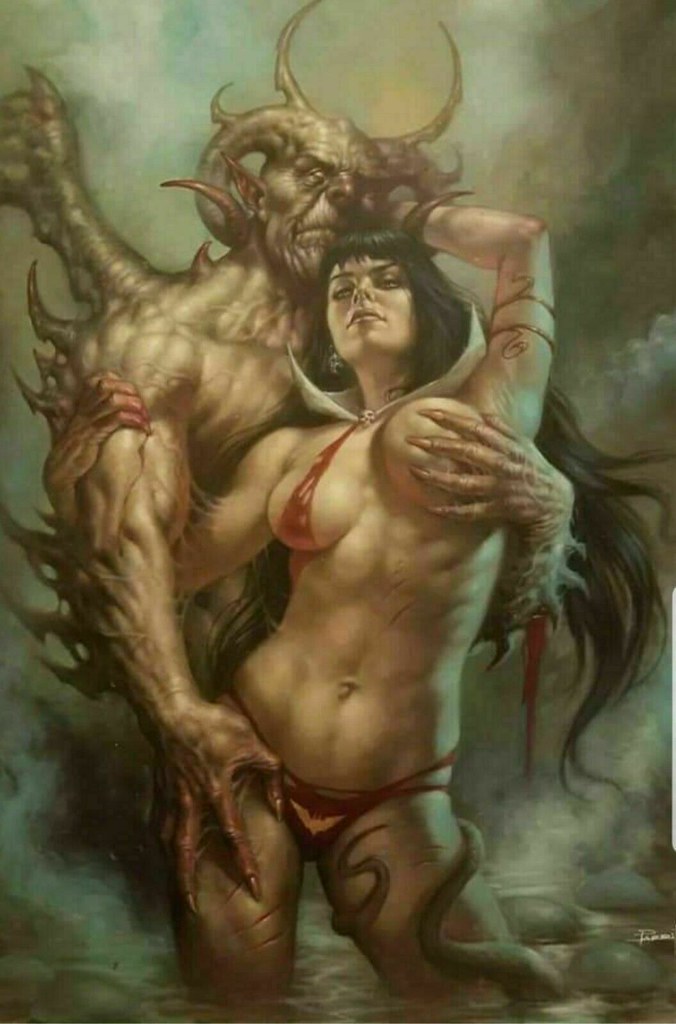 This basically goes to show that opposite of Marvel and DC, who have continually de-sexualized their characters and moved away from fan-service, giving your fans something to sink their teeth into can actually help your product sell more and sell better than ever. Coupling it with a riveting story and compelling characters can move it beyond niche and into more mainstream circles if the positive word-of-mouth and user reviews maintain their momentum.

The only question left is if they can maintain this momentum heading into the second issue?

(Thanks for the news tip FlutterDash)