YouTuber Knight SGC uploaded a music video of Sabaton’s “Ghost Division”, which featured World War II imagery, and YouTube decided it was “hate speech” and had it removed.

Knight SGC made a post about the removal of the music video on August 1st, 2019, while sharing YouTube’s community notice about why they removed it. Knight SGC wrote…

“Well they removed the Ghost Division video for “Hate Speech” even though it didn’t feature anything that was glorying or inciting violence against other people or encouraging hatred. Funnily enough there are more popular re-uploads of my video by countless of people (including the one that has 500k) that has not been affected. If you want to see the video I uploaded it to Bitchute a while back or just check the re-upload by

”злодейский Ломбардо
(sadly he didn’t really give any credit) Also Deus Ex Mau5 re-uploaded the video a while back so I’ll link it as well.

“HUGE REMINDER: YT is no longer a free speech platform so please keep the comments clean as I don’t want videos or the channel itself getting taken down. 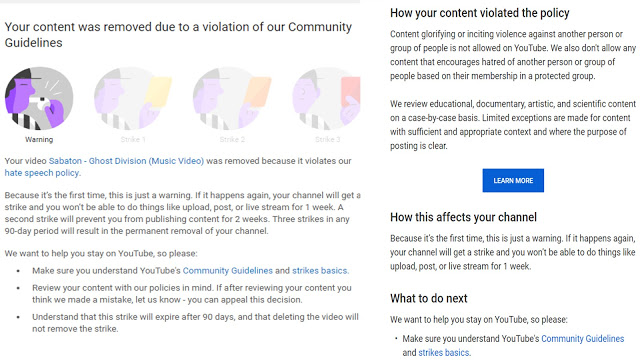 As noted by Knight SGC, it’s bizarre that they removed the music video for “hate speech”, but they haven’t touched some of the other re-uploads, like the one made available by злодейский Ломбардо, which you can still view below.

That re-upload was actually from back in may of 2017, and has more than 513,000 views, which Knight SGC points out in his comment above.

So why did YouTube target Knight SGC and not the Russian chap who re-uploaded the video? Not sure.

However, Knight SGC hasn’t been waiting around to feel the burn of banishment at the Holomodor-inspired hands of YouTube’s Communists, and decided to open his own BitChute channel.

He also re-uploaded Sabaton’s “Ghost Division” to Bitchute, which you can view below.

YouTube has been on a banning spree lately. They’ve been removing users, content, and terminating channels en masse.

Majority of their targets so far have been anything related to historical European culture, including channels like Dr. Ludwig’s historical folk songs or Dero Volk’s national anthem channel.

The mega-corporation has been using the nebulous “hate speech” rule as a wide-sweeping brush in which to paint anyone who isn’t ideologically kosher as violators of their community guidelines. Even if it’s content as benign and innocuous as family folk songs.

(Thanks for the news tip J. Black)