Rio de Janeiro mayor, Marcelo Crivella, ordered Marvel’s Avengers: The Children’s Crusade to be banned from the Riocentro Bienal do Livro festival and from store shops for containing LGBTQIA+ content, specifically a gay kiss between the underage characters Wiccan and Hulking.

According to The Hollywood Reporter, the message about the ban was accompanied by a video from Crivella that was posted on Twitter on September 5th, 2019, claiming that the removal of the comic book from shops was to protect the kids.

However, that’s not really the whole story.

You see, it had less to do with the gay kiss and more to do with warning labels.

Brazilian outlet Estadao goes more in-depth about the matter, explaining that fictional media that contains sexual content aimed at kids need to have warning labels. This is actually part of Brazilian law, specifically the Statute of the Child and Adolescent.

The president of the ECJ explained…

“It is clear that the legislature does not absolutely prohibit the circulation of inappropriate or inappropriate material for children and adolescents, but only requires commitment to the duty of warning, besides making it difficult to access their interior through the seal. packaging (art. 78) ”.

“Subsequently, when dealing specifically with publications aimed at the public protected by the Statute, which constitutes a vulnerable community, it repels any content that is outrageous to ethical, moral or aggressive values ​​to the person or family,”

Some critics of the move argued that the Marvel comic doesn’t contain explicit nudity or sexual content, and therefore it’s not in violation of the Child and Adolescent statue.

However, the judge presiding over the matter detailed that there should have been warning labels on the comic so parents could be properly informed about the comic’s material, rather than being blindsided by it after purchase, saying…

“[T]here was no impediment or embarrassment to freedom of expression, because, in the case of superhero work, attractive to the juvenile public, which addresses the issue of homosexuality, it is necessary that parents are properly warned, with the access to information about the content of free trade publications before deciding whether or not that text fits your vision of how to educate your children.”

This is basically the crux of the matter.

The mayor didn’t have the book banned because of the gay kiss, but because the gay kiss was featured in a comic book aimed at adolescents without any warning labels about the content contained therein.

If you’re a parent, you would never suspect that a comic called Avengers: The Children’s Crusade contained a gay kissing scene. If you’re not okay with that kind of content, or don’t want your kids being exposed to it, there should be warning labels present. 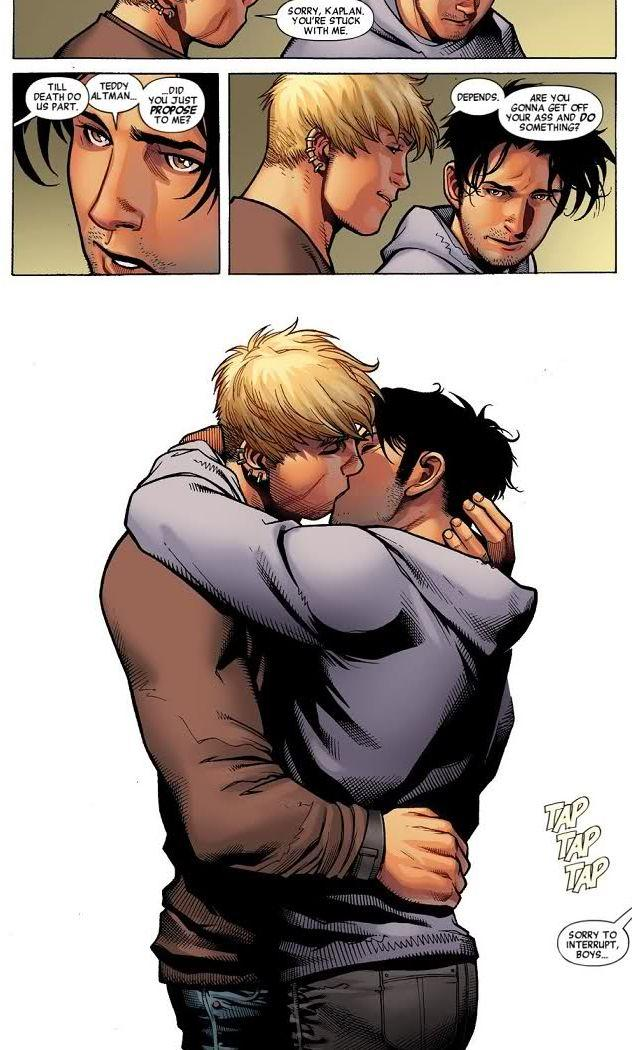 LGBTQIA+ make up for a minor fraction of the population, and so it’s not the norm. Some people don’t want their kids exposed to that kind of content and so it should be up to the parents to decide if they think that’s okay for their kids to experience.

That being said, going to the extreme of banning the book from stores and festivals because it didn’t have a warning label is beyond the pale.

As noted in The Hollywood Reporter article, the series originally had a short run between 2010 and 2012. It only found its way to store shelves in Brazil later into 2012, with a special edition being made available in 2016. So this wasn’t a new comic, and even then the attempts to remove the comic from the store shelves proved somewhat fruitless since most comic book shops no longer carried the book.

Now some outlets are trying to make it like the book was popular and sold out due to its popularity. This is false. The Children’s Crusade run was never popular. You can check the Comichron sales listings throughout 2010, 2011, and 2012 and the book basically hovered around the 30,000 mark, as evident in the 2011 sales charts.

The proper course of action would have been to simply have the books redistributed with a warning label to coincide with the law, and call it a day. For people who want to indulge in Left-wing propaganda, they can. For people who don’t? Well, there’s a warning on the comic so you know what you’re getting into or what you want to avoid.

Now the book isn’t permanently banned, it’s still allowed to be sold but will require the warning label before it can be redistributed.

It’s funny because in some ways the Rio government is basically doing what Valve is doing with adult games on Steam, claiming that the comic violates the law and needs a warning label while banning it from store shelves. The big difference is that Lefties and Centrists™ will defend Valve for banning games from Steam – even if they contain no adult content or have no nudity, like some of the games on the Waifu Holocaust 2.0 banned game list – but they will be absolutely incensed about Rio’s mayor attempting to ban a comic book for not having a warning label on the cover.

But people who justify and condone censorship will eventually be met with it at some point in time, which is why the only thing we can do here is say… “We told you so.”