Koei Tecmo and Gust released a brand new reveal trailer for the upcoming Fairy Tail game based on the anime of the same name. Longtime manga artist Hiro Mashima is supervising the project and the game itself seems to take some of the typical elements one might expect from a Koei Tecmo-produced title, and slaps it into a hack-and-slash RPG adventure.

The teaser trailer doesn’t showcase any gameplay, but it does give you a glimpse at a few of the characters and what you can expect from the visuals. Also, it confirms that there is definitely some fan-service on display, but whether or not it actually makes it into the final version of the game is a completely different matter.

While the trailer doesn’t do anything to explain the plot or gameplay mechanics of Fairy Tail, the actual YouTube description does.

Players will join Natsu Dragneel and Lucy Heartfilia and the Fairy Tail mage guild as they venture throughout the land of Fiore, battling a number of foes and monsters alike, including evil wizards, dark mages, demons, dragons and cats.

Visually the game doesn’t break any new ground. It looks like the typical anime cel-shaded affair, much like the typical PS2 and PS3 games of old just with higher-poly models. If you were hoping for some Arc System Works-tier designs, you do better waiting for Granblue Fantasy: Versus or the upcoming Guilty Gear game, also due for release in 2020. 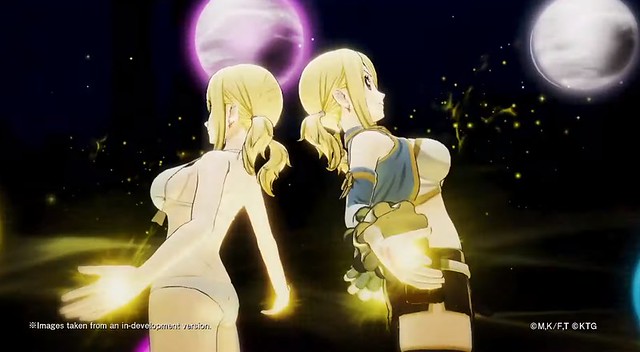 Of course, the one thing that stood out the most to me was the fact that there was fan-service on display. Panties and bra with big boobs.

With Sony’s censorship policies in effect I would have imagined that kind of imagery would have been barred. Then again, the night is still young and the cucks are still censorious.

It’s quite possible that leading up to release the Censorship Officer from Sony’s California branch will tell Gust to cover up the tiddies (but hopefully that’s not the case).

Anyway, we’ll find out more about Fairy Tail at the Tokyo Game Show, where more info and gameplay will presumably be revealed for the general public.