“We’re writing to let you know that your account features will remain limited for the allotted time due to violations of the Twitter Rules, specifically our rules against abusive behavior.

“To ensure that people feel safe expressing diverse opinions and beliefs on our platform, we do not tolerate behavior that crosses the line into abuse. This includes behavior that harasses, intimidates, or uses fear to silence another person’s voice.

In case you doubt the veracity of Twitter’s statement, a copy of the e-mail can be read below via the image. 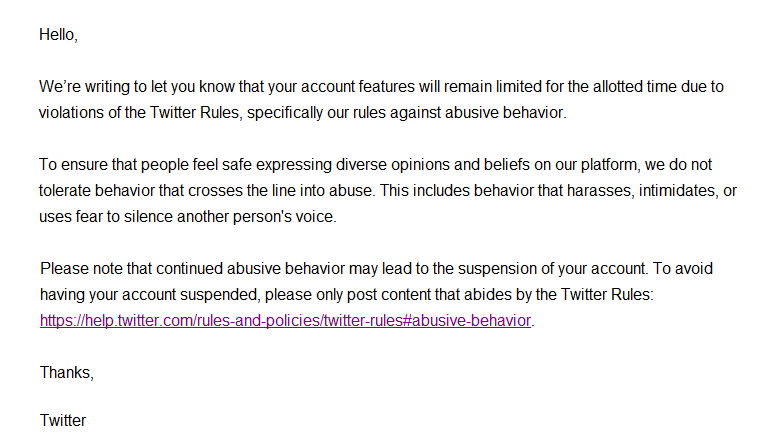 [Original article:] One Angry Gamer’s time on Twitter is winding down. Nearly every post is targeted by activists who hate OAG, who hate the fact that we criticize propaganda, and who hate the fact that we’re one of the only few voices to outwardly, proudly, and unabashedly stand up against the authoritarian sociopolitical regimes that control today’s society. This is why we’ll be posting more frequently on the One Angry Gamer Gab account.

In the e-mail message from Twitter support a message was sent in the afternoon stating that the One Angry Gamer Twitter account was suspended for violating the rules due to… nothing. You can read the e-mail below. 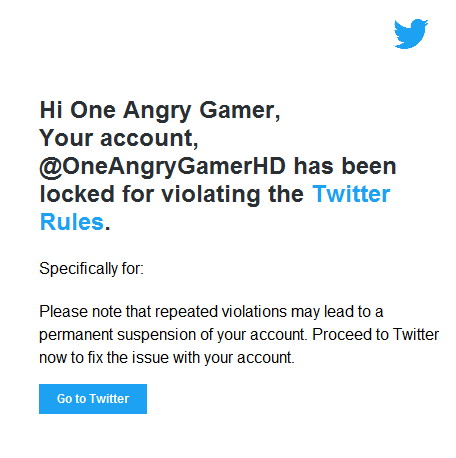 Where it says “Specifically for:” there’s supposed to be a description of sorts so you know what you were suspended for. This gives you an idea of what you can change or whether or not there’s a tweet you should delete, or maybe you said something that was “wrong” in the eyes of Twitter support. In this case they don’t even have an actual example of how the rules were violated… they just were. 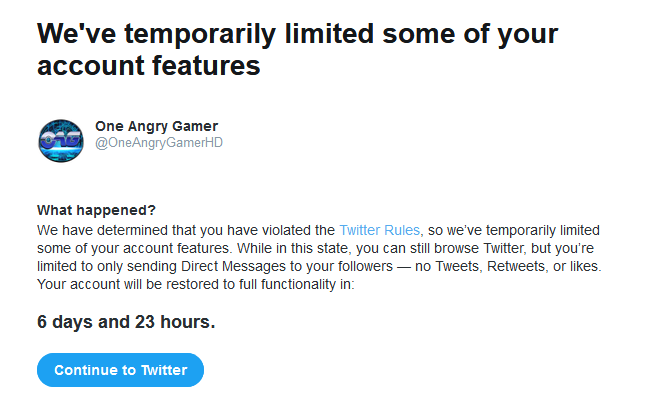 If you click on the link about the “Twitter Rules” it takes you a page that lists all the possible rules that you could have violated, from “harassment” and “hateful content”, to “self-harm” and “glorification of violence”.

The last tweet on the account before the suspension was posted three hours earlier, it was about the game Morningdew Farms.

The tweet is still live, so obviously it wasn’t in violation of Twitter’s policies.

Usually if a tweet violates Twitter’s ever-tightening rules, they require you to identify and delete the tweet. So far, no tweets have been identified as being in violation of Twitter’s rules.

It could be mass reports or it could be Twitter staff being butthurt over our content, it’s anyone’s guess since the platform is entirely Left-standing when it comes to enforcing ideological tyranny on its users.

In any case, while an appeal was made, in the meantime you won’t be able to receive any news at all about any of our content from Twitter. So you can follow us over on the One Angry Gamer Gab account.

We’ll be posting our content more frequently over there.

The only reason we haven’t been using Gab more frequently is because there are no social media plugins that include Gab in the line-up. This means that in order to publish content to Gab you have to do it manually each and every time, which can be time-consuming. However, in this case it’s going to become mandatory since it’s one of the only platforms left where we can still post uninhibited.

Even if/when the One Angry Gamer Twitter account is restored, it’s just a matter of time before the people who hate the site eventually get the account permanently banned, and it’s going to happen sooner rather than later.