The Coalition and Microsoft must recognize that Gears 5 is looking awfully sparse in the testosterone department, and decided to give it a much-needed shot in the arm by introducing a celebrity fan of the series to the multiplayer mode, and it’s none other than former professional wrestler and Marvel movie star, Dave Bautista.

The announcement was made with a little 30 second trailer featuring the muscle-bound actor wielding a Lancer and donning the traditional Cog armor. Instead of wearing a bandanna or some other kind of protective gear, he’s outfitted in some slick sunglasses. You can check out the trailer below.

The in-game model looks pretty sweet, and from the sound of it I’m guessing The Coalition got Bautista to voice his own character.

Interestingly they use his WWE ring-name “Batista” instead of his actor name. Anyway, I haven’t had much of anything positive to say about Gears 5 until today. That trailer really is badass.

Having the character introduced by punching enemies into a pulp, laughing maniacally, and blasting guys to bits with the Lancer while Saliva’s “I Walk Alone” plays in the background is pure genius! 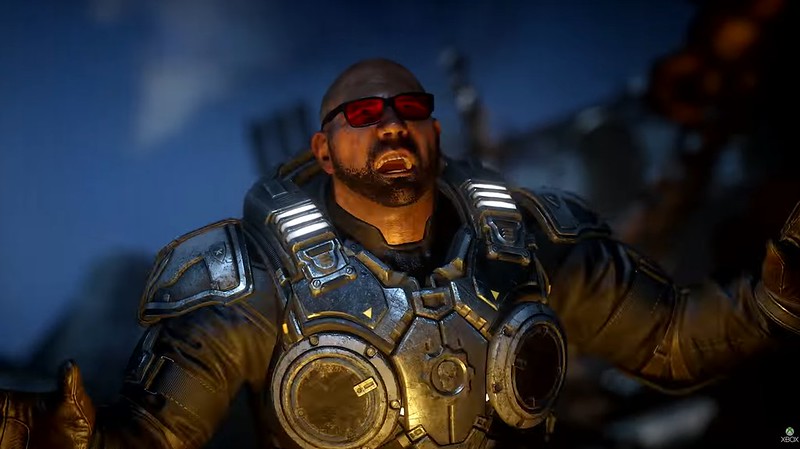 But you know what would have been even better? If Bautista was actually the star of Gears 5. Now THAT would have secured a day-one purchase from me.

Heck, even Bautista wanted to star in the movie way back when, in which he would have made a perfect Marcus Fenix on the silver screen.

Unfortunately, we can’t have muscle-bound, testosterone-driven men leading the charge in video games these days, and The Coalition and Microsoft felt like they would rather pass up all the dollar bills real hardcore gamers like myself would have been willing to impart for the opportunity play as a real man in a no-holds-barred third-person shooter. Instead, the duo decided to head in the direction of making Gears 5 a feminist propaganda piece. This menas people like myself are no longer the target audience for their little social engineering experiment being propped up by the likes of Facbeook.

That being said, you can look for the phantom-audience magnet that is Gears 5 to launch on September 15th, 2019 later this month for Xbox One, the Windows Store, and on Steam for PC.