Following up on the release of Monopoly Socialism back in August, Hasbro has announced that it’s working on bringing Ms. Monopoly to the coffee table of family game night later this month for $19.99. The theme of the game? Addressing the mythical unicorn that has feminists caught up in a windmill by their furbelows: the gender pay gap.

USA Today is reporting that the board game is designed specifically to tackle the gender pay gap and other feminist talking points. Jen Boswinkel, the senior director of global brand strategy and marketing for Hasbro Gaming, explained to USA Today…

“With all of the things surrounding female empowerment, it felt right to bring this to Monopoly in a fresh new way. It’s giving the topic some relevancy to everyone playing it that everybody gets a turn, and this time women get an advantage at the start.”

Then it’s not really about equality, right?

The subject matter was deconstructed and lampooned by Sargon of Akkad on his Thinkery channel, which you can check out below.

Now if you’re not keen on watching the video, it’s explained, debunked, and reiterated time and time across multiple articles that the gender pay gap is a myth.

“The official Bureau of Labor Department statistics show that the median earnings of full-time female workers is 77 percent of the median earnings of full-time male workers. But that is very different than “77 cents on the dollar for doing the same work as men.” The latter gives the impression that a man and a woman standing next to each other doing the same job for the same number of hours get paid different salaries. That’s not at all the case. “Full time” officially means 35 hours, but men work more hours than women. That’s the first problem: We could be comparing men working 40 hours to women working 35.” 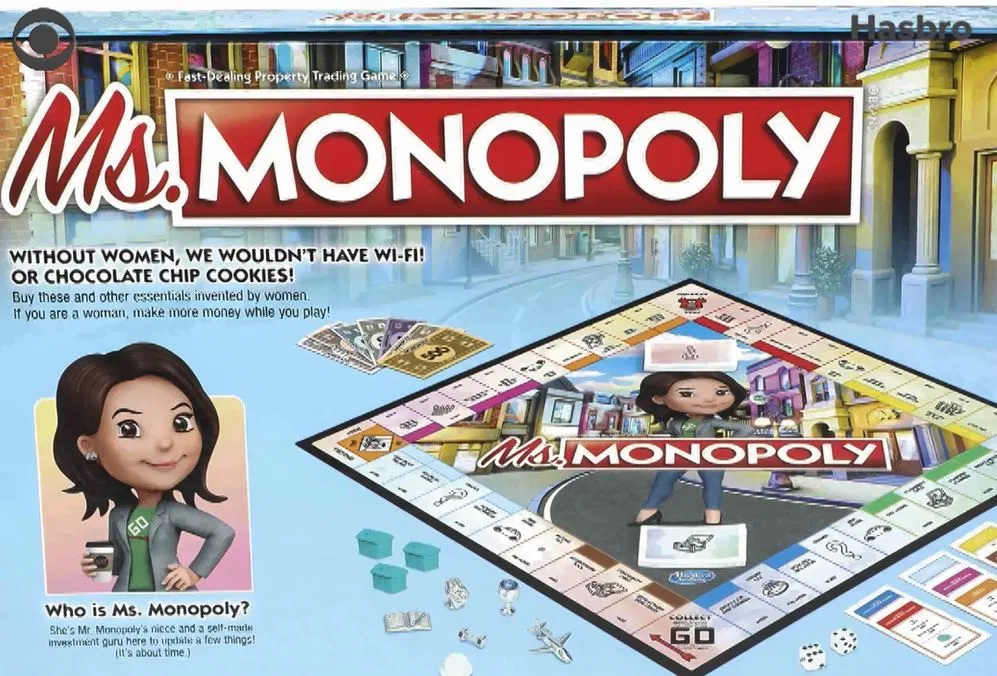 Hilariously enough Asian men out-earn white men (and everyone else for that matter) by an inescapably large margin… 117% according to the Pew Research Center. Asian women out-earn everyone but white and Asian men. I guess that’s why they have an Asian-looking woman on the Ms. Monopoly box, eh?

I wonder if there will be community cards in there that allows you to get paid even while on maternity leave? Or cards that allow you to negotiate additional salary when you’re cranky and bloated during certain times of the month? I wonder if you’ll also be able to pull a sexual harassment card and get severance pay after accusing the autistic shut-in with the thick bifocal glasses of having brushed up against your shoulder that one time while he was walking past the chair in the cramped little cubicle?

But Hasbro doesn’t care about the numbers, they care about indoctrination.

This isn’t about teaching people about the truth, or informing them about the way the labor market works, it’s about keeping women enslaved to the idea of cultural oppression foisted upon them by the feminist grifters of today’s society. It’s about subjugating men to a bombardment of agitprop designed to keep them under heel.

Hopefully, much like Gillette, Hasbro will have to learn the hard way that trying to sate the tempest that is outrage culture will only result in ruination, and it will make them a prime piece of real estate to fill out the ever-growing Get Woke; Go Broke master list.

(Thanks for the news tip Bulkzerker)